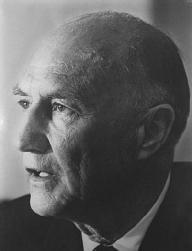 James Strom Thurmond began serving as U.S. senator from South Carolina in 1954; when he died at the age of one hundred in 2003, he was the oldest and longest-serving senator in U.S. history. An outspoken opponent of federal Civil Rights legislation for most of his career, Thurmond softened his views in the 1970s. He remained a controversial political figure, however, until the end.

Thurmond was born on December 5, 1902, in Edgefield, South Carolina. Thurmond's father, John William Thurmond, was an attorney who served as county prosecutor and later as U.S. district attorney. He was also a powerful political leader in Edgefield County. Strom, as he preferred to be called, graduated from Clemson University in 1923. He was a teacher and athletic coach in several South Carolina school districts before becoming superintendent of education for Edgefield County in 1929.

While serving as superintendent, Thurmond studied law under his father, who had become a state judge. In 1930, Thurmond was admitted to the South Carolina bar. He became a full-time attorney in 1933 and soon became county attorney. It was then that Thurmond decided to pursue a political career. He was elected as a state senator in 1933, serving until 1938, when he gave up his office to accept an appointment as a state circuit judge. He took a leave of absence in 1942 to serve with the 82nd Airborne Division during World War II.

On his return to South Carolina, Thurmond resumed his political career. He was elected governor in 1947, serving until 1951. Thurmond believed, as most southern Democrats did, that state-enforced racial Segregation was legitimate public policy and that the federal government had no authority to end it. At the 1948 national Democratic Party convention, southern Democrats on the platform committee removed President Harry S. Truman's proposals for civil rights legislation. When the convention, under the leadership of hubert h. humphrey, restored Truman's proposals, many southern Democrats, including Thurmond, walked out of the convention and started a splinter party, the States' Rights Democratic party. It was popularly known as the Dixiecrat party.

"I don't know how I got such a reputation as a segregationist. … I guess it was because when I was the governor of South Carolina it was my duty to uphold the law and the law required segregation, so I was just doing my duty."
—Strom Thurmond

The Dixiecrats nominated Thurmond to run for president in the 1948 election. President Truman won the election, winning 28. Republican nominee thomas e. dewey won 16 states, and Thurmond won four southern states, the third largest independent electoral vote in U.S. history. Thurmond left the governorship in 1951 and resumed the practice of law in Aiken, South Carolina. In 1954, he was elected to the U.S. Senate as a write-in candidate, the first person ever to be elected to the Senate or any other major office by this method. He took the unusual step of resigning in April 1956 to fulfill a 1954 campaign promise that he would allow a Referendum on his service in two years. He was reelected in November 1956 and again in 1960, 1966, 1972, 1978, 1984, 1990, and 1996.

During the 1950s and 1960s, Thurmond was a leading opponent of federal civil rights legislation and social Welfare programs. His opposition to the Civil Rights Act of 1964 (42 U.S.C.A. § 2000a et seq.) and President Lyndon B. Johnson's policies led Thurmond in 1964 to switch to the Republican Party. Changing political parties is always unusual for political leaders, but it was especially so for Thurmond. The Democratic Party dominated the southern states, making them virtually one-party states. Thurmond's defection to the Republican Party was a significant act, signaling a major shift in political power in the South that would accelerate in the 1970s and 1980s.

For much of his Senate career, Thurmond served on the Armed Services Committee, the Judiciary Committee, and the Veterans' Affairs Committee. From 1981 to 1987 he was chair of the Judiciary Committee, where he helped President ronald reagan secure Senate confirmation of his judicial appointments. During this period he was also president pro tempore of the Senate. The president pro tempore presides over the Senate when the vice president is absent. From 1988 to 1996 Thurmond chaired the Armed Services Committee.

Thurmond served as adjunct professor of political science at Clemson and distinguished lecturer at its Strom Thurmond Institute. His name has been attached to many public buildings, highways, and other public works in South Carolina.

After Thurmond's 1996 reelection, he announced he would not run again but would finish out his term. In 1997, at age 94, Thurmond, who had served in office during the terms of ten U.S. presidents, became the longest-serving senator in U.S. history. In 2001, Thurmond, who had been hospitalized several times, took up permanent residence at Washington's Walter Reed Army Medical Center. In 2002, South Carolinians elected Republican Lindsey Graham to replace Thurmond, whose term expired in January 2003.

A nostalgic reference to Thurmond's past became the subject of controversy when staffers and friends held a 100th birthday party for him in December 2002. At the party, which was attended by numerous current and former staff, legislators, and lobbyists, Republican Majority Leader trent lott hailed Thurmond and stated that if others had followed the example of Mississippi and voted Thurmond president in 1948, the country "wouldn't have had all these problems over all these years." Lott's remark about the days of the Dixiecrats and the platform of segregation proved so controversial that Lott was forced to resign his position as majority leader. Thurmond was in such frail health that it was unclear whether he was aware of the impact of the event. His health failed to improve over the next several months, leading to his death on June 26, 2003, in Edgefield, South Carolina.

Feedback
Flashcards & Bookmarks ?
Please log in or register to use Flashcards and Bookmarks. You can also log in with
Flashcards ?
My bookmarks ?
+ Add current page to bookmarks
References in periodicals archive ?
A retired Los Angeles teacher has broken a lifetime of silence to announce she is the illegitimate mixed-race daughter of the former US senator, James Strom Thurmond, once the nation's leading segregationist.
Essie Mae Washington-Williams; James Strom Thurmond admitted Essie Mae Washington-Williams was a friend
Senator's big secret is out in the open
Legal browser ?
Full browser ?
CITE
Site: Follow: Share:
Open / Close