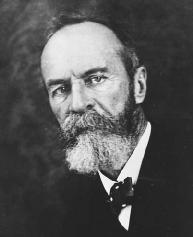 William James was a popular and influential philosopher whose writings and theories influenced various areas of U.S. life, including the movement known as Legal Realism.

James was born in New York City on January 11, 1842, to Henry James Sr. and Mary Walsh James. Comfortably supported by an inheritance, his parents stressed their children's abilities to make independent choices. James's formal schooling was irregular, and he studied frequently in England, France, Switzerland, and Germany. James pursued an enduring interest in the natural sciences, earning a medical degree from Harvard University in 1869, though he never intended to practice medicine. He joined Harvard's faculty in 1872, teaching anatomy and physiology. He was also interested in psychology and philosophy, seeing these as related fields through his grounding in scientific studies. He began teaching those disciplines at Harvard in 1875 and 1879, respectively. He retired from the Harvard faculty in 1907.

In his first major work, Principles in Psychology (1890), James began to articulate a philosophy based on free will and personal experience. In a theory popularized as stream of consciousness, James argued that each person's thought is independent and personal, with the mind free to choose between any number of options. The subjective choices each individual makes are determined by the interconnected string of prior experiences in that person's life. In James's thought, choice and belief are always contingent, with no possibility for some permanent, definitive structure based outside of personal experience. James's Pragmatism: A New Name for Some Old Ways of Thinking (1907) developed further his idea that knowledge, meaning, and truth are essentially the result of each person's understanding of the experiences in her or his life. Mere formalism has no absolute authority; personal experience forms the framework of belief and action for each individual.

These important elements provided the basis for the movement known as legal realism. James's rejection of immutable truths in favor of experience as the mode to interpret reality was picked up by Roscoe Pound, oliver wendell holmes jr., and others in the 1920s and 1930s as a challenge to the prevailing belief that legal principles are based on an absolute structure of truth. Legal realists connected law with social and economic realities, both as legislated and as ruled on by courts. They argued that law is a tool for achieving social and policy goals, rather than the implementation of absolute truth, whether or not it is consciously treated that way. James's empiricism, based on experience as the root of human action, had a corollary within legal realism's use of social science as an analytical tool within law.

Though legal realism as a movement was considered to be played out by the 1940s, the belief that varied forces influence the actors and changes within the legal system has become more standard than the view that legal principles are immutable truths. James provided the philosophical underpinning for this shift in thinking.

"All the higher, more penetrating ideals are revolutionary. They present themselves far less in the guise of effects of past experience than in that of probable causes of future experience."
—William James