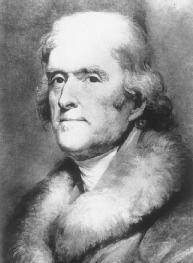 Thomas Jefferson served as an American Revolutionary and political theorist and as the third president of the United States. Jefferson, who was a talented architect, writer, and diplomat, played a profound role in shaping U.S. government and politics.

Jefferson was born April 13, 1743, at Shadwell, in Albemarle County, Virginia. His father was a plantation owner and his mother belonged to the Randolph family, whose members were leaders of colonial Virginia society. Jefferson graduated from the College of William and Mary in 1762, and worked as a surveyor before studying law with George Wythe. He was admitted to the Virginia bar in 1767.

His interest in colonial politics led to his election to the Virginia House of Burgesses in 1769. In the legislature he became closely aligned with Patrick Henry, Richard Henry Lee, and Francis Lightfoot Lee, all of whom espoused the belief that the British Parliament had no control over the American colonies. He helped form the Virginia Committee of Correspondence, which protested legislation imposed on the colonies by Great Britain.

In 1774 Jefferson wrote A Summary View of the Rights of British America, a pamphlet that denied the power of Parliament in the colonies and stated that any loyalty to England and the king was to be given by choice. He attended the Second Continental Congress in 1775 and drafted the Reply to Lord North, in which Congress rejected the British prime minister's proposal that Parliament would not tax the colonists if they agreed to tax themselves.

After the Revolutionary War began, Jefferson and four others were asked to draft a declaration of independence. Jefferson actually wrote the Declaration of Independence in 1776, which stated the arguments justifying the position of the American Revolutionaries. It also affirmed the natural rights of all people and affirmed the right of the colonists to "dissolve the political bands" with the British government.

Jefferson served in the Virginia House of Delegates from 1776 to 1779 and became governor of Virginia in 1779. He was responsible for many changes in Virginia law, including the abolition of religious persecution and the end to entail (inheritance of land through a particular line of descent) and primogeniture (inheritance only by the eldest son). Jefferson also disestablished the Anglican Church as the state-endorsed religion. Jefferson's term as governor expired in 1781, the same year the British invaded Virginia. He was at first blamed for the state's lack of resistance but later cleared after an official investigation.

From 1783 to 1784, he was a member of the Continental Congress, where he contributed a monetary program, and secured approval of the Treaty of Paris, which ended the Revolutionary War. As a member of that congress he also drafted a decree for a system of government for the Northwest Territory, which lay west of the Appalachian Mountains. This decree was later incorporated into the Northwest Ordinance of 1787.

Jefferson served as minister to France from 1784 to 1789. In 1790 he reentered politics as Secretary of State in the cabinet of President George Washington. Jefferson soon became embroiled in conflict with Alexander Hamilton, the secretary of the treasury. Jefferson did not share Hamilton's Federalist views, which he believed favored the interests of business and the upper class. Jefferson, a proponent of agricultural interests, disliked the Federalist's desire to expand the power of the federal government.

The chief dispute between them was over the Bank of the United States, which Hamilton approved of and Jefferson attacked as unconstitutional. Hamilton won the issue, and Jefferson and his supporters began to form a group known as Republicans, which evolved into the current Democratic Party. In 1791 editor Philip M. Freneau published Republican views in the National Gazette, which increased the agitation between Jefferson and Hamilton. Jefferson resigned his position in 1793.

After John Adams was elected president in 1796, Jefferson served as his vice president and presiding officer in the Senate. In 1798 he opposed Congress's adoption of the Alien and Sedition Acts (1 Stat. 570, 596), which provided for the deportation or imprisonment of any citizen or alien judged dangerous to the U.S. government. As a result Jefferson and James Madison drafted the Kentucky Resolutions, which denounced the constitutionality of these acts. These resolutions, which were adopted by the Kentucky and Virginia legislatures, declared that the federal government could not extend its powers over the states unless the Constitution expressly granted authority. The resolutions were the first affirmation of States' Rights and were central to Jefferson's belief that state and local governments were the most democratic political institutions.

The presidential election in 1800 ended in a tie between Jefferson and Aaron Burr. The House of Representatives decided the election. Hamilton, who despised Burr even more than Jefferson, lobbied the Federalists in the House to elect Jefferson. Jefferson won the election and became the first president to be sworn into office in Washington, D.C.

As president, Jefferson reduced spending and appointed Republicans to assume former Federalist positions. He made a lasting contribution to legislative procedure when he composed in 1801 A Manual of Parliamentary Practice, which is still used today. He approved the Louisiana Purchase from France in 1803, and supported the Lewis and Clark Expedition to explore the West from 1803 to 1806. He supported the repeal of the Judiciary Act of 1801, which would have created federal courts of appeals and would have encouraged appeals from state courts.

Jefferson also expressed concern about the decision in marbury v. madison, 5 U.S. 137, 2 L. Ed. 60 (1803), which declared that the Supreme Court could review the constitutionality of acts of Congress. The concept of Judicial Review, which is not described in the Constitution, expanded the power of the judiciary. Jefferson and the Republicans worried that Federalist-appointed judges would use judicial review to strike down Republican legislation.

After he was reelected in 1805, Jefferson encountered the problem of attacks on independent U.S. ships by England and France, which were engaged in war. To discourage these attacks, Congress passed the Nonimportation Act of 1806 (2 Stat. 315), forbidding the importation of British goods, and the Embargo Act of 1807 (2 Stat. 451), prohibiting the exportation of U.S. goods to England and France. These measures proved to be detrimental to U.S. commerce.

After the end of his second presidential term, Jefferson retired to his estate, Monticello. He served as president of the American Philosophical Society from 1797 to 1815 and helped found the University of Virginia in 1819.

"That government is the strongest of which every man himself feels a part."
—Thomas Jefferson

Jefferson's Notes on the State of Virginia, published in 1784 and 1785, remain an important historical resource. Written to a French correspondent, the book contains social, political, and economic reflections that show Jefferson to be a person committed to rational thought. The book also reveals that Jefferson, a slaveholder, believed that African Americans were inferior to whites. Throughout his life Jefferson defended the institution of Slavery, casting a cloud over his professed belief in human dignity.

——. 2003. "Wrestling with Jefferson: The Struggles of a Biographer." New York Law School Journal of International and Comparative Law 22 (spring-summer): 387–404.

Feedback
Flashcards & Bookmarks ?
Please log in or register to use Flashcards and Bookmarks. You can also log in with
Flashcards ?
My bookmarks ?
+ Add current page to bookmarks
Mentioned in ?
References in periodicals archive ?
Slavery and the Democratic Conscience: Political Life in Jeffersonian America.
Slavery and the Democratic Conscience: Political Life in Jeffersonian America
Is it possible that blogging, Facebook "friending," and tweeting might provide similar relief for today's Jeffersonians, nostalgic for their long-lost agrarian Arcadia?
How're ya gonna keep 'em down on the farm?
Most scholars have assumed that Adams wrote in a spirit of revenge against the Jeffersonian Republicans, who had deposed his forebear John Adams.
Henry Adams and the Making of America
Resenting the slights of class, common whites rallied to Jeffersonian and Jacksonian politicians who emphasized the racial superiority of all white men.
Democratic storytelling
Only Friedman thinks public schools have contributed to this stratification, while Jeffersonians see public education as the great equalizer.
Does this election matter?
"After that time it became increasingly Jeffersonian, governed by coercion and the party spirit, its people progressively more dependent and less self-reliant, its decline candy-coated with the rhetoric of liberty and equality and justice for all: and with that decline Hamilton's fame declined apace." Repudiated by ersatz Jeffersonians and Jacksonians of the Left and Right alike, Hamilton, by the mid-20th century, was even being cast as a villain in American fiction and poetry.
Hamilton's legacy
Flaumenhaft successfully disposes of the charge generated by the Jeffersonians that Hamilton was a monarchist, that he sought to erect a monarchy on the ruins of republican government (something that I think that neither Jefferson nor Madison really believed), while at the same time showing how Hamilton attempted to blend the advantages of a monarchy and republic in the American Constitution.
The Effective Republic: Administration and Constitution in the Thought of Alexander Hamilton
Like the early Jeffersonians, he is a deficit hawk who believes that wars aimed at opening markets or "protecting access to energy resources" increase the national debt, benefit mainly the bankers, and oppress the citizenry with higher taxes.
Model citizens: beyond the realist vs. idealist divide
IT WAS SLAVERY, IRONICALLY, THAT DROVE the Jeffersonians to the very egalitarian rhetoric which has enshrined them as the protectors of American liberty.
Learning to love the Federalists
Sometimes additional crotchets creep in, as when Mead dubs the Wilsonians the "Trotskyites" and Jeffersonians the "Stalinists" of the American Revolution.
Special Providence: American Foreign Policy and How It Changed the World. (Books in review: the American way of power)
This essay begins needed empirical inquiry into Ackerman's theory of constitutional development by assessing it in the context of a particular constitutionally significant historical moment: the rise of the Jeffersonian Republicans in 1800.
Dualist constitutional theory and the Republican revolution of 1800
Conservative Jeffersonians (Quids) also valued democracy, but they believed that it flourished best in a nation that actively promoted investment and centralized banking.
Crucible of American Democracy: The Struggle to Fuse Egalitarianism & Capitalism in Jeffersonian Pennsylvania