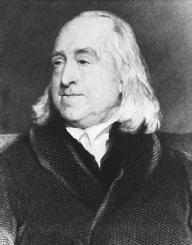 "Every law is an infraction of liberty."
—Jeremy Bentham

Described as a philosopher, jurist, and reformer, Jeremy Bentham is possibly best known as one of the leading proponents of Utilitarianism. Although he was a devoted scholar who spent much of his life writing about legal reform, he published little. Regardless, Bentham had a profound effect on the politics of his day, influenced many of his contemporaries (including eminent British philosopher John Stuart Mill), and introduced a number of terms and definitions, which are still used today in the study of philosophy, economics, and politics.

Bentham was born February 15, 1748, in Houndsditch, near London, into a family of attorneys. He was educated at Oxford and admitted to the bar, but decided not to follow in the footsteps of his father and grandfather. Instead of practicing law, Bentham chose to pursue a career in legal, political, and social reform, applying principles of ethical philosophy to these endeavors.

He was greatly influenced by the work of Claude-Adrien Helvétius, a French philosopher who believed that all persons are intellectually equal and that differences arise solely from educational opportunities. Helvetius also formulated a theory that good is measured by the degree of self-contentment experienced by a person, and that self-interest is the compelling force for all action. This latter belief had a profound effect on Bentham, who incorporated the idea in the formulation of the basic principles of utilitarianism.

In 1789, Bentham gained public attention with the publication of his Introduction to the Principles of Morals and Legislation, which set forth his fundamental principles. He believed that the greatest happiness for the greatest number is the basis of morality. Happiness and pleasure were the same, and included social, intellectual, and moral as well as physical pleasures. According to Bentham, each pleasure has certain characteristics, including intensity and duration, and he established a scale of measurement to judge the worth of a pleasure or a pain.

Bentham further opined that each person strives to do what makes him or her happiest. The happiness of an individual and the General Welfare are complementary; the achievement of the greatest amount of happiness is the goal of morality.

Bentham applied his views to reform legislation, feeling that the purpose of the law was to maximize total happiness within the limitations of government. As a result, he achieved great advances in prison reform, Criminal Law, civil service, and insurance and was active in the compilation of laws into comprehensible text.

Influenced by the work of Italian philosopher cesare beccaria, Bentham formed some harsh notions of punishment, such as his belief that in certain cases torture could be justified. He wrote that punishment was a relatively weak disincentive against Recidivism, and that there is always a risk that an offender will commit another offense. He suggested that torture removes this risk because torture ceases immediately when a subject complies with the demands of authority. Of course, this idea discounts the question of whether the subject can in fact comply.

As a theorist of punishment, Bentham was naturally interested in the English penal system. His studies led him to develop a model of an English prison that applied his theories of punishment to incarceration. He called his model the "Panopticon." The Panopticon was a prison building—and a whole system of incarceration—that allowed guards total surveillance and physical control over prison inmates. Writing of the Panopticon, Bentham claimed that hard labor, constant surveillance and monitoring, and solitary confinement (for purposes of reflection and repentance) were fundamental requirements needed to reform and rehabilitate criminal offenders. This theory builds upon the notion that punishment can be the means to make an offender lead a life of moral and civil rectitude.

Bentham attempted to persuade President James Madison to adopt a code of laws that he himself had devised. The philosopher was careful to cite existing rules and previous cases to illustrate that his legal theories were sound. Madison rejected Bentham's idea in 1811, but in the 1830s, a group of U.S. reformers adopted several of his policies with the objective of formulating a simplified code of law.

When Bentham died June 6, 1832, he left behind a vast number of manuscript pages, as well as a large estate. Funds from the estate were used to help launch University College, London, an institution which was established to educate students excluded from universities of the day. In accordance with Bentham's instructions, upon his death his body was dissected, embalmed, dressed, and seated in a chair. The seated Bentham is housed in a cabinet in the main building of University College.

"Bentham, Jeremy." The Internet Encyclopedia of Philosophy. Available online at <www.utm.edu/research/iep/b/bentham.htm> (accessed May 7, 2003).

Burns, J. H., and H. L. A. Hart, eds. 1970. "Jeremy Bentham." In An Introduction to the Principles of Morals and Legislation. London, England: Athlone.

Feedback
Flashcards & Bookmarks ?
Please log in or register to use Flashcards and Bookmarks. You can also log in with
Flashcards ?
My bookmarks ?
+ Add current page to bookmarks
Mentioned in ?
References in periodicals archive ?
perspectives of Jeremy Bentham and John Henry Wigmore.
ATTORNEY-CLIENT PRIVILEGE: INCARNATION AND INTERPRETATION
rachael.bletchly@people.co.uk HEAD USED IN FOOTIE JEREMY Bentham wanted his head be preserved too - by a process of "desiccation" practised by New Zealand Maoris.
NONSE STUFF A ENSE AND; Madcap 18th century gent who had himself presserved is finally off to US
The Webby index reveals 56 copies of individual works by Jeremy Bentham, with his first appearing in a Sydney booksale in November 1834.
Adam Smith and Jeremy Bentham in the Australian colonies
Dentro de estas ultimas, destaca el panoptico, un proyecto arquitectonico orientado a reestructurar las carceles Europeas que fue disenado y difundido por Jeremy Bentham desde 1786 con la intencion de disminuir el mal social, expandiendo la inspeccion y optimizando el uso de los recursos estatales.
EL PANOPTICO DE BENTHAM Y LA INSTRUMENTALIZACION DE LOS DERECHOS HUMANOS
In his edited works the following series of letters are recorded under the heading: "Panopticon; Or, The Inspection-House: Containing the Idea of a New Principle of Construction Applicable to Any Sort of Establishment, in which Persons of Any Description Are to Be Kept under Inspection; And in Particular to Penitentiary-Houses." The title is then followed by a list of institutions including: "Prisons, Poor-Houses, Lazarettos, Houses of Industry, Manufactories, Hospitals, Work-Houses, Mad-Houses, and Schools." The edited works also contain the added description: "With a Plan of Management Adapted to the Principle: In a Series of Letters, Written in the Year 1787, From Crecheff in White Russia, to a Friend in England" (Jeremy Bentham, The Works of Jeremy Bentham, vol.
Disciplinary technologies and the school in the Epoch of digital reason: Revisiting discipline and punish after 40 years
The ideas go back to Jeremy Bentham, who first idealized a universal, scientific criminal law that was managed by skilful, disinterested officials.
Opposing the rule of law. How Myanmar's courts make law and order
(42.) Jeremy Bentham, A Comment on the Commentaries and A Fragment on Government 424 n.
Introduction to model laws on lighting
(3) To approach this problem, I consider the liberal reformism of Cesare Beccaria and Jeremy Bentham, which helped to pave the way for a transition from irregular, and usually corporal, punishment to the regular, systematic liberal justice system that eschews corporal punishment but relies heavily on incarceration.
"Putting cruelty first": liberal penal reform and the rise of the carceral state
Arguing for gradual total abolition of death sentence even for terror-related crimes, Shah quoted British Philospher Jeremy Bentham to say "one can argue about the effectiveness of the death penalty generally.
GOVT SPOKE IN LAW PANEL WHEELS
Australian and UK contributors working in a variety of fields discuss happiness based on an authentic sense of the self in comparison to lies people tell themselves, economic instruments used to measure happiness, the psychological effects of the Western cultural obsession with happiness, problems with the idea that a positive mental attitude can change reality, the roots of the Western idea of happiness in the oFelicific Calculuso of Jeremy Bentham, happiness as a result of the exploitation of fossil fuels, portrayals in Russian novels from the 19th century, children's literature and happy endings, and happiness in relation to consumption, parenting, health, laughter, self-help, hope after catastrophe, and Australian satire and humor.
On Happiness: New Ideas for the Twenty-First Century