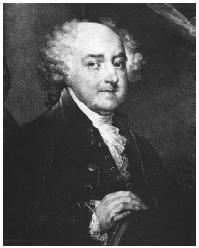 John Adams achieved prominence on many levels—as jurist, statesman, and as the second president of the United States. Known for his sharp diplomatic skills, his flair for words, and his spirited activism, he was an instrumental figure in forging the fledgling nation that would become the United States of America.

Adams was born on October 30, 1735, in Braintree (now Quincy), Massachusetts, the son of a farmer. His parents encouraged him in his studies, and pushed him to enter Harvard College to study for the clergy. Upon graduation in 1755, the strong-willed Adams instead decided to teach and study law. He was admitted to the Boston bar in 1758 and established a prestigious legal practice. During the pre–Revolutionary War years, Adams spoke out strongly against many acts enforced by the British government, including the Townshend Acts, which unjustly taxed items such as glass and tea. He also joined the Sons of Liberty—a group of lawyers, merchants, and businessmen who, in 1765, banded together to oppose the Stamp Act.

From 1774 to 1778 Adams served as the Massachusetts representative to the Continental Congress. He entered the judiciary during this period and rendered decisions as chief justice of the Superior Court of Massachusetts from 1775 to 1777. In 1776, he signed the newly created Declaration of Independence.

"Fear is the foundation of most governments."
—John Adams

After the war, Adams entered the field of foreign service, acting as commissioner to France in 1777. In 1783, Adams went to Paris with John Jay and Thomas Jefferson to successfully negotiate the Treaty of Paris with Great Britain, which officially ended the Revolutionary War and established the United States as an independent nation. In 1785, Adams became the first U.S. minister to Great Britain.

Adams returned to the United States in 1788 and began service to the new government with his election to the office of vice president of the United States. He was the first person to serve in this office and was reelected for a second term in 1792. In 1796, Adams was elected president of the United States. He was the second man to hold this position, following the retirement of the first president, George Washington. During his term of office, Adams advocated naval strength; approved the Alien and Sedition Acts of 1798 (1 Stat. 566, 570, 577, 596), which increased the restrictions concerning Aliens and imposed harsh penalties on any person who attempted to obstruct the government system; averted war with France; and selected the eminent John Marshall as chief justice of the U.S. Supreme Court. In 1800, Adams ran for the presidency for a second term but was defeated by Thomas Jefferson.

Adams's political and personal Jurisprudence was characterized by intense nationalism; some consider him the most influential designer of the new nation's government and identity. A Federalist and a realist who spoke his mind without consideration for political fallout, Adams believed that unchecked power created abuse even in the best of democracies. To that end, he was the most significant advocate for the creation of a balance of powers through a tripartite government: a bicameral legislature, a strong executive, and an independent judiciary. He also authored the state constitution for the Commonwealth of Massachusetts, which remains the oldest functioning written constitution in the world. Adams published a number of political treatises, including Thoughts on Government (1776) and Defense of the Constitutions of the United States of America Against the Attacks of Mr. Turgot (1787).

John Adams sought a written constitution based on unwritten Natural Law. He believed that the Common Law was the source of unalienable, indefeasible rights of men, the honor and dignity of human nature, the grandeur and glory of the public, and the universal happiness of individuals.

John Adams was also a devoted family man. His wife, Abigail, was a vivacious and witty first lady who openly commented on politics and issues of the day. There were five Adams children, including John Quincy, who served as the sixth president of the United States. John Adams died on July 4, 1826, in Braintree.

Feedback
Flashcards & Bookmarks ?
Please log in or register to use Flashcards and Bookmarks. You can also log in with
Flashcards ?
My bookmarks ?
+ Add current page to bookmarks
Mentioned in ?
References in periodicals archive ?
Anonymous rebuttals came from writers styling themselves: "A," "AA," "B," "in short," Sewall wrote, "almost the whole alphabet." (59) Among these replies were a few from John Adams. Writing under the pseudonym "Humphrey Ploughjogger," Adams criticized Sewall's reasoning using homespun country logic, representing the character he was portraying.
The spirit of party: John Adams, Jonathan Sewall, and the role of republican ideology in the coming of the American revolution
John Adams drove the move for independence at the second Continental Congress, secured the American Revolution by guaranteeing its financial underwriting abroad, served as the driving force behind the creation of the U.S.
A Companion to John Adams and John Quincy Adams
Project Appleseed is where you learn things John Adams would like you to learn, as you hear the Story of April 19th (it's not the one you may have heard in school), where you learn a valuable historic skill which has served this country well for centuries.
"Point of order!"
For a list of stockists, call John Adams on 01480 414361.
WIN John AdamsTrash Pack Games and kits... Chipper Club
John Adams: If Parliament had been more reasonable, folks might still be thinking of themselves as citizens of Britain or of various colonies, rather than as Americans.
The Boston Tea Party: a 1773 tax on tea sparked outrage in the 13 colonies. Revolution soon followed
However, the suggestion that the rule of law is a concept that somehow emanated from that founder's overriding concern for the protection of minority rights through ensuring access to the courts does not appear to have strong support in the historical materials I have examined, at least as to John Adams' concept of the rule of law.
Attack on the judiciary?
The role of Sifton's firm in gathering information for the John Adams Project has not previously been revealed.
Spy vs.... lawyer? How human rights advocates investigating torture ended up snooping on the CIA--and in hot water with the feds
John Adams High School chose Pisarkiewicz Mazur & Co, the award-winning New York branding firm, to help them communicate the school's new and exciting learning environment.
PISARKIEWICZ MAZUR & CO Brings Pride and Excitement to John Adams High School Through Branding
18, 2009): Arts: Electric violinist Tracy Silverman, who appears with Eugene Symphony at next Thursday's season opener, asked to clarify some parts of an interview that appeared on Page D1 of Thursday's Arts section about his work with composer John Adams. "Although John Adams and I did improvise together during the writing of "The Dharma at Big Sur," Silverman said in an e-mail, "this was so that John could get better acquinted with the possibilities of this unusual instrument, the six-string electric violin.
VIOLINIST PLUGS IN
MANY viewers will have enjoyed the recent television series on the life of John Adams.
Letter: Welsh roots
THIS week we have a fabulous holiday to America's political centre, Washington, to be won to celebrate the release of 2 politically charged dramas, John Adams and Recount on DVD, courtesy of HBO Home Entertainment.
WIN A FANTASTIC HOLIDAY TO WASHINGTON
She befriended most of the leaders of the American Revolution, including, early in his career, John Adams, who introduced his young wife to this formidable matron, knowing that theirs would be a rare combination of domestic and intellectual compatibility.
Meet Mrs. Warren