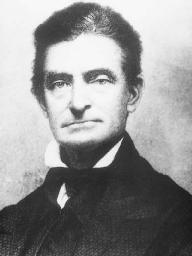 John Brown was a charismatic, stubborn abolitionist who failed at numerous business and commercial enterprises, yet succeeded in convincing men to join him in a cause for which they were willing to die. His abolitionist beliefs translated into violent actions in Kansas and Harpers Ferry, Virginia. Convicted of murder and Treason for his raid on military facilities at Harpers Ferry, Brown was hanged for his crimes. Nevertheless, he galvanized the abolitionist cause, becoming a martyr in the fight against Slavery.

Brown was born in Torrington, Connecticut, on May 9, 1800, to Owen and Ruth Brown. His father, a strict Calvinist, despised slavery. When Brown was five years old, the family moved to Hudson, Ohio, a locale that was steeped in anti-slavery sentiment. Brown's fervor for the anti-slavery movement never waned and grew more vehement as he got older.

In 1820, Brown married Dianthe Lusk and six years later, they moved to Pennsylvania where he started a tannery. Lusk died in 1832, leaving Brown with five children. In 1833, he married 16-year-old Mary Ann Day who bore him seven more children. Brown and his growing family moved around the country while he tried his hand at a number of occupations, including tanner, farmer, cattle broker, and wool merchant.

In 1835, Brown's attempts to support his family and to repay money he had borrowed led to a disastrous "get rich quick" scheme. He convinced family members and friends to loan him money that he used to buy property where a canal was to be built. His timing proved unfortunate. In the wake of the Panic of 1837, plans for the proposed canal were changed and the properties bought up by Brown and his associates were rendered nearly worthless. Brown made numerous other attempts to reach financial solvency, but ultimately was forced to declare Bankruptcy in 1842.

Throughout his life Brown remained committed to the anti-slavery cause. Brown met the great abolitionist leader Frederick Douglass in 1847 and impressed Douglass with his sympathy for African Americans—both slaves and freemen. In 1849, Brown moved his family to the black community of North Elba, New York. Brown proposed to show the residents of North Elba how to farm and to act as a mentor to them. Brown was a participant in the Underground Railroad, an informal network of exslaves and sympathetic whites that helped slaves escape their masters and travel north to freedom. In 1851, he proposed the establishment of the League of Gileadites, an organization that would be used to protect escaped slaves.

In 1854, Congress passed the Kansas-Nebraska Act, which called for the residents of the new territories to decide the issue of slavery by popular vote. The area became known as "bloody Kansas" as competing groups fought violent skirmishes aimed at securing the territories for their side. Many pro-slavery residents of Missouri moved across the border in hopes of securing a victory at the election.

"I believe to have interfered as I have done … in behalf of His despised poor, was not wrong, but right. Now, if it be deemed necessary that I should forfeit my life for the furtherance of the ends of justice … I submit: so let it be done"
—John Brown

Five of Brown's sons had moved to Kansas and they entreated their father to join them. In 1855, Brown moved to Kansas and began to plan for the armed conflict he felt was inevitable. In 1856, in response to escalating incidents including the sacking of the anti-slavery town of Lawrence, Kansas, and the near-fatal beating of U.S. Senator Charles Sumner who was attacked on the Senate floor by a pro-slavery congressman, Brown led a small band of men to Pottawatomie Creek, Kansas, where they killed five pro-slavery settlers. This violent action by Brown was hailed by a number of anti-slavery groups and universally reviled by pro-slavery forces.In December 1858, Brown and a small group of followers staged a raid on two pro-slavery homesteads in Missouri where they succeeded in confiscating property and freeing 11 slaves. Brown and his group then traveled more than a thousand miles to deliver the former slaves to a boat that would carry them to freedom in Canada.

Although many abolitionists were opposed to violence, others had begun to adopt Brown's view that armed conflict was necessary in order to achieve the Abolition of slavery. Between 1857 and 1859, Brown crisscrossed New England, giving rousing speeches to anti-slavery groups and raising money for the abolitionist cause. Among those who gave money were the Secret Six, a group of wealthy benefactors from Boston who helped Brown by funding the army he sought to lead in order to further conduct his war against slavery.

On October 16, 1859, the 59-year-old Brown led his Provisional Army, consisting of five black men and 21 whites (three of them his sons) in a nighttime raid on the town of Harpers Ferry, Virginia. Brown and his men cut telephone wires, took several hostages and gained control of the federal armory and arsenal. Brown's plan was to arm slaves with weapons from the arsenal, thus enabling them to fight for their freedom. However, he and his group found themselves pinned down by a group of local citizens and nearby militia groups who killed a number of his men including two of his sons.

On the morning of October 18, a contingent of U.S. marines led by Colonel Robert E. Lee joined the battle. Brown refused a chance to surrender and 36 hours after the raid had started, Brown and his remaining companions were captured. Brown was taken to Charles Town, Virginia, (now West Virginia) to be tried. In a trial that lasted for nearly a month, Brown was charged with murder, conspiracy, and treason against the state. He was found guilty of all three charges. Before hearing his sentence, Brown gave a brief but passionate statement to the court:

… I believe to have interfered as I have done … in behalf of His despised poor, was not wrong, but right. Now, if it be deemed necessary that I should forfeit my life to the furtherance of the ends of justice, and mingle my blood further with the blood of my children, and with the blood of millions in this slave country whose rights are disregarded by wicked, cruel, and unjust enactments, I submit: so let it be done.

Brown was hanged in Charles Town on December 2, 1859. On the day of his execution, guns were fired and bells tolled in many northern cities. Brown was hailed as a martyr of the abolitionist movement, which concluded that a peaceful solution could not be found. In April 1861, Confederate forces fired on Fort Sumter, an action that marked the beginning of the Civil War. In 1865, Congress passed the Thirteenth Amendment, which abolished slavery throughout the United States.

Feedback
Flashcards & Bookmarks ?
Please log in or register to use Flashcards and Bookmarks. You can also log in with
Flashcards ?
My bookmarks ?
+ Add current page to bookmarks
Mentioned in ?
References in periodicals archive ?
Calum Rattray with the rare picture and, inset, a familiar image of John Brown with Queen Victoria at Balmoral
Photo may put focus on Royal servant
John Brown enlisted on December 15, 1953, in Liverpool and served with 131 Airborne Engineer Regiment.
after 60 years Local hero honoured; Family of Sapper John Brown killed in Cyprus receive Elizabeth Cross in his honour
That's why I am speaking up today - because no matter what, mud sticks and I want to feel clean again." John Brown's life changed for ever over a discussion about his sister Dana's ownership and copyright of her performance of The Rosary.
I foolishly thought when the not guilty verdicts were read out in court it was all over.. but life is not normal any more & I don't think it ever will be; DANA'S BROTHER SPEAKS OUT ON CHILD SEX ABUSE CLAIMS; EXCLUSIVE
John Brown will become the new chief executive officer of PendaForm and David Kruger will become the new president of PendaForm.
Trienda Holdings Acquires US Thermoforming Specialist The PendaForm Co
The depiction of John Brown and his followers killing slave owners in 1856 is quite jarring, presented, without any indication of who Brown is, in between scenes of Thoreau walking in the woods.
Dan, A., and Maximilien Le Roy. Thoreau: A Sublime Life
"John Brown is exactly the person who should be writing The Definitive Guide on exit planning.
Best-Selling Exit Planning Author Releases New Book for Business Owners
"YOU CAN WEIGH JOHN BROWN'S BODY WELL ENOUGH, But how and in what balance weigh John Brown?" poet Stephen Vincent Benet wrote in 1928.
John Brown's soul
SILVER BULLET John Brown reckons Celtic are hitting out because they are failing to make the most of Rangers' years in the lower leagues by winning more trebles like Ibrox legends Jock Shaw, top left, Bobby Shearer, top right, Jock Wallace and John Greig, above left, Derek Johnstone and Colin Jackson, above right, Lorenzo Amoruso, main pic, and Tony Vidmar, Amoruso and Giovanni van Bronckhorst, below.
JOHN BROWN is sure to have upset IS BOMBER JUST TRYING TO CAUSE A BIT OF TREBLE?
Walden, Civil Disobedience, Life Without Principle, Slavery in Massachusetts, and A Plea for Captain John Brown are included in their entirety.
Citizen Thoreau: Walden, Civil Disobedience, Life Without Principle, Slavery in Massachusetts, A Plea for Captain John Brown
The photos have been sent to us by John Brown, pictured right, who now lives in Spain.
School football team went unbeaten for three years
John Brown wrote about slavery in his final note "I John Brown am now quite certain that the crimes of this guilty land will never be purged away, but with Blood.
Missouri's Legacy of Violent Racism
RANGERS HERO: John Brown set for an interview at Linfield
BROWN EYEING JEFFREY'S JOB; Bomber eyes Linfield role