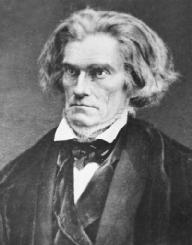 Calhoun was born March 18, 1782, in Abbeville County, South Carolina. After graduating from Yale University in 1804 and litch-field law school in 1806, Calhoun was admitted to the South Carolina bar in 1807 and established a successful legal practice there.

In 1808, Calhoun entered politics, beginning as a member of the South Carolina legislature. Three years later, he began his career in federal government, representing South Carolina in the House of Representatives until 1817. During his tenure, he performed the duties of acting chairman of the Committee on Foreign Affairs and in 1811 was a member of the War Hawks, a group that advocated war with England in 1812.

Calhoun resigned from the House in 1817 and assumed the duties of secretary of war for the next eight years. In 1825, he began his first term as vice president of the United States, serving under President John Quincy Adams for four years. He remained in this office during the presidency of Andrew Jackson, but relinquished his post in 1832 after a disagreement with Jackson concerning states' rights. The dispute between Jackson and Calhoun resulted in the Nullification Controversy of 1832 and 1833. Calhoun was a proponent of the right of a state to declare a federal law null and void if the state deemed such a law unconstitutional. His attitude was a result of the passage of protective tariffs that Calhoun believed favored the interests of the North over those of the South. Calhoun expressed his beliefs in his work, South Carolina Exposition, in which he discussed his views of sovereignty of the states. He believed that a state had the right to secede from the Union in order to keep the powers of the federal government in check. The Nullification Controversy finally ended with a compromise, and Calhoun emerged as the foremost speaker for the South during that era.

"The right of suffrage is the indispensable and primary principle in the foundation of a constitutional government."
—John Calhoun

Calhoun represented South Carolina in the U.S. Senate from 1832 to 1843, and again from 1845 to 1850. He continued his campaign for states' rights, supported Slavery, and introduced a policy of "concurrent majorities," wherein every area of the United States would participate equally in the exercise of federal power. During the period between his two senatorial terms, Calhoun served as U.S. Secretary of State from 1843 to 1845. Calhoun died March 31, 1850, in Washington, D.C.

As an author, Calhoun wrote many publications, including Disquisition on Government and Discourse on the Constitution and Government of the United States. A compilation of his works from 1851 to 1855 was published posthumously by R. K. Crallé in a six-volume set.