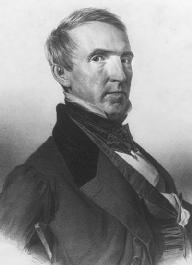 John Jordan Crittenden served as attorney general of the United States in 1841 under President william h. harrison, and again in 1850 under President Millard Fillmore. He is also known for his efforts to keep Kentucky in the Union during the Civil War.

Crittenden was born September 10, 1787, near Versailles, Woodford County, Kentucky. His father was a Revolutionary War soldier and an early Kentucky settler. Crittenden was schooled near his home in Jessamine County, Kentucky. He showed a great aptitude for learning and was encouraged to pursue a career in the law. He attended William and Mary College, and graduated in 1807. His first law practice was established in Logan County, Kentucky.

After two years as a struggling country lawyer, Crittenden was appointed attorney general for the Illinois Territory by Governor Vinian Edwards, of Kentucky, in 1809. His first experience as a public servant was cut short by the War of 1812. Crittenden returned to Kentucky and enlisted as a volunteer; he served for three years and experienced firsthand the tragedy of war.

"I hope to find my country in the right; however, i will stand by her, right or wrong."
—John J. Crittenden

In 1816 Crittenden was elected to a term in the Kentucky state legislature. The following year, he was elected to a seat in the U.S. Senate, but he did not complete the term. Finding local politics more to his liking, he resigned in 1819 and returned to Frankfort, Kentucky, to reclaim his old seat in the statehouse.Though he had little affection for national politics, Crittenden did support fellow Kentuckian Henry Clay in his unsuccessful 1824 bid for the presidency. Crittenden respected Clay's views on a number of issues, and they became political allies and lifelong friends. It was because of his association with Clay that Crittenden lost his next job. In 1827 Crittenden was appointed U.S. district attorney for Kentucky by President John Quincy Adams. He held the post until 1829, when he was removed by President Andrew Jackson—after Crittenden and Clay had voiced their opposition to the financial policies of the Jackson administration.

In 1835 Crittenden decided to give politics another chance. Again, he sought and won a seat in the U.S. Senate. Crittenden was beginning his second Senate term when he was offered the position of attorney general by President Harrison. He accepted.

Crittenden had been an ardent Harrison supporter and had campaigned for him in 1840. When Harrison died of pneumonia shortly after his inauguration and was succeeded by Vice President John Tyler, Crittenden was unable to support the new president. Along with other Whigs in the cabinet, Crittenden resigned in September 1841. In 1842 Crittenden found himself back in the U.S. Senate, appointed to fill the seat left vacant by the retirement of Clay. He finished Clay's term and was subsequently reelected in his own right.

Throughout his five separate terms in the Senate, Crittenden was affiliated with the Whigs. With the Whig Party, he opposed the annexation of Texas, discouraged animosity toward Great Britain over the Oregon boundary, and refused to give enthusiastic support to the Mexican War. In 1848 while still a U.S. senator, Crittenden was elected governor of Kentucky; he resigned his Senate seat to accept the job. His return to Kentucky brought renewed contact with Clay, who was again running for the presidency. Crittenden, convinced that Clay was not a viable candidate, threw his support to Zachary Taylor, and caused a permanent rift between himself and Clay.

Following the death of President Taylor and the succession of Vice President Fillmore, Crittenden was offered his old cabinet post as attorney general. He again accepted, and through this office he authored an opinion upholding the constitutionality of fugitive slave laws. Though many of Crittenden's writings were controversial, he agreed with the view that attorney general opinions were only advisory and could be ignored by the president.

In 1855 Crittenden was elected to another term in the U.S. Senate. There, he vigorously opposed the Kansas-Nebraska Act of 1854. When the issue led to the breakup of the Whig party, he joined the Know-Nothing Party in 1856. Two years later, he joined the Constitutional Union party, and campaigned on behalf of John Bell and Edward Everett in the 1860 presidential election that brought Abraham Lincoln to the White House.

Although Crittenden did not agree with Lincoln on all matters of policy, he did oppose secession of the Southern states and he did support Lincoln's efforts to preserve the Union. As a prominent political figure in both the North and the South, Crittenden worked hard to effect a compromise that would avert a civil war.

In December 1860, he proposed an amendment to the Constitution that has come to be known as the Crittenden Resolution. To bring the Union together, he suggested that the Missouri Compromise line be restored and continued to California, that Slavery be guaranteed indefinitely in the District of Columbia, and that slaveholders be reimbursed for runaway slaves.

Crittenden's compromise effort was defeated by Lincoln's strong stand against any extension of slavery into the territories, and by opposition from strong Republican leaders in Congress. Nevertheless, Crittenden stood with the government and continued to support Lincoln's position that it was the right and duty of the government to maintain the Union.

Returning to Kentucky in early 1861, Crittenden traveled the state urging citizens to support the Union cause and to remain neutral in the escalating conflict. On May 27, 1861, he acted as chairman of the Frankfort Convention and successfully argued against leaders who encouraged Kentucky to join the Southern secessionists. For his efforts, Crittenden was returned to Congress, but this time to the U.S. House of Representatives.

As a representative, he opposed the confiscation acts, the Emancipation Proclamation, the military regime in Kentucky, the employment of slaves as soldiers, and the war in general. On July 19, 1861, he offered a resolution that was adopted with only two dissenting votes:

Resolved by the house of representatives of the Congress of the United States, That the present deplorable civil war has been forced upon the country by the disunionists of the southern states, now in arms against the constitutional government, and in arms around the capital; that in this national emergency congress, banishing all feelings of mere passion or resentment, will recollect its only duty to the whole country; this war is not waged on their part in any spirit of oppression, or for any purpose of conquest or subjugation, or purpose of overthrowing or interfering with the rights of established institutions of those states, but to defend and maintain the supremacy of the constitution, and to preserve the Union with all the dignity, equality, and rights of the several states unimpaired; and that as soon as these objects are accomplished the war ought to cease.

By 1863 Crittenden had held political office for almost forty-five years. He had served two presidents as attorney general, completed five terms as a U.S. senator, and finished a single term as a U.S. representative. He was preparing to run for another term in the House when he died. He was remembered at his funeral as a man with fine personal qualities, a gift for public speaking, and a firm commitment to the Union.

Crittenden's efforts to preserve the Union were personal as well as political: two of his sons were on opposite sides of the issues and the battle lines. His youngest son, Thomas L. Crittenden, was a commissioned officer in the Union army; another son, George Bibb Crittenden, held similar rank in the army of the Confederacy.