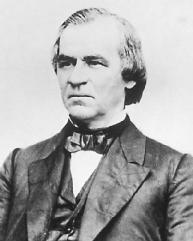 Andrew Johnson ascended to the U.S. presidency after the assassination of Abraham Lincoln. He was the seventeenth president and the first to undergo an Impeachment trial.

Johnson was born December 29, 1808, in Raleigh, North Carolina. Little is known of his early life. His ancestry is usually traced only to the family of his father, Jacob Johnson, who raised his family in Raleigh and served as the city's constable and sexton, was a porter to the state bank, and was a respected captain in the militia of North Carolina. He was viewed as a hero after saving two men from drowning in a pond outside Raleigh. He died of health complications only a year later, leaving the Johnson family in poverty.

From the age of ten to the age of 17, Johnson worked as an apprentice to a Raleigh tailor, J. J. Selby. Shortly after, he settled in Greeneville, Tennessee, where he opened his own tailor shop. Before he reached the age of 19, he had met Eliza McCardle, a respected teacher in Greeneville, whom he married on May 17, 1827.

Johnson's wife encouraged his aspirations to become politically active, and Johnson turned his tailor shop into a center for men throughout Greeneville to debate and practice their oratory. In 1828 Johnson was overwhelmingly elected city alderman. Two years later his supporters elected him mayor. From 1835 to 1843, he served in the Tennessee legislature. For the next ten years, he served in the U.S. House of Representatives. He returned to Tennessee in 1853 and was elected governor of the state. When his term expired in 1857, he became a member of the U.S. Senate, where he served until 1862. He was the only southern senator who refused to resign during the Civil War.

Johnson attracted the attention of President Lincoln. In 1862 Lincoln appointed the Tennessee congressman to serve as military governor of the state. After Johnson effectively managed the state throughout the Civil War, Lincoln selected him to run for vice president in the 1864 election. The pro-Union ticket of Lincoln and Johnson was victorious.

Lincoln was assassinated on April 14, 1865, and Johnson assumed the duties of president on April 15. He had been left with the daunting task of assimilating the former confederacy of southern states into the United States. Johnson sought to overlook the secession of the South. He granted many pardons and allowed southern politicians to restore oppressive practices toward former slaves, such as forcing them to give land back to their old masters and depriving them of the right to vote. A group of congressional Republicans, led by Thaddeus Stevens, a representative from Pennsylvania, opposed Johnson's practices. Against Johnson's wishes, the South was put under military rule. The civil rights act of 1866, passed in spite of Johnson's Veto, granted blacks the right to vote.

In 1867 Congress passed the Tenure of Office Act (14 Stat. 430), also over Johnson's veto. This act declared that the president could not, without the Senate's permission, remove from federal office any official whose appointment had been approved by the Senate. In August 1867, Johnson refused to follow the Tenure Act when he requested the removal of Secretary of War edwin m. stanton. He did so on the ground that Stanton had conspired with radical Republicans against the president.

In removing Stanton from his position, Johnson aroused the wrath of even moderate Republicans in Congress. On February 24, 1868, the House passed resolutions to impeach Johnson for High Crimes and Misdemeanors. By early March, the House had drawn up 12 Articles of Impeachment against Johnson. Eight of these concerned his alleged violations of the Tenure of Office Act. The ninth alleged a lesser charge, that he had overstepped his boundaries in suborning a U.S. general. The tenth and eleventh articles accused Johnson of defaming Congress in public speeches. A twelfth and final article, dubbed the omnibus article, was intended to induce senators who might have qualms about specific charges against Johnson to find him guilty on general grounds.

Under the Constitution at least two-thirds of the Senate must vote to impeach the president. In Johnson's case this meant that 36 senators would have to vote for impeachment. The defense knew that vote would have to come from the Senate's 42 Republican members—the Senate's 10 Democrats and 2 Johnsonites were bound to support his acquittal. Johnson's lawyers were confident that if they could appeal to the senses of moderate Republicans—whom the defense presumed were loyal to the restoration of the Union—the impeachment effort would fail.

On May 16 and May 26, 1868, the Senate voted 35–19 against Johnson on three of the articles of impeachment. By only one vote less than the two-thirds majority necessary to remove him, Johnson was acquitted of the most serious charges. The Senate subsequently adjourned its court, and Johnson was allowed to finish his term. His presidency ended in 1869, and he returned to Tennessee.

Most scholars and historians have concluded that the impeachment charges against Andrew Johnson were motivated by partisan politics and that removing Johnson on any one of the charges would have set a dangerous precedent. In effect Congressional Republicans were trying to use impeachment as a political tool to overcome Johnson's repeated attempts to impede their legislative efforts. However, the Founding Fathers, by devising a constitutional system of checks and balances in which the three co-equal branches of government are each delegated certain specific, enumerated authority, tried to prevent any one branch from acquiring too much power and wielding it in a despotic fashion. Had Congress been successful in removing Johnson, impeachment might have become a favored political weapon against future U.S. presidents, thereby severely weakening the presidency and removing any incentive for the House and Senate to cooperate and compromise with the Executive Branch.

"Amendments to the Constitution ought not be too frequently made; … [if] continually tinkered with it would lose all its prestige and dignity, and the old instrument would be lost sight of altogether in a short time."
—Andrew Johnson

Many scholars and historians have also concluded that the Johnson impeachment proceedings helped narrow the class of impeachable offenses. The U.S. Constitution provides that the "President … of the United States, shall be removed from Office on Impeachment for … high Crimes and Misdemeanors," but fails to define what those terms mean. U.S. Const. art. II § 4. The Johnson impeachment proceedings, in the minds of many observers, have come to stand for the proposition that before an offense may be deemed an impeachable offense it must not only constitute a crime but the crime itself must be of a serious or grave nature. However, this precedent only advanced the discussion so far, as it failed to determine how serious or grave the criminal activity must be for it to be considered an impeachable offense, a question that recurred throughout the impeachment proceedings against William Jefferson Clinton, who was acquitted by the Senate on charges that he committed the crimes of perjury and Obstruction of Justice to conceal his relationship with former White-House intern Monica Lewinsky.