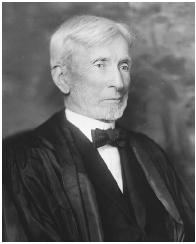 Joseph McKenna rose from humble immigrant roots as a baker's son to a position of prominence in California Republican politics. McKenna served as county district attorney (1866–1870), U.S. Congressman, justice of the Ninth U.S. Circuit court (1892–1897), and, briefly, U.S. attorney general (1897). His controversial nomination to the Supreme Court in 1897 led to a twenty-seven-year tenure.

McKenna was born in Philadelphia on August 10, 1843, to Irish immigrant parents. He became head of the family at age fifteen when his father died shortly after moving the eight-member household to California. By age twenty-two, and while working several jobs, McKenna had studied enough law on his own to pass the California bar. One year later, despite little experience, he was elected district attorney for Solano County. He owed his rapid success to help from railroad baron leland stanford, the state's governor. In time, his loyalty to Stanford earned him three straight Republican nominations for Congress. He finally won in 1885. In Washington, D.C., McKenna opposed business regulations, supported federal land grants to the railroads, and sponsored legislation that would have made Chinese immigrants carry identification cards.

In 1892, on the urging of Stanford, who had become a U.S. senator, President benjamin harrison appointed McKenna to the Ninth Circuit Court of Appeals. Opponents protested that McKenna was unqualified and, moreover, beholden to railroad interests, but the nomination succeeded. He held the seat for four years, largely without incident or note; yet occasionally he proved his critics right about his allegiances. In Southern Pacific Co. v. Board of Railroad Commissioners, 78 F. 236 (C.C.N.D. Cal. 1896), for example, he blocked the California legislature's attempt to set railroad fares, arguing that the proposed rates were unfair to the railroads.

While serving on the Ways and Means Committee in Congress, McKenna had befriended fellow Republican William McKinley. McKinley became president in 1896 and in 1897 made McKenna U.S. attorney general. Only a few months later, McKinley nominated McKenna to fill a vacancy on the U.S. Supreme Court created by the departure of Justice stephen field. Again, there was opposition, with newspapers and lawmakers calling him unfit for the responsibility. However, the nomination succeeded.

Of McKenna's 633 opinions, only a handful were majority opinions. These came in important cases, however, such as Hipolite Egg Co. v. United States, 220 U.S. 45, 31 S. Ct. 364, 55 L. Ed. 364 (1911), one of the decisions during the era that upheld federal Police Power under the Constitution's Commerce Clause. Generally regarded as a hard-working justice, his body of opinions shows that he developed a pragmatism and clarity of expression in his twenty-seven years on the bench. Slowed by age, he resigned in 1925 under the advice of Chief Justice William Howard Taft. He died several months later on November 21, 1926, in Washington, D.C.

Feedback
Flashcards & Bookmarks ?
Please log in or register to use Flashcards and Bookmarks. You can also log in with
Flashcards ?
My bookmarks ?
+ Add current page to bookmarks
Mentioned in ?
References in periodicals archive ?
|Our thanks to The History Press for allowing us to reproduce images taken from Joseph McKenna's Images of England: Central Birmingham Pubs.
Bloody murder as Royalists ran amok in Brum; SECRETS OF HISTORIC RED LION PUB REVEALED
"We wanted to protect the identity of the candidates," says orchestra president and CEO Joseph McKenna of the search's confidential approach.
Behind the music: at the Sarasota Orchestra, Maestro Society members get up close and personal with the concert experience
Joseph McKenna, Lewis McLaughlin and James Copeland also all crossed, while Copeland put in a solid defensive display, snatching seven tags - including five in a row.
NEWS FROM AROUND THE CLUBS; email: robgriffiths@dailypost.co.uk
Starring: Christopher Walken, Joseph McKenna, Morgan Freeman, Wynn Everett Three museum security guards devise a plan to steal back the artworks to which they have become attached after they are transferred to another museum.
Films on TV
With Stevens' dismissal, Gateshead were always going to be up against it and Miller (2), Law, Dawes (2), Ryan McDonald, Marc Bainbridge and Joseph McKenna all cashed in with tries.
Thunder rimbled in heavy defeat
Naehring Max yon Sydow Dolores Michelle Williams Rachel 1 Emily Mortimer Rachel 2 Patricia Clarkson George Noyce Jackie Earle Haley Warden Ted Levine Deputy Warden McPherson John Carroll Lynch Laeddis Elias Koteas With: Robin Bartlett, Christopher Denham, Nellie Sciutto, Joe Sikora, Curtiss I' Cook, Ray Anthony Thomas, Joseph McKenna, Ruby Jerins.
Pulp powerhouse
Joseph McKenna is one of the young South Dublin recruits at the centre of an Army investigation into neo-Nazi activities ordered by Defence Minister Willie O'Dea.
NEO-NAZI LATEST: I AM A JEW; Army probe man denies anti-Semitism
In related news, Joseph McKenna has been appointed southeast regional sales manager by Acme-Hardesty.
Acme-Hardesty Co
Fuller Chief justice 1888-1910 Joseph McKenna Associate justice 1898-1925 Edward D.
The States' champion: Sandra Day O'Connor was an eloquent defender of the states' role in our federal system
Joseph McKenna was so incompetent at the end of his term that, in the words of his colleague William Howard Taft, he once "wrote an opinion deciding the case one way when there had been a unanimous vote the other, including his own." Taft stayed on the job a little too long himself: In 1930 Louis Brandeis wrote to Felix Frankfurter that their colleague "had really lost his grip."
Supreme Court senility: historian David J. Garrow discusses decrepit judges
The full list is: John Heanneau, Mark Duncan, Linus Roache and Christopher Dormerr who played Peter as a boy; Scots actor Joseph McKenna, who played the teenage Peter in 1977; David Lonsdale (198688) and mostly recently Chris Gascoyne who left the show earlier this month after three years.
Mail box: Just Ask
(Front from left) Sam Hobday, Mitchell Palmer and Lewis Hancock.; Pictured holding the cup is Matthew Griffin, with Sean O'Brien (left) and Ryan Stewart, flanked (from left) by John Ormsby, Francis McGinty, Sean Brennan, Luke Coen, George Teggin, Niall Buswell, Joseph McKenna, Gregory Binns and Ryan Haraburda.
CELEBRATIONS: Celebrating... your sporting successes