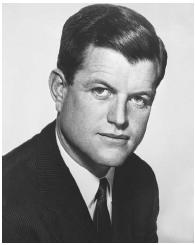 Ted Kennedy has served as a U.S. senator from Massachusetts since 1962. The brother of President john f. kennedy and Senator robert f. kennedy, who were both assassinated, he has championed many liberal social programs, including National Health Care, and has been a major figure in the Democratic Party. His presidential aspirations were damaged because of personal scandal.

Edward Moore "Ted" Kennedy, the youngest of nine children of Joseph P. Kennedy and Rose Fitzgerald Kennedy, was born February 22, 1932, in Brookline, Massachusetts. He started at Harvard University in 1950, then left in 1951 to serve in the U.S. Army. He returned to college in 1953 and graduated in 1956. He next attended the University of Virginia Law School, where he graduated in 1959. He married Virginia Joan Bennett in 1958. The couple had three children, Kara A., Edward M., Jr., and Patrick J. They were divorced in 1983.

In 1960, Kennedy became an assistant district attorney in Suffolk County, Massachusetts. He soon turned his eye toward politics. After his brother John was elected president in 1960 and had to resign from the U.S. Senate, Kennedy filed in the 1962 election to fill out John's term. His announcement led opponents to criticize him for trading on the Kennedy name. He was only 30 years old, the minimum age for a U.S. senator set by the U.S. Constitution, and had little experience in politics or the workplace. Nevertheless, Kennedy easily won the election. He won a full six-year term in 1964 and has been reelected five times since then.

Despite his youth, Kennedy soon emerged as a forceful advocate of social-welfare legislation and a respected member of the Senate. He was elected Senate majority whip in 1969, which was highly unusual for a person with little seniority. Kennedy appeared ready to make a presidential bid in 1972. But any hopes in that direction were dashed in the summer of 1969, when his personal conduct became a national scandal.

"America was an idea shaped in the turbulence of revolution, then given formal structure in a constitution."
—Ted Kennedy

On July 18, 1969, Kennedy attended a party with friends and staff members on Chappaquiddick Island, Massachusetts. That evening, Kennedy drove his car off a narrow bridge on the island. Mary Jo Kopechne, a passenger in the car and former member of his brother Robert's staff, drowned. Kennedy's actions following the accident were disturbing. He did not immediately report what had happened, and he remained in seclusion for days. He pleaded guilty to the misdemeanor charge of leaving the scene of an accident. This plea, coupled with the revelation that he, a married man, had been in the company of a young, unmarried woman, devastated Kennedy's image and political standing. He lost his majority whip position in 1971 and refused to become involved in the 1972 presidential race.During the 1970s, Kennedy concentrated his energies on his senatorial duties. He became the leading advocate of a national health care system that would provide coverage to every citizen without regard to income. He also argued for tax reform, arms control, and stronger antitrust laws. From 1979 to 1981, he chaired the Senate Judiciary Committee. He initially supported the administration of Democratic president jimmy carter, but soon criticized Carter's economic policies and leadership style.

His dissatisfaction led him to seek the presidential nomination in 1980. Running against an incumbent of his own party, Kennedy drew the support of liberals and won primaries in ten states. Carter nevertheless won the nomination. However, already weakened by Kennedy's criticisms, Carter lost the general election to ronald reagan.

During the administrations of Reagan and his successor, george h.w. bush, Kennedy became the leading liberal critic of Republican policies and politics.

Kennedy's personal life continued to attract attention in the 1990s. In March 1991, Kennedy's nephew, William Kennedy Smith, was charged with rape in Palm Beach, Florida. The alleged assault took place at the Kennedy family compound. Palm Beach police asserted that Kennedy had obstructed justice by misleading police early in their investigation. When police arrived to investigate, they were told that Kennedy and Smith had already left the area. Later investigation of travel records indicated that Kennedy probably was still in the mansion at the time. Although Smith was acquitted of the charge in December 1991, the nationally televised trial again tarnished Kennedy's reputation. In July 1992, Kennedy married Victoria Reggie, a Washington, D.C., lawyer.

Kennedy has not abandoned his liberal beliefs and has remained a powerful member of the U.S. Senate. In 1996, he sponsored legislation with Republican Senator Nancy Kassebaum of Kansas that makes Health Insurance portable, so that families do not lose their health insurance coverage if they lose or change jobs. In 1999, Kennedy and his family suffered a further tragic loss when a small airplane piloted by his nephew John Kennedy, Jr. went down in the Atlantic Ocean near Martha's Vineyard, Massachusetts, killing John Kennedy, his wife, and his sister-in-law. Once again, Ted Kennedy found himself playing the role of family patriarch as he oversaw funeral arrangements and consoled family members. In the new millennium, Kennedy has continued his role as senior senator, serving as ranking member on the Health, Education, Labor and Pensions Committee. He is the senior Democrat on the Immigration Subcommittee of the Judiciary Committee and is a member of the Senate Arms Control Observer Group that is part of the Armed Services Committee.

Kennedy's persistence, collegiality, and long service have won him friends on both sides of the aisle. He continues to advocate for numerous causes including raising the Minimum Wage, strengthening Civil Rights laws and laws aimed at protecting Senior Citizens and persons with disabilities, and tightening environmental and worker-safety laws.