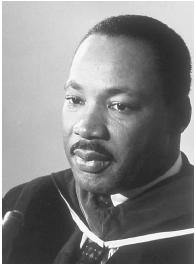 For thirteen turbulent years, Martin Luther King Jr. was the inspirational leader and moral arbiter of the U.S. Civil Rights Movement. An advocate of nonviolence, King helped organize well-publicized boycotts, marches, and demonstrations to protest Segregation and racial injustice. From 1955 to 1968, he was the impassioned voice of African Americans who sought the abolishment of Jim Crow Laws (a series of regulations enacted to keep the races separate) and the guarantee of equal housing, education, voting rights, and employment. Although countless U.S. citizens contributed to the success of the civil rights movement, King is its most enduring symbol. Before his mission was cut short by an assassin's bullet in 1968, he succeeded in permanently raising the social, economic, and political status of all people of color.

King was born January 15, 1929, in Atlanta, Georgia. At an early age, he demonstrated the intellect and drive that would propel him to national prominence. After skipping his senior year of high school, he enrolled in Atlanta's Morehouse College, at the age of fifteen. He earned a degree in sociology from Morehouse in 1948. Since both his father and grandfather were Baptist preachers, it was not surprising when King entered Crozer Theological Seminary, in suburban Philadelphia, at age nineteen. After graduating from Crozer as class valedictorian, King enrolled in Boston University's renowned School of Theology, where he earned a doctor's degree in 1955. While in Boston, he met and married Coretta Scott, a student at the Boston Conservatory. The young couple moved to Montgomery, Alabama, in 1954, after King accepted a position as minister of the Dexter Avenue Baptist Church. He was only twenty-six years old and had lived in Montgomery for just eighteen months when an African–American bus rider changed the course of his life forever.

On December 1, 1955, seamstress rosa parks took a personal stand against the South's Jim Crow laws when she refused to give up her seat to a white person and move to the back of a city bus. In Montgomery, segregated seating on buses was mandated by ordinance. Parks's defiant act galvanized the city's African–American community. A bus boycott was organized to support Parks after her arrest and to put an end to segregated public transportation. When the Montgomery Improvement Association was created to direct the protest, a somewhat surprised King was named president. Years later, those involved in the boycott explained that King was selected because of his powerful speaking style, his credibility as a clergyman, and his relatively low profile in Montgomery. Because King was a newcomer, he had not made any enemies within the African American community and had not been corrupted by dishonest white politicians.

With leadership thrust upon him, King took over the boycott. He rose to the challenge, creating peaceful strategies that placed the bus company in an economic squeeze and African Americans on the moral high ground. He was greatly influenced by Mohandas K. ("Mahatma") Gandhi's nonviolence movement in India. King denounced violence throughout the citywide boycott, only to encounter death threats, hate mail, physical attacks, mass arrests, and the bombing of his church and home. The possibility of death was constant, but King used his deep religious faith and inner strength to stare down fear. He told his followers, "Love your enemies; bless them that curse you…. Remember, if I am stopped, this Movement will not stop, because God is with this Movement."

By November 1956, the boycott had taken the intended financial toll on the transit company. Seventy percent of Montgomery's bus riders were African Americans, and they supported the boycott in droves. The campaign was declared a success when the buses were at last desegregated in December 1956 and Montgomery's ordinance was declared unconstitutional by the U.S. Supreme Court (Owen v. Browder, 352 U.S. 903, 77 S. Ct. 145, 1 L. Ed. 2d 114 [1956]). More important, King and his fellow African Americans discovered the power of social protest and the virtue of nonviolence.

After Montgomery, King knew that his true calling was social activism. In 1957, he helped found the Southern Christian Leadership Conference, an organization that would guide the growing civil rights movement. During the late 1950s and early 1960s, King took part in dozens of demonstrations throughout the South and was arrested and jailed for his civil disobedience. The national media and the administrations of Presidents dwight d. eisenhower and john f. kennedy took notice. King became the torchbearer for the nation's civil rights struggle.

In 1963, King and his fellow activists set out to integrate Birmingham, Alabama, which King called "the most thoroughly segregated city in the country." Unlike Montgomery, where the issue was limited to bus ridership, Birmingham offered a forum for far-reaching objectives. King's goal was to desegregate the entire community—its restaurants, hotels, department stores, rest rooms, and public facilities. As the sit-ins and marches began, the response by some white southerners was ugly. Extremists bombed an African–American church, killing four young girls who were attending Sunday School inside. Police commissioner Eugene ("Bull") Connor ordered his officers to use high-pressure water hoses, police dogs, and clubs against the nonviolent demonstrators. Grade school and high school protesters were jailed alongside adults, and at one point, three thousand African Americans were incarcerated in Birmingham. King himself was jailed and as a result wrote his historic 1963 essay Letter from Birmingham City Jail, an eloquent justification of nonviolent resistance to unjust laws. Throughout the saga, television cameras sent searing images of white brutality across the nation. As King hoped, federal intervention was required to handle the situation, and segregation laws were forced off the books.

Perhaps the crowning moment of King's career was the 1963 March on Washington, when 250,000 people from diverse racial and ethnic backgrounds converged in front of the Lincoln Memorial in Washington, D.C. Here, King delivered his famous "I Have a Dream" speech, which described a world of racial equality and harmony. The speech ended with these stirring words:

When we let freedom ring, when we let it ring from every village and every hamlet, from every state and every city, we will be able to speed up that day when all of God's children, black men and white men, Jews and Gentiles, Protestants and Catholics, will be able at last to join hands and sing in the words of the old Negro spiritual, "Free at last! Free at last! Thank God Almighty, we are free at last!"

King was successful in pressuring the U.S. Congress and President lyndon b. johnson to support the Civil Rights Act of 1964 (42 U.S.C.A. § 2000a et seq.). The law guaranteed equal access for all U.S. citizens to public accommodations and facilities, employment, and education. In 1965, King's campaign in Selma, Alabama, helped ensure the passage of the Voting Rights Act of 1965 (42 U.S.C.A. § 1973 et seq.), which extended the vote to previously disenfranchised African Americans in the Deep South. The act outlawed the tests, standards, and procedures that were routinely used to disqualify voters on the basis of race.

King received several honors for his work, including the Nobel Peace Prize in 1964. The same year, he was the first African American to be named Time magazine's Man of the Year. Since 1986, the third Monday in January has been observed as a federal holiday in honor of King's birthday.

The last years of King's life were difficult, as he struggled with bouts of depression over personal and professional failures. His hold on the civil rights movement was clearly weakening. Young African–American activists were demanding a more militant approach to achieving social and economic justice. The angrier Black Power Movement appealed to increasing numbers of African Americans who were impatient with the slow pace of King's nonviolent tactics. King's campaigns in northern cities such as Chicago were largely unsuccessful.

On August 11, 1965, just days after the passage of the Voting Rights Act, the African American Watts area of Los Angeles erupted into a riot that lasted six days. Thirty-four people were killed, and $30 million worth of property was damaged. After the upheaval in Watts, King's message and influence were diminished.

In 1967, King publicly criticized the United States' involvement in Vietnam and earned the enmity of his former liberal ally President Johnson. Critics believed that King's entry into the peace movement diluted his efforts to achieve further gains for African Americans.

In the spring of 1968, King planned to participate in the Poor People's Campaign, in Washington, D.C. Before going to the nation's capital, he traveled to Memphis to support striking garbage workers there. On April 4, while standing on the balcony of his room at the Lorraine Motel, in Memphis, he was assassinated by James Earl Ray, a white man.

According to those who knew him, King did not set out to become a martyr for civil rights. As ella j. baker, a longtime activist, said, "The movement made Martin rather than Martin making the movement." King represents the dignity of the struggle and the sacrifice it required. Despite a tendency to deify King, he should be regarded not as a saint but as an extraordinary individual who used his prodigious talents to change society. When asked to describe his possible legacy, King himself said, "I just want to leave a committed life behind."