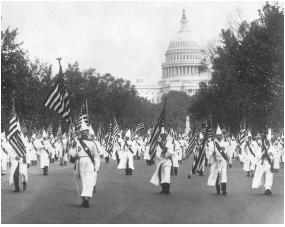 Ku Klux Klan members parade in Washington, D.C., during the 1920s, a decade in which Klan membership grew into the millions and the group exerted significant political influence.

The Ku Klux Klan (KKK) is a white supremacist organization that was founded in 1866. Throughout its notorious history, factions of the secret fraternal organization have used acts of terrorism—including murder, Lynching, Arson, rape, and bombing—to oppose the granting of Civil Rights to African Americans. Deriving its membership from native-born, white Protestant U.S. citizens, the KKK has also been anti-Semitic and anti-Catholic, and has opposed the immigration of all those it does not view as "racially pure."

Other names for the group have been White Brotherhood, Heroes of America, Constitutional Union Guards, and Invisible Empire.

Ex-Confederate soldiers established the Ku Klux Klan in Pulaski, Tennessee, in 1866. They developed the first two words of the group's name from the Greek word kuklos, meaning "group or band," and took the third as a variant of the word clan. Starting as a largely recreational group, the Klan soon turned to intimidating newly freed African Americans. Riding at night, the Klan terrorized and sometimes murdered those it opposed. Members adopted a hooded white costume—a guise intended to represent the ghosts of the Confederate dead—to avoid identification and to frighten victims during nighttime raids.

The Klan fed off the post-Civil War resentments of white southerners—resentment that centered on the Reconstruction programs imposed on the South by a Republican Congress. Under Reconstruction, the North sought to restructure southern society on the basis of racial equality. Under this new regime, leading southern whites were disfranchised, while inexperienced African Americans, carpetbaggers (northerners who had migrated to the South following the war), and scalawags (southerners who cooperated with the North) occupied major political offices.

Shortly after the KKK's formation, Nathan Bedford Forrest, a former slave trader and Confederate general, assumed control of the organization and turned it into a militaristic, hierarchical entity. In 1868, Forrest formally disbanded the group after he became appalled by its growing violence. However, the KKK continued to grow, and its atrocities worsened. Drawing the core of its membership from ex-Confederate soldiers, the KKK may have numbered several hundred thousand at its height during Reconstruction.

In 1871, the federal government took a series of steps to counter the KKK and its violence. Congress organized a joint select committee made up of seven senators and 14 representatives to look into the Klan and its activities. It then passed the civil rights act of 1871, frequently referred to as the Ku Klux Klan Act, which made night-riding a crime and empowered the president to order the use of federal troops to put down conspirators by force. The law also provided criminal and civil penalties for people convicted of private conspiracies—such as those perpetrated by the KKK—intended to deny others their civil rights.

Hugo L. Black and the KKK

Hugo L. Black is remembered as a distinguished U.S. Supreme Court justice, a progressive U.S. Senator, and an able trial attorney. Black also was a member of the Ku Klux Klan (KKK) in the 1920s. Public disclosure of this fact came shortly after his appointment to the Supreme Court was confirmed by the Senate in 1937. The resulting public uproar would probably have doomed his Court appointment if the disclosure had come just a few weeks earlier.

In 1923 Black was a trial attorney in Birmingham, Alabama, which at the time was controlled by members of the Klan. After rebuffing membership several times, he joined the KKK on September 23, 1923. Black later claimed to have left the group after several years, but no clear evidence documented his departure. In 1937 there were allegations he had signed an undated letter resigning from the Klan, which was to have been used to establish a false resignation date if public scandal occurred.

In 1937 Black made a radio address to the nation, in which he admitted his Klan membership but claimed he had resigned and had not had any connection with the group for many years. He also stated he harbored no prejudice against anyone because of their race, religion, or ethnicity.

During his Court career, Black was reluctant to discuss his KKK membership and offered various reasons for why he had joined. To some people he admitted it was a mistake, whereas to others he said the KKK was just another fraternal organization, like the Masons or Elks. It is clear, however, that as an ambitious politician, Black had sought Klan support for his political campaigns. In the 1920s KKK support had been critical to a Democratic politician in Alabama.

Despite his later denial of holding any prejudices, Black was an active member of the KKK for several years. He participated in Klan events throughout Alabama, wearing the organization's characteristic white robes and hood, and initiated new Klan members into the Invisible Empire, reading the Klan oath, which pledged the members to "most zealously and valiantly shield and preserve by any and all justifiable means … white supremacy."

Also in 1871, President ulysses s. grant relocated troops from the Indian wars on the western plains to South Carolina, in order to quell Klan violence. In October and November of that year, the federal Circuit Court for the District of South Carolina held a series of trials of KKK members suspected of having engaged in criminal conspiracies, but the trials resulted in few convictions.The Klan declined in influence as the 1870s wore on. Arrests, combined with the return of southern whites to political dominance in the South, diminished its activity and influence.

The KKK experienced a resurgence after World War I, reaching a peak of 3 or 4 million members in the 1920s. David W. Griffith's 1915 movie The Birth of a Nation, based on Thomas Dixon's 1905 novel The Clansman, served as the spark for this revival. The movie depicted the Klan as a heroic force defending the "Aryan birthright" of white southerners against African Americans and Radical Republicans seeking to build a Black Empire in the South. In particular, the movie showed a gallant Klan defending the honor of white women threatened by lecherous African American men.

William J. Simmons renewed the KKK at a Stone Mountain, Georgia, ceremony in 1915. Later, Christian fundamentalist ministers aided recruitment as the Klan portrayed itself as the protector of traditional values during the Jazz Age.

As its membership grew into the millions in the 1920s, the Klan exerted considerable political influence, helping to elect sympathetic candidates to state and national offices. The group was strong not only in southern states such as Georgia, Alabama, Louisiana, and Texas, but also in Oklahoma, California, Oregon, Colorado, Kansas, Missouri, Illinois, Indiana, Ohio, Pennsylvania, New Jersey, and New York. Strongly opposed to non–Anglo-Saxon immigration, the Klan helped secure the passage of strict quotas on immigration. In addition to being racist, the group also espoused hatred of Jews, Catholics, socialists, and unions.

By the end of the 1920s, a backlash against the KKK had developed. Reports of its violence turned public sentiment against the group, and its membership declined to about 40,000. At the same time, Louisiana, Michigan, and Oklahoma passed anti-mask laws intended to frustrate Klan activity. Most of these laws made it a misdemeanor to wear a mask that concealed the identity of the wearer, excluding masks worn for holiday costumes or other legitimate uses. South Carolina, Virginia, and Georgia later passed similar laws.

The KKK experienced another, less successful resurgence during the 1960s as African Americans won civil rights gains in the South. Opposed to the Civil Rights Movement and its attempt to end racial Segregation and discrimination, the Klan capitalized on the fears of whites, to grow to a membership of about 20,000. It portrayed the civil rights movement as a Communist, Jewish conspiracy, and it engaged in terrorist acts designed to frustrate and intimidate the movement's members. KKK adherents were responsible for acts such as the 1963 bombing of the Sixteenth Street Baptist Church in Birmingham, Alabama, in which four young African–American girls were killed and many others injured, and the 1964 murder of civil rights workers Michael Schwerner, Andrew Goodman, and James Chaney, in Mississippi. The Klan was also responsible for many other beatings, murders, and bombings, including attacks on the Freedom Riders, who sought to integrate interstate buses.

In many instances, the Federal Bureau of Investigation (FBI), then under the control of J. EDGAR HOOVER, had intelligence that would have led to the prevention of Klan violence or conviction of its perpetrators. However, the FBI did little to oppose the Klan during the height of the civil rights movement.

By the 1990s, the Klan had shrunk to under ten thousand members and had splintered into several organizations, including the Imperial Klans of America, the Knights of the White Kamelia, and the American Knights of the Ku Klux Klan. These factions also sought alliances with a proliferating number of other white supremacist groups, including the Order and Aryan Nations. Like these groups, the KKK put new emphasis on whites as an "oppressed majority," victimized by Affirmative Action and other civil rights measures.

The Klan's campaign of hatred has spurred opposition from many fronts, including Klanwatch, an organization started by lawyer and civil rights activist Morris Dees in 1980. The group is affiliated with Dees's Southern Poverty Law Center, in Montgomery, Alabama. In 1987, Dees won a $7 million civil suit against the Alabama-based United Klans of America for the 1981 murder of a 19-year-old man. The suit drove that Klan organization into Bankruptcy. In 1998, Dees and the Southern Poverty Law Center won a civil suit against the Christian Knights of the Ku Klux Klan, who were accused of burning down the Macedonia Baptist Church in Bloomville, South Carolina. The center won an unprecedented $37.8 million in damages.

The KKK suffered other setbacks. For example, in 1990 the Georgia Supreme Court upheld the constitutionality of that state's Anti-Mask Act (Ga. Code Ann. § 16-11-38) by a vote of 6–1 (State v. Miller, 260 Ga. 669, 398 S.E. 2d 547). The case involved a Klan member who had been arrested for wearing full Klan regalia, including mask, in public and had claimed a First Amendment right to wear such clothing. The court ruled that the law, first passed in 1951, protected a State Interest in safeguarding the right of people to exercise their civil rights and to be free from violence and intimidation. It held that the law did not interfere with the defendant's Freedom of Speech.