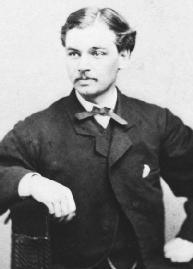 Robert Todd Lincoln was a lawyer, a presidential elector for the Illinois branch of the Republican Party in 1880, secretary of war in the cabinets of Presidents james garfield and chester a. arthur, U.S. minister to Great Britain from 1889 to 1893, president and chairman of the board for the Illinois-based Pullman Palace Car Company, and the son of President Abraham Lincoln.

Lincoln was born August 1, 1843, in Springfield, Illinois. At the age of 13, he began attending classes at Illinois State University. Lincoln subsequently enrolled in the Phillips Exeter Academy, a prominent preparatory school, and then attended Harvard. His years there were concurrent with his father's presidency, between 1861 and 1865.

Lincoln graduated from Harvard on July 20, 1864, and in September of that year he enrolled in Harvard Law School. He then opted to enlist in the army. On February 11, 1865, Lincoln was appointed captain and assistant adjutant general of Union Army Volunteers. In his service, he witnessed the surrender of General Robert E. Lee at Appomattox, Virginia, on April 9, 1865.

In 1881, a disappointed office seeker shot President Garfield. Garfield died from his wound in September of that year, and Chester A. Arthur became president. Lincoln continued in his cabinet duties until March 1885. By then, he had re-emerged as a possible Republican candidate for president. However, this was not a position in which Lincoln had a great interest, and ultimately he did not run for the office.

Lincoln nevertheless continued to serve in important federal positions. In 1889, he served as minister to Great Britain. In 1892, his name was discussed for a final time as a potential nominee for president. Lincoln appeared more interested in resuming his work as a lawyer, however.

"Understand that I still do not like the 'Honest Abe' business at all, but I am acting on the understanding that there is no escape from that part of it."
—Robert Todd Lincoln

Lincoln returned to private life, serving as president of the Pullman Palace Car Company until 1911, and then as the chairman of its board. In the ensuing years, his health began to fail, and he made few public appearances. He saw the dedication of the Lincoln Memorial on May 30, 1922, but he declined to speak.

Lincoln died in his sleep at the family estate in Hildene, Vermont, where he was found by his butler on July 26, 1926. His remains were moved from Manchester, Vermont, to Arlington National Cemetery, outside of Washington, D.C., in 1928.

Oates, Stephen B. 1994. With Malice Toward None: A Life of Abraham Lincoln. New York: Harper Perennial.