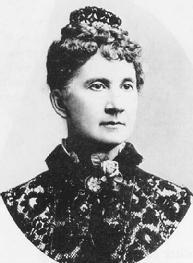 Belva Ann Lockwood achieved prominence as the first woman to be admitted to argue cases before the U.S. Supreme Court. In addition to her legal career, she was active in many phases of the campaign for Women's Rights.

Lockwood was born October 24, 1830, in Royalton, New York. A graduate of Genessee College in Lima, New York, in 1857, Lockwood received an honorary master of arts degree from Syracuse University in 1871 and a doctor of laws degree in 1908. Before her admission to the Washington, D.C., bar in 1873, Lockwood taught school from 1857 to 1868. She began her fight for women's rights with her work advocating the passage of a bill granting female government employees equal pay for equal work. In 1879 Lockwood further advanced the cause of women to the judiciary with her participation in the enactment of a bill permitting women to practice law before the U.S. Supreme Court. As a result she became the first woman to be admitted to this court and was subsequently admitted to practice before the former U.S. Court of Claims.

Lockwood continued her legal career while participating in reform movements, notably those for temperance and women's suffrage. At the height of her popularity in the 1880s, Lockwood was nominated by the Equal Rights party as a candidate for president of the United States in 1884 and 1888, the first woman to receive this honor.

In 1896 Lockwood was chosen to represent the United States at the Congress of Charities and Corrections held in Switzerland. After her return she continued her work in the women's rights movement and was instrumental in the formulation of the law granting women residents of the District of Columbia equal property rights and equal claims to the custody of children. She also drafted an amendment to the statehood bills of Oklahoma, Arizona, and New Mexico, allowing women in these states the right to vote.

A staunch advocate of peace, Lockwood served as a representative to the Universal Peace Congress held in Paris in 1889 and participated at the International Peace Bureau at Bern, Switzerland, in 1892.

"I know we can't abolish prejudice through laws, but we can set up guidelines for our actions by legislation."
—Belva Lockwood