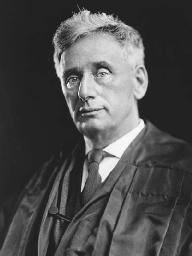 Feedback
Flashcards & Bookmarks ?
Please log in or register to use Flashcards and Bookmarks. You can also log in with
Flashcards ?
My bookmarks ?
+ Add current page to bookmarks
References in periodicals archive ?
(3.) Louis Dembitz Brandeis, The Curse of Bigness, ed.
Laboratories of Democracy? Brandeis, Federalism, and Scientific Management
Profiles of the proverbial Judah Touro, Mordecai Noah, and Isaac Leeser, are surpassed only by the chapter-length portraits of Marcus's demigods, Isaac Mayer Wise, "a self-centered braggart" (III, 70), and "The American Herzl: Louis Dembitz Brandeis" who Marcus concedes, "never went to synagogue to pray, yet ...
Jacob Rader Marcus: historian-archivist of Jewish Middle America
The other soul yearns for former simplicities, for decentralization, for the interests of the `little man,' revolts against high-pressure salesmanship, denounces `monopoly' and `economic empires,' and seeks means of breaking them up."(1) Throughout his long and distinguished public life, Louis Dembitz Brandeis seemed, more than any other American, the authoritative voice of this "other soul," the keeper of Thomas Jefferson's faith in "little men and little institutions."(2) Born in 1856, educated in Dresden and at the Harvard Law School, Brandeis had won wealth and standing in Boston's cultural elite by the age of forty through his brilliant representation of corporate interests.
"Islands of conscious power": Louis D. Brandeis and the modern corporation
Legal browser ?
Full browser ?
CITE
Site: Follow: Share:
Open / Close