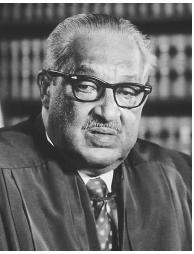 Thurgood Marshall, the first African American to serve on the U.S. Supreme Court, saw law as a catalyst for social change. For nearly 60 years, as both a lawyer and a jurist, Marshall worked to dismantle the system of Segregation and improve the legal and social position of minorities.

Marshall was born July 2, 1908, in Baltimore, the son of a Pullman porter and a schoolteacher. He was a graduate of Lincoln University, a small, all-black college in Pennsylvania, and Howard University Law School in Washington, D.C. At Howard, Marshall excelled under the guidance of Vice Dean Charles Hamilton Houston, the first African American to win a case before the U.S. Supreme Court. Houston encouraged his students to become not just lawyers but "social engineers" who could use the legal system to improve society. Marshall graduated first in his law class in 1933.

Marshall's attendance at predominantly black Howard University illustrates the barriers faced by African Americans during the early twentieth century. Although Marshall wished to attend law school at the University of Maryland (a public institution in his home town of Baltimore), he was prohibited by law from doing so because of his race. This injustice helped set Marshall on a course of opposing all forms of official segregation that denied equal opportunities to African Americans.

"The government [that the framers of the Constitution] devised required several amendments, a civil war, and momentous social transformation to attain the system of constitutional government, and its respect for the individual freedoms and human rights, that we hold as fundamental today."
—Thurgood Marshall

After law school, Marshall set up a practice in Baltimore, representing indigent clients in civil rights cases. In 1936, his mentor Houston offered him a position with the National Association for the Advancement of Colored People (NAACP), and in 1940, Marshall became director of the NAACP Legal Defense and Educational Fund, a position he held until 1961. Determined to eliminate segregation, Marshall coordinated a nationwide campaign to integrate higher education. He filed several successful lawsuits against public graduate and professional schools that refused to accept African-American students. These suits paved the way for similar cases at the high school and elementary school levels. Marshall also journeyed throughout the deep South, traveling fifty thousand miles a year to fight Jim Crow Laws (a series of laws that provided for racial segregation in the South) and to represent criminal defendants.

Marshall argued 32 cases before the U.S. Supreme Court and won 29 of them. No doubt his most famous and far-reaching triumph before the High Court was brown v. board of education of topeka, kansas, 347 U.S. 483, 74 S. Ct. 686, 98 L. Ed. 873 (1954). In that case, the father of African-American student Linda Brown sued the school board of Topeka, Kansas, over its segregation policy. Brown was required by law to attend an all African-American school several blocks from her home even though an all white public school was located in her own neighborhood. Under Kansas law, cities of more than 15,000 people, such as Topeka, could choose to operate segregated schools. Marshall argued that these segregated schools, defended by officials as "separate but equal," were unconstitutional.

The separate-but-equal doctrine originated in plessy v. ferguson, 163 U.S. 537, 16 S. Ct. 1138, 41 L. Ed. 256 (1896), a case allowing segregated public accommodations for whites and blacks. In a plainspoken argument, Marshall dismissed as fallacy the notion that segregated schools offered the same educational experiences to black and white students. Sociological and psychological studies demonstrated that black children were in fact harmed by the policy of school segregation. The students' self-esteem was damaged and their future diminished when they were forced to accept inadequate facilities, equipment, and educational opportunities. Marshall argued that the only purpose segregation served was to perpetuate the myth of African-Americans' inferiority. A unanimous Court agreed and struck down the separate-but-equal doctrine, a momentous victory for Marshall, affecting public schools in twenty-one states.

While on the Court, Marshall was known more for his impassioned dissents than for his majority opinions. In particular, as a staunch opponent of Capital Punishment, he regularly voiced his disagreement with the majority in death penalty cases. He was also a firm backer of Affirmative Action and contributed one of his most famous dissents in regents of the university of california v. bakke, 438 U.S. 265, 98 S. Ct. 2733, 57 L. Ed. 2d 750 (1978). In that case, Marshall criticized the high court's ruling that a public medical school's policy of reserving 16 of 100 spots for minority students was unconstitutional. Marshall also dissented in San Antonio Independent School District v. Rodriguez, 411 U.S. 1, 93 S. Ct. 1278, 36 L. Ed. 2d 16 (1973), disagreeing with the majority view that a Texas property tax system used to fund public education was acceptable, even though it allowed wealthier districts to provide a better school system for students in those districts than less wealthy districts could provide. Marshall objected strongly to the property tax arrangement, claiming that it deprived poor children of an equal education.

Marshall retired from the Court in 1991, but continued his criticism of government policies that were detrimental to African Americans or other disenfranchised groups.

Marshall died on January 24, 1993, in Bethesda, Maryland. Upon Marshall's death, nearly 20,000 mourners filed by his casket during the 12 hours it lay in state in the Great Hall of the U.S. Supreme Court.