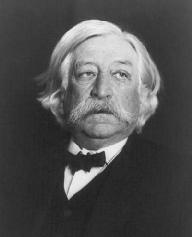 Melville Weston Fuller served as chief justice of the U.S. Supreme Court from 1888 to 1910. Fuller's term as chief justice was marked by many decisions that protected big business from federal laws that sought to regulate interstate commerce. In addition, the Fuller Court's restrictive reading of the Fourteenth Amendment led it to render the infamous separate but equal racial Segregation decision in Plessy v. Ferguson, 163 U.S. 537, 16 S. Ct. 1138, 41 L. Ed. 256 (1896).

Fuller was born February 11, 1833, in Augusta, Maine. He grew up in the household of his maternal grandfather, the chief justice of the Maine Supreme Judicial Court. Following his graduation from Bowdoin College in 1853, he apprenticed in his uncles' law offices and briefly attended Harvard Law School. Even though he did not receive a law degree, he was the first chief justice of the U.S. Supreme Court to serve with significant academic legal preparation. Fuller moved to Chicago in 1856 and established a law practice. An active member of the Democratic Party, he served in the Illinois Constitutional Convention of 1861 and for one term (1862–64) in the state house of representatives. He attended as a delegate every national Democratic convention between 1864 and 1880.

Fuller withdrew from day-to-day politics after he married Mary Ellen Coolbaugh, the daughter of a prominent Chicago banker, in 1866. His law practice thrived because of this family connection, and with his new wealth, he invested in real estate. Fuller specialized in appellate practice, appearing before the U.S. Supreme Court many times.

Fuller's appointment to the Court in 1888 was driven by presidential politics and his long service to the Democratic Party. President grover cleveland, a Democrat who believed that it would be essential to win the state of Illinois as part of his re-election bid, nominated Fuller as chief justice to replace morrison r. waite, who had died in March 1888. Fuller and Cleveland were friends and political colleagues. At the time, the press described Fuller as "the most obscure man ever appointed Chief Justice" (Baker 1991, 360). Others were more unkind, dubbing him "the fifth best lawyer from the City of Chicago" (review of The Chief Justiceship of Melville W. Fuller 1996, 109).

Fuller's 22-year term as chief justice was distinguished by his skillful handling of often contentious Court conferences. Justice oliver wendell holmes, jr. thought highly of Fuller's ability to maintain collegiality. At the end of his own legal career, Holmes ranked Fuller as the best chief justice under whom he had served. Fuller was an energetic jurist who also served on the Permanent Court of Arbitration, at The Hague, Netherlands. That international organization, comprising jurists from various countries, ruled on world disputes. In 1899, Fuller arbitrated a boundary dispute between Venezuela and British Guyana.The U.S. economy grew rapidly while Fuller served as chief justice. This expansion led to the concentration of economic power in certain industries by a small number of individuals and corporations. The federal government's efforts to regulate interstate commerce and to curtail the power of monopolies and trusts met fierce opposition from both the affected businesses and those who believed in a restricted role for the national government. Opponents of national power argued for continued adherence to the doctrine of Federalism. That doctrine has many facets, including a fundamental assumption that the national government must not intrude on the power of the states to manage their affairs.

Fuller believed in federalism, and he demonstrated this belief in his votes with the conservative majority on the Court. Writing for the majority in United States v. E. C. Knight Co., 156 U.S. 1, 15 S. Ct. 249, 39 L. Ed. 325 (1895), Fuller took the teeth out of the Sherman Anti-Trust Act of July 2, 1890, which had declared illegal "every contract, combination in the form of a trust, or conspiracy in restraint of trade and commerce among the several states" (26 Stat. 209, c. 647). Finding in favor of the Sugar Trust, a corporation that controlled virtually all sugar refining, Fuller held that a Monopoly of manufacturing was not a monopoly of trade or commerce prohibited by the Sherman Act, as the manufacture of a product for sale is not commerce. It was up to each state, not the federal government, to protect its citizens from monopolistic business practices. The mere fact that goods were transported in interstate commerce was not sufficient to give Congress, under the Commerce Clause, the authority to regulate business. The holding in Knight survived until the New Deal era of the 1930s, when power shifted to the federal government.

Fuller's belief in a limited role for the federal government was also demonstrated in pollock v. farmers' loan & trust co., 157 U.S. 429, 15 S. Ct. 673, 39 L. Ed. 759 (1895). In Pollock, Fuller ruled invalid a federal law that imposed a two-percent tax on incomes of more than $4,000. Article I of the Constitution requires that "direct taxes shall be apportioned among the several states … according to their respective numbers." In a 5–4 vote, Fuller's Court held that the new Income Tax was a direct tax insofar as it was based on incomes derived from land and, as such, it had to be apportioned among the states. As the law did not provide for Apportionment, it was unconstitutional. Decisions such as Knight and Pollock led critics to call Fuller and the conservative members of the Court the puppets of business interests and the protectors of wealth. In response to Pollock, the Sixteenth Amendment was ratified by the states in 1913, authorizing the collection of a federal income tax.

Fuller's most dubious distinction is that he voted with the majority in Plessy to uphold racial segregation in public transportation. At issue in Plessy was an 1890 Louisiana law that required passenger trains that operated within the state to provide "separate but equal" accommodations for the "white and colored races." By a 7–1 vote, with one judge abstaining, the Court rejected the idea that the Fourteenth Amendment, enacted after the Civil War to preserve the Civil Rights of newly freed slaves, "could have been intended to abolish distinctions based upon color, or to enforce social, as distinguished from political, equality, or a commingling of the two races upon terms unsatisfactory to either."

With its focus on a limited national government and support of legally enforced racial segregation, the 22-year period of the Fuller Court has, in the words of legal historian Richard A. Epstein, "often been regarded as a black hole of American Constitutional law." With the conservative political and legal renaissance of the 1980s and 1990s, however, Fuller came back into favor, being regarded by some legal scholars as a jurist who was committed to economic development, market institutions, and limited government.

"If the provisions of the Constitution can be set aside by an act of Congress, where is the course of usurpation to end?"
—Melville Weston Fuller