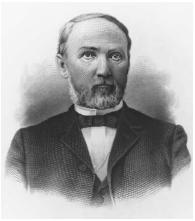 William Henry Harrison Miller served as U.S. attorney general from 1889 to 1893, in the administration of President Benjamin Harrison. Miller, Harrison's law partner and political adviser, was recognized for his incorruptibility.

Miller was born on September 6, 1840, in Augusta, New York. His connection with Benjamin Harrison appeared preordained, because Miller was named after the ninth president, William Henry Harrison, the grandfather of Benjamin. Miller attended country schools and Whitestown Seminary before enrolling at Hamilton College, from which he graduated in 1861.

He studied law in the office of future U.S. Supreme Court Chief Justice morrison r. waite and was admitted to the Indiana bar in 1865. He started a law practice in Peru, Indiana, and also held the office of county school examiner. In 1866 he moved his law practice to Fort Wayne, Indiana. He remained there until 1874, when he moved to Indianapolis and became the law partner of General Benjamin Harrison.

Harrison had achieved fame as a Civil War commander. For his heroism in leading the Seventieth Indiana Regiment, President abraham lincoln promoted him to brigadier general. Upon his return to Indianapolis, Harrison began to build a political career. Miller entered Harrison's law firm and the political arena. He soon became a trusted adviser to Harrison, who ran unsuccessfully for the Indiana governorship in 1876. Harrison later served in the U.S. Senate from 1881 to 1887, and in 1888 he was the Republican nominee for president. It was during the 1888 campaign that Miller served as a confidential adviser to Harrison, who defeated President grover cleveland.

Harrison, who had promised the country a Legal Deal, appointed six lawyers and two businessmen to his cabinet. Miller was named attorney general, a position he held for the four years of the Harrison administration. In 1890 Congress passed the Sherman Anti-Trust Act (15 U.S.C.A. § 1 et seq.), which outlawed trusts and monopolies that restrained trade. Miller did not make any effort, however, to use the new legislation.

The Harrison administration was untouched by scandal, but an economic depression in the West severely hurt the Republican Party. Democrat Grover Cleveland defeated Harrison in the 1892 election. Miller returned to Indianapolis in March 1893 and resumed his law practice.