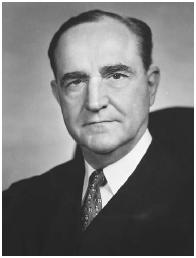 Sherman Minton served as an associate justice of the U.S. Supreme Court from 1949 to 1956. A strong supporter of President franklin d. roosevelt's New Deal policies when he served as a U.S. senator from Indiana, Minton maintained a consistent judicial philosophy that allowed the legislative and executive branches wide discretion without judicial interference.

Minton was born on October 20, 1890, in Georgetown, Indiana. He graduated from Indiana University in 1915 and earned a law degree from Yale Law School in 1916. He entered the private Practice of Law in Indiana but also devoted himself to Democratic Party politics. In 1934 he was elected to the U.S. Senate, where he served one term. While in the Senate, Minton was a staunch supporter of Roosevelt's legislative efforts, including the president's plan to "pack" the Court with extra justices to break the conservative majority that had ruled many pieces of New Deal law unconstitutional. Minton lost his seat in the 1940 election.

"One's associates, past and present, … may properly be considered in determining fitness and loyalty [for a job]."
—Sherman Minton

In 1941 President Roosevelt first appointed Minton to advise him on military agencies and planning and then nominated him to the U.S. Court of Appeals for the Seventh Circuit. President Harry S. Truman, who got to know Minton when they served in the Senate together, elevated him to the Supreme Court in 1949. During his confirmation process, Minton refused to testify before the senate judiciary Committee, claiming it would be improper to testify. Surprisingly, the committee did not object.

During his seven years on the Court, Minton maintained his belief that the judiciary should not intrude on the actions of the other branches unless absolutely required. His conservative view led him to support decisions that upheld anticommunist policies such as loyalty oaths and restrictions on the civil liberties of subversives. Minton, writing for the majority in Adler v. Board of Education, 342 U.S. 485, 72 S. Ct. 380, 96 L. Ed. 517 (1952), ruled that a New York statute that prohibited members of politically subversive groups from teaching in public schools was permissible.

As a result of his deference to the other branches of government, Minton was the only dissenter in youngstown sheet and tube co. v. sawyer, 343 U.S. 579, 72 S. Ct. 863, 96 L. Ed. 1153 (1952). In this case President Truman had claimed executive authority when he seized U.S. steel mills in 1952 as the steel workers union went on strike. This occurred during the second year of the Korean War. Truman needed steel for war production and wanted to make sure that a pay hike would not cause higher steel prices, which would increase inflation in the national economy. The majority rejected Truman's claim to inherent executive power in the Constitution to protect the public interest in times of crisis. Minton sided with the president's position.

Minton suffered serious health problems for several years and resigned from the Court for health reasons in 1956. He died on April 9, 1965, in New Albany, Indiana.