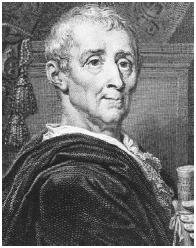 Charles-Louis de Secondat, Baron de la Brède et de Montesquieu, was a French social and political philosopher whose ideas about laws and government had great influence on the leaders of the American Revolution and the Framers of the U.S. Constitution.

Montesquieu was born January 18, 1689, in La Brède, France, just outside of Bordeaux, to an aristocratic family with considerable landholdings. As a young man, he studied Latin, French, history, and the law before graduating from the University of Bordeaux in 1708. In 1715 he married Jeanne Lartigue, whose family brought him substantial wealth, and a year later his uncle died and left him his title and his property, making Montesquieu extremely rich. While his wife remained in La Brède managing his estate, Montesquieu traveled and enjoyed the social and intellectual life of Paris, attending fashionable salons and meeting with leading thinkers in the areas of politics and literature. He also served as president á mortier, or justice, of the Bordeaux parlement, an office he inherited from his uncle.

In 1728 Montesquieu left Paris for a three-year trip through Europe. Montesquieu closely examined the people and cultures of the countries he visited, paying particular attention to England, where he was intrigued by the level of political and religious freedom the people there enjoyed, as well as the country's bustling mercantile economy. He remained in England for eighteen months. During this time he was introduced into the most prestigious intellectual and social circles, was admitted to court, was made a fellow of the Royal Society, and attended several sessions of Parliament. Montesquieu's experience in England was critical in shaping his political philosophies because it proved to him that a society could combine the Rule of Law with political freedom.

After returning home in May 1731, Montesquieu spent the next fifteen years working on his masterpiece, De l'Esprit des lois (literally On the Spirit of the Laws, but usually translated as The Spirit of the Laws). In this immense and loosely connected work, containing more than six hundred chapters grouped into thirty-one books, Montesquieu combined a lifetime of thoughts and personal observations concerning governments, laws, and human nature. His topics ranged from detailed analyses of ancient history to the effects of climate on national character. By closely examining a wide variety of societies through time and across cultures, Montesquieu sought to identify the basic principles underlying how laws work, how they evolve, and how they differ from country to country and culture to culture.

The Spirit of the Laws was published in 1748 in Geneva. It was a huge and immediate success; by the end of 1749, twenty-two other editions, including many translations, had reached all over Europe and across the ocean to the North American colonies. The work also generated considerable controversy, particularly with church authorities. They objected to Montesquieu's intellectual approach, which was grounded in the then radical notion that laws were not divinely inspired or handed down by ancient lawgivers such as Moses but evolved naturally out of everything that influences life in a country, including traditions, habits, history, religion, economics, and climate. Laws, Montesquieu believed, could be rationally studied and then adjusted to increase liberty for all. He responded to criticisms of his work in 1750 with Defense de l'Esprit des lois, but the Catholic Church nevertheless put The Spirit of the Laws on the church's Index in 1751, which meant that Catholics were forbidden to read it. Despite this official censure, Montesquieu was named director of the Academie Française in 1753.

On January 29, 1755, Montesquieu became ill with what appears to have been influenza, and his health quickly deteriorated. His sickness generated much attention; many people viewed it as symbolic of the great conflict between established religion and the forces of reason and enlightenment that marked the eighteenth century. During his illness Montesquieu's house was filled with friends monitoring his condition, including messengers from the king. Montesquieu died on February 10, 1755, and was buried in the parish church of Saint-Sulpice.

As was the case in Europe, Montesquieu was a leading intellectual figure in the American colonies, and The Spirit of the Laws was a standard subject of close study for young American scholars. Figures show that Montesquieu's works, particularly The Spirit of the Laws, were widely disseminated through American booksellers and libraries, and Montesquieu's ideas were frequently discussed in newspapers and journals. Montesquieu's works were found in the personal libraries of nearly all of the country's founding fathers, including Benjamin Franklin, John Adams, Thomas Jefferson, and James Madison.

Different elements of the theories Montesquieu outlined in The Spirit of the Laws were popular in America at different times, varying with political conditions and developments. In general, however, the most influential portions of the work were chapters 3 and 6 of book XI, in which Montesquieu analyzed the English constitution, a discussion that heavily influenced the Separation of Powers later enshrined in the U.S. Constitution. In his analysis Montesquieu outlined the basic principle of the English constitution, which was—and still is—not an actual document but an unwritten consensus regarding the proper rules of governing based on such historical documents as the Magna Charta, the body of Common Law, court decisions, precedents, and tradition.

This type of liberty, Montesquieu argued, was only possible under a government specifically constituted to protect citizens from the oppression of their rulers and the aggressions of each other, while allowing for the representation of a wide range of popular interests. For citizens to maintain their liberty against the encroachment of oppressive rulers, a government had to be composed of separate and balanced powers that would check and moderate each other, thus leaving the people a maximum degree of freedom under the laws.

To Montesquieu, England most closely approximated this model because its government divided the three main functions of government—the legislative, the executive, and the judicial—into three separate branches: the Parliament, the monarch, and the courts. The powers of these branches were so intertwined that the branches needed each other to operate and also served to moderate each other's actions. For example, the king or queen could Veto parliamentary legislation, but the monarch's actions were limited by Parliament's power of the purse. Because no single branch was able to dominate the other branches or the populace at large, the people were left with a large degree of political freedom. Because the branches had to operate together, their forces counterbalanced each other and resulted in a guarantee of freedom and a bulwark against political tyranny. Although Montesquieu did not present the English system as the perfect model for democratic government, he did praise it for being the only government in modern Europe constituted for the specific purpose of maximizing political liberty.

Montesquieu's description of the basic principles of the English constitution and his emphasis on political liberty held great appeal for the English colonists in North America, particularly beginning in the 1760s when those colonists were chafing under taxes and restrictions imposed by Parliament that they thought undermined their constitutional rights. Montesquieu was frequently quoted in newspapers, pamphlets, and speeches as colonists protested the oppressive powers of Parliament and defended their right to political liberty. His description of the English constitution became a model against which the colonists contrasted what they saw as the injustice and corruption of the actual English government.

After the Revolutionary War ended, Montesquieu again became a principal authority as political leaders set about to create a constitution for the new United States of America. Most of the architects of the Constitution were thoroughly acquainted with Montesquieu's ideas, and at the Constitutional Convention of 1787, The Spirit of the Laws was frequently cited as delegates attempted to lay down the principles for a government that would maximize political liberty while also maintaining the rule of law. The Framers followed many of Montesquieu's maxims, including his insistence upon a separation of powers and his belief that a country's laws must not be imposed from above but conform to the genius, or nature, of the citizens of that country.

Montesquieu's arguments were also used in the debates over the ratification of the Constitution that followed the Constitutional Convention. He was cited with particular frequency in The Federalist Papers, which were written by James Madison, Alexander Hamilton, and John Jay to argue in favor of the new Constitution. The writers cited Montesquieu at length in defense of the wisdom of confederating the states into a single republic and of creating a government based upon a separation of powers. Although other scholars had also written on the separation of powers principle, Montesquieu was most closely associated with it, as James Madison noted in The Federalist, no. 47: "The oracle who is always consulted and cited on this subject, is the celebrated Montesquieu. If he be not the author of this invaluable precept in the science of politics, he has the merit at least of displaying and recommending it most effectually to the attention of mankind." Montesquieu's arguments were also frequently used in the debates over the Constitution at the individual state conventions. Both proponents and opponents of the new Constitution respected him as a political authority, and both used his writings to bolster their arguments.

After the ratification of the Constitution in 1789, Montesquieu continued to remain an authority on the creation of laws and the rule of government. The Spirit of the Laws continued to be taught at Colleges and Universities, and leaders of both political parties, the Republicans and the Federalists, used his arguments to advance their own. Montesquieu's only significant detractor was Thomas Jefferson, who believed, along with friends involved in the impending revolution in France, that Montesquieu was too enamored with England and its constitution. After the French Revolution and the radical changes it wrought, Montesquieu's writings came to seem dated and less relevant, and they gradually faded from the political debates. Even so, his work continued to exert a lasting influence on the laws of the United States through the Constitution that was so significantly shaped by his ideas.