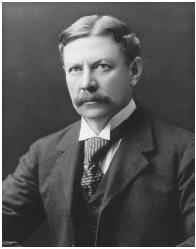 William Henry Moody, Supreme Court appointee of Theodore Roosevelt, served the Court from 1906 to 1910. The Massachusetts Republican, representative, and two-time cabinet member supported the progressive policies of his era. He was especially respected by his colleagues for his skill in the area of Antitrust Law. Moody's service on the Court was ended prematurely due to health problems.

Moody was born on December 23, 1853, in Newbury, Massachusetts from a long line of New England, Puritan ancestry. He was educated at Phillips Academy and found his first real success in life as an athlete on the Harvard baseball team. He graduated from Harvard in 1876 with honors in history, ranking third in his class. After Harvard, he worked in the law office of richard dana. He was admitted to the bar in 1878.

Moody established a private practice in Haverhill, Massachusetts, and served as the city solicitor for two years (1888–1890). In 1890 he was appointed district attorney for the eastern district of Massachusetts. He was one of the state's two prosecutors in the trial of Lizzie Borden, who was charged with murdering her father and stepmother with an ax in 1892. Although Borden was acquitted, Moody won respect for his performance in the trial.

Shortly after the Borden case, the Republicans nominated Moody to a seat in Congress. He was elected to the House of Representatives in November 1895 and became one of its most influential members. On April 30, 1902, he resigned from the House to become Theodore Roosevelt's secretary of the Navy.

Two years later he was appointed attorney general. He successfully argued the landmark antitrust case of Swift and Company v. United States, 196 U.S. 375, 25 S. Ct. 276, 49 L. Ed. 518 (1905), before the Supreme Court. The government had obtained an Injunction against the trust by arguing that a combination of corporations and individuals, after purchasing livestock and converting it to fresh meat, sold products in interstate commerce in such a manner as to suppress competition both in livestock and fresh meats. The trust appealed the injunction. Moody won a perpetual injunction, but the trust ignored it. Moody was infuriated and instigated a Grand Jury investigation in Chicago, which led to indictment of all the major packers. Through Moody's success in prosecuting Swift and Company, the Supreme Court first formulated the "stream of commerce" doctrine, which held corporations responsible for all of their interstate commercial activities.

Moody continued to serve the Court until 1910, at which time acute rheumatism forced his retirement. He died July 2, 1917, in Haverhill, Massachusetts.