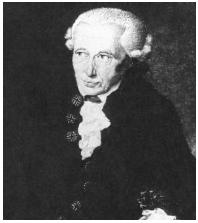 Immanuel Kant shook the foundations of Western philosophy in the late eighteenth and early nineteenth centuries. This author and professor did his most important writing between 1781 and 1790 while working at the University of Königsberg, where he spent most of his life. Kant's philosophical model not only swept aside the ideas of the so-called empiricists and rationalists who came before him, it also had a lasting effect outside of philosophy, especially in the areas of ethics and the law. Today, legal scholars still debate his ideas—and their sometimes startling implications—in relation to contemporary issues.

Kant was born into a lower-middle-class family in East Prussia in 1724. A gifted student, he studied in a Latin school from age eight until age sixteen, when he entered the University of Königsberg to take up theology, natural science, and philosophy. The death of his father forced him to abandon his studies in order to work as a private tutor, and he had to wait several years before returning to complete his education. By that time he was already writing serious books. From what is called Kant's precritical period, these early works are primarily scientific. In recognition of his talents, the university made him a lecturer and eventually a professor. He taught logic and metaphysics.

Twenty years later Kant attacked the reigning schools of thought. In this so-called critical period, he wrote his most famous book, The Critique of Pure Reason (1781). Kant's work examined the relation of experience and perception: he was concerned with how people know what they know, and just as important, the proper uses of the powers of reasoning. He argued that reality can be perceived only to the extent that it complies with the aptitude of the mind that is doing the perceiving. This places one kind of limitation on what can be known. Kant saw another limitation, too: only phenomena—things that can be experienced—are capable of being understood; everything else is unknown. The human senses, therefore, take supreme precedence in determining what is real.

These theories have implications for conventional morality. Kant viewed God, freedom, and immortality as incomprehensible: they can only be contemplated; their existence can never be proved. Nonetheless, he argued, all three of them are important as the basis for morality. Kant believed that reason is insufficient to justify moral behavior. The justification for behaving morally has to come from people's sense of duty, which he called the categorical imperative.

Kant continued to develop his philosophy in subsequent books including Critique of Judgment (1790) and Religion within the Limits of Reasons Alone (1793). The latter enraged the government, resulting in its Censorship and an official order to Kant to write no more books about religion.

"The greatest problem for the human species, the solution of which nature compels him to seek, is that of attaining a civil society which can administer justice universally."
—Immanuel Kant

Philosophers have studied Kant's work for over two centuries, but legal thinkers outside of Europe have only widely treated it in recent years. In the late twentieth century, when many U.S. scholars of law turned to interdisciplinary studies that involved the fields of economics and textual analysis, Kant provided another model for argument. Kant's ideas cover the foundation of law while specifically addressing property, contracts, and criminal punishment. Kant proposed that punishment should be meted out strictly without exception—because of society's duty to seek retribution. "[I]f justice goes," Kant wrote in 1797, "there is no longer any value in men's living on the earth."

Wright, R. George. 2002. "Treating Persons as Ends in Themselves; the Legal Implications of a Kantian Principle. University of Richmond Law Review 36, (March): 271–326.

Feedback
Flashcards & Bookmarks ?
Please log in or register to use Flashcards and Bookmarks. You can also log in with
Flashcards ?
My bookmarks ?
+ Add current page to bookmarks
Mentioned in ?
References in periodicals archive ?
(43) Tanaka saw that the unifying thread connecting all of the disparate attempts to reject the given order of things in favor of one form of social or political reengineering or another--be it Minodian statism or Suehirian pragmatism--was the wholesale adoption by most Japanese thinkers and political philosophers, whether they realized it or not, of neo-Kantianism. (44) It was in the shadow of this neo-Kantianism, prominent in Japanese intellectual life since the 1913 publication of a Japanese translation of Prolegomena zu einer jeden kunftigen Metaphysik die als Wissenschaft auftreten konnen, that subsequent Japanese philosophers would have to work out their moral and political philosophies.
Catholic Critiques of Statism in Interwar Japan: Minoda Muneki, Suehiro Izutaro, and Tanaka Kotaro
The principles of multiplicity and localization, of change and transformation, of exteriority and rarity must be untangled from the traces of neo-Kantianism and Heideggerianism, and fully restored to their vitalist force.
El sueno Kantiano: en los limites del "efecto Foucault"
Both experienced the contest between Neo-Kantianism and life-philosophy at the beginning of the twentieth century.
Carnap's "Elimination of Metaphysics through logical analysis of language": a retrospective consideration of the relationship between continental and analytic philosophy
(4.) As a result of the decline of early neo-Kantianism in 1910, Cassirer and Lask reformulated neo-Kantian ideas in bringing about a convergence with Lebensphilosophie and phenomenology.
The politics of realism: Lukacs and reflection theory
Opposing the reigning Neo-Kantianism, rationalism or scientism, Heschel preferred to draw upon Hasidic sources, that is, fervent attachment to God.
Jewish renewal in pre-nazi Berlin: Abraham Heschel interprets William James
Hermann Cohen, the great founder of Marburg neo-Kantianism gave this point of view a solid philosophical foundation and thus, without himself ever teaching it, began the academic enterprise we call Jewish ethics.
Our shifting/stable task: from "Choosing a Sex Ethic" to today
But, even with this service, it still is no clearer what Cassirer's brand of neo-Kantianism really amounts to, or whether it has any importance beyond merely historical interest.
Thora Ilin Bayer, Cassirer's Metaphysics of Symbolic Forms
Where Whewell exhibited a British form of Coleridgean Kantianism, Merz took up with the more positivist-friendly brand of German neo-Kantianism [the now-obscure Rupert Hermann Lotze (1817-1881) being his model].
Thomas Kuhn: A Philosophical History for Our Times. (the mistaken gestalt of science studies: Steve Fuller takes on Kuhn)
In the first part, 'Concepts', he reconstructs Lukacs's and Bakhtin's shared intellectual background of German philosophy (Neo-Kantianism, German Romanticism, Lebensphilosophie, and humanism) under the rubric of three traditional aesthetic concepts: culture, form and genre.
The master and the slave: Lukacs, Bakhtin, and the ideas of their time. (Book reviews - European studies)
One can demonstrate that theosis is not the only, or even the most effective, way to combat the reductionism represented by neo-Kantianism's "quivering, anorexic ontology." (7) In the second place, given the integral unity of justification by faith and union with Christ, the distinction between a soteriology based on justification and one based on theosis comes more clearly into view.
Justification and deification--problematic synthesis: a response to Lucian Turcescu
Privatization is compatible with some comprehensive doctrines, such as neo-Kantianism and Millian Utilitarianism, but incompatible with others, such as Islam, Thomism, and evangelical Christianity.
Toleration, Identity, and Difference