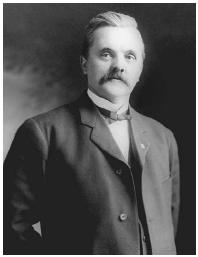 George William Norris was born July 11, 1861, in Sandusky County, Ohio. He graduated from Indiana Normal College in 1881 and pursued a career in law and politics. After admission to the Ohio and Indiana bars in 1883, Norris established a law practice in Nebraska, where he also served as prosecuting attorney. He presided as a Nebraska district court judge from 1895 to 1902.

In 1903, Norris was elected to the U.S. House of Representatives. In 1910, he was instrumental in modifying the House rules so as to diminish the excessive powers of House Speaker Joseph Gurney Cannon.

In 1913, Norris was elected to the Senate, where he would serve for the next 30 years. He opposed the entry of the United States into World War I but generally supported the policies of President Franklin Delano Roosevelt. During Roosevelt's administrations, Norris was involved in several important activities. In 1932, he drafted the Twentieth Amendment to the Constitution, which designated January 20 as the date of a presidential inauguration instead of the traditional March 4, thus eliminating the need for a "lame duck" congressional session. During that same year, he was instrumental in the passage of the Norris-Laguardia Act (29 U.S.C.A. § 101 et seq.), which restricted the use of injunctions in labor disagreements. He also helped to draft measures for the establishment of the Tennessee Valley Authority in 1933 and advocated programs for farm relief.