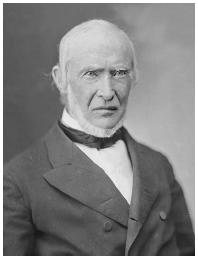 Charles O'Conor achieved prominence as a New York attorney and as counsel for the prosecution in the trial of the notorious Tweed Ring.

O'Conor was born January 22, 1804, in New York City. After his Admission to the Bar in 1824, O'Conor practiced law in New York for twenty years, specializing in corporation law. He attended the New York Constitutional Convention in 1846 and served as U.S. district attorney from 1853 to 1854.

In 1871 O'Conor began a four-year term as special deputy attorney general for New York State. During his tenure he acted as counsel for the prosecution in the trial of William M. ("Boss") Tweed and his followers, who controlled a corrupt political machine in New York City. The trial resulted in the disbandment of the Tweed Ring.

The year 1872 was a presidential election year and O'Conor was nominated for the presidency by a faction of the Democratic Party known as the Straight-Out Democrats. After his unsuccessful presidential campaign, O'Conor served, in 1877, as counsel during the investigation of the controversial Rutherford B. Hayes-Samuel Tilden election results.