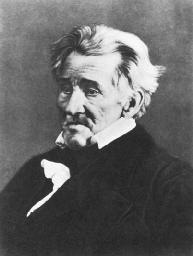 Andrew Jackson achieved prominence as a frontiersman, jurist, and military hero, and as seventh president of the United States. His two administrations, famous for ideologies labeled Jacksonian Democracy, encouraged participation in government by the people, particularly the middle class.

Jackson was born March 15, 1767, in Waxhaw, South Carolina. In 1781, Jackson entered the military, fought in the Revolutionary War, and was subsequently taken prisoner and incarcerated at Camden, South Carolina. After his release, he pursued legal studies in North Carolina and was admitted to the bar of that state in 1787.

Jackson relocated to Nashville in 1788 and established a successful law practice. Three years later, he married Rachel Donelson. When it was subsequently discovered that Mrs. Jackson was not legally divorced from her previous husband, Jackson remarried her in 1794 after her Divorce became final. His enemies, however, used the scandal to their advantage.

Jackson began his public service career in 1791 and performed the duties of prosecuting attorney for the Southwest Territory. He attended the Tennessee constitutional convention in 1796 and entered the federal government system in that same year.

As a member of the U.S. House of Representatives, Jackson represented Tennessee for a year before filling the vacant position of senator from Tennessee in the U.S. Senate during 1797 and 1798.

Jackson embarked on the judicial phase of his career in 1798, presiding as judge of the Tennessee Superior Court until 1804.

During the War of 1812, Jackson returned to the military and was victorious at the Horseshoe Bend battle in 1814. He conquered the British at New Orleans at the close of the war, which resulted in national recognition as a war hero.

In 1818, Jackson was involved in a military incident that almost catapulted the United States into another war with Great Britain and Spain. Dispatched to the Florida border to quell Seminole Indian uprisings, Jackson misunderstood his orders, took control of the Spanish possession of Pensacola, and killed two British subjects responsible for inciting the Indians. Spain and Great Britain were in an uproar over the incident, but Secretary of State John Quincy Adams supported Jackson. The incident added to Jackson's popularity as a rugged hero.

Jackson sought the office of president of the United States in 1824 against Henry Clay, John Quincy Adams, and William Crawford. No single candidate received a majority of electoral votes, and the House of Representatives decided the election in favor of Adams. Four years later, Jackson defeated the incumbent Adams and began the first of two terms as chief executive.

"Every man who has been in office a few years believes he has a life estateinit, a vested right. This is not the principle of our government. It is rotation of office that will perpetuate our liberty."
—Andrew Jackson

During his first administration, Jackson relied on a group of informal advisers known as the Kitchen Cabinet. The unofficial members included journalists and politicians, as opposed to the formal cabinet members traditionally involved in policymaking. He also initiated the spoils system, rewarding dutiful and faithful party members with government appointments, regardless of their qualifications for the positions. Many of Jackson's intimate associations did not include members from the traditional families associated with politics, and public dissatisfaction came to a head with the marriage of his Secretary of War John Eaton to the provincial Margaret O'Neill. The social politics employed by cabinet members and their wives, particularly Vice President and Mrs. john c. calhoun, caused much upheaval in the Jackson cabinet, and the eventual resignation of Eaton.

Calhoun and Jackson disagreed again in 1832 over a protective tariff, which Calhoun believed was not beneficial to the South. Calhoun initiated the policy of nullification, by which a state could judge a federal regulation null and void and, therefore, refuse to comply with it if the state believed the regulation to be adverse to the tenets of the Constitution. Calhoun resigned from the office of vice president after South Carolina adopted the nullification policy against the tariff act, and Jackson requested the enactment of the Force Bill from Congress to authorize his use of militia, if necessary, to enforce federal law. The Force Bill proved to be solely a strong threat, because Jackson sympathized with the South and advocated the drafting of a tariff compromise. Henry Clay was instrumental in the creation of this agreement, which appeased South Carolina.

The most significant issue during Jackson's term was the controversy over the Bank of the United States. The bank became a topic in the 1832 presidential campaign and continued into the second administration of the victorious Jackson.

The charter of the bank expired in 1836, but Henry Clay encouraged the passage of a bill to secure its recharter in 1832. Jackson was against the powerful bank and overruled the recharter. He proceeded to transfer federal funds from the bank to selected state banks, called "pet banks," which significantly diminished the power of the bank. Secretary of Treasury Louis McLane refused to remove the funds and was dismissed; similarly, the new treasury secretary, W. J. Duane, also refused. Jackson replaced him with roger b. taney, who supported Jackson's views and complied with his wishes. In response to this loyalty, Jackson subsequently nominated Taney as a U.S. Supreme Court justice in 1836.

In 1836, Jackson faced another financial crisis. He issued the Specie Circular of 1836, which declared that all payments for public property must be made in gold or silver, as opposed to the previous use of paper currency. This proclamation precipitated the economic panic of 1837, which ended Jackson's second term and extended into the new presidential administration of Martin Van Buren.

Jackson spent his remaining years in retirement at his estate in Tennessee, "The Hermitage," where he died on June 8, 1845.

Feedback
Flashcards & Bookmarks ?
Please log in or register to use Flashcards and Bookmarks. You can also log in with
Flashcards ?
My bookmarks ?
+ Add current page to bookmarks
Mentioned in ?
References in periodicals archive ?
Then I returned to the stand in the old hickory. Even as a seasoned bow-hunter, I was having trouble getting my head right after all the frustrations of my week.
TO IOWA FROM OHIO: AN AMAZING WEEK OF RUT BOWHUNTING ENDED WITH A MEMORABLE BUCK
Old Hickory and Gleason Clay share an experienced management team including President/CEO J.
Old Hickory Clay Flies High: Ball Clay Producer uses a Kespry Drone System for Site Surveys, Permit Application Materials, Reserve Calculations and Future Planning
Extensive combat coupled with casualties from the "friendly" bombs at Saint-Lo had already reduced the Old Hickory's ranks.
tough as Hickory
Trump has Andrew Jackson's portrait hanging next to the historic Resolute Desk in the Oval Office--and that he went to The Hermitage in Tennessee on March 15 to celebrate Jackson's 250th birthday--signifies that maybe he expects to follow Old Hickory's model.
Trump takes up the mantle of old hickory
When adding local wines to the 196-seat Old Hickory Steakhouse or the 41-seat Wine Bar, Martinez looks for reputation, quality and recognition.
Native expressions: wine pros show regional loyalty by selecting and serving local, terroir-driven wines
By 1897, it operated the largest farm and freight wagon factory in the world (covering 30 acres), with a capacity of 30,000 wagons per year under the trade names of Old Hickory and Tennessee.
Old hickory to the rescue
The West Tennessee ACEI joined in with the community leaders of Jackson, Tennessee, to support the 6th Annual Old Hickory Imagination Library Miniature Golf Tournament.
Puttin' for the kids
"[What] has been missing is a balanced and detailed portrait of Old Hickory that treats the dark sides of his personality, namely his defense of slavery and his murderous policy toward Native Americans, along with his efforts to vindicate the principle that the majority is to govern and his belief that the president is answerable only to the American people.
American Lion: Andrew Jackson in the White House
Andrew Jackson - nicknamed "Old Hickory" - whose picture is on the EUR20bill, was both revered and loathed by Americans.
Pres went nuts over Irish mum
"I'll race you to the old hickory tree," Pigtail said.
Pigtail and Duckweed
With songs like "Life Sucks," the show makes a case that Old Hickory may indeed have had a serious chip on his shoulder.
Los Angeles: pop politics