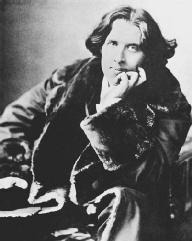 Oscar Wilde was a nineteenth-century Irish poet, novelist, and playwright who mocked social conventions and outraged English society with his unconventional ideas and behavior. Wilde's relevance to the law is based on his 1895 criminal trial, in which he was convicted of committing homosexual acts and was sentenced to two years in prison. Historians of law and sexuality regard the trial as a pivotal event, as it demonstrated that the legal system could be used to punish gays and lesbians.

"All authority is quite degrading."
—Oscar Wilde

Wilde was born in Dublin, Ireland, probably on October 16, 1854, although some sources say October 15 or 1856. He was a talented writer who achieved prominence—despite mixed literary criticism—with his first effort, Poems, in 1881. Many of his subsequent works are considered classics, including the novel The Picture of Dorian Gray (1891), and the plays Lady Windermere's Fan (first produced, 1892) and The Importance of Being Earnest (first produced, 1895).

As one of England's most flamboyant and sought-after socialites, Wilde nevertheless led an ordinary life in many respects. He married Constance Lloyd in 1884 and fathered two sons. In 1895, however, rumors of Wilde's homosexuality began to circulate, culminating in a scandalous libel trial.

The Marquess of Queensberry, whose name is associated with the accepted standards of boxing regulations, started the controversy by publicizing Wilde's sexual preferences. The marquess had discovered that his son, Alfred Douglas, had a relationship with Wilde, and he was determined to sever the ties. In February 1895, the marquess publicly accused Wilde of being a homosexual. English Law made homosexual relations a criminal offense.

Wilde professed innocence and took the marquess to court for criminal libel. At trial, the marquess's lawyer produced letters written by Wilde to Alfred Douglas, and their affectionate terminology was damaging to Wilde's case. As witnesses revealed Wilde's affiliations with male prostitutes and other men, Wilde considered retracting his accusation. The jury found the marquess not guilty, thus lending some credibility to his accusation against Wilde.

Soon after the conclusion of the trial, Wilde was arrested with a young man, accused of homosexual activities, and put on trial. At the trial, more information about his sexual activities emerged. The prosecution also introduced a poem by Alfred Douglas and questioned Wilde about several loving references to him.

Wilde's lawyers denounced the witnesses as characters of ill repute and pointed out conflicting facts in their testimonies. The trial ended in a hung jury, but Wilde was retried in May 1895. That time, Wilde was found guilty and sentenced to two years in prison. He was released from Reading Gaol (pronounced "JAIL") in May 1897 and moved to Europe, where he assumed the name Sebastian Melmoth. During his exile, he wrote "The Ballad of Reading Gaol," a long poem decrying the cruelty of British prison conditions, especially affecting child inmates. He also wrote letters to English newspapers to sway public opinion during consideration of new legislation. Most notably, on a personal and literary level, Wilde composed a letter to Douglas that was filled with recriminations against the younger man, which was published posthumously in edited form as De Profundis in 1905. Wilde died on November 30, 1900, in Paris.

In 2001, the transcript of Wilde's 1895 libel trial—which was thought not to exist—was donated anonymously to the British Library. Two-and-a-half years later, the library hosted a live reading with prominent British actors. The original documents, in stenographic shorthand, contain the entirety of the trial's proceedings, a marked improvement over the abbreviated, personal, and unofficial accounts.

Feedback
Flashcards & Bookmarks ?
Please log in or register to use Flashcards and Bookmarks. You can also log in with
Flashcards ?
My bookmarks ?
+ Add current page to bookmarks
References in periodicals archive ?
People travel from far and wide to see where Oscar Wilde was incarcerated
Why Reading prison is "Mecca" for the worldwide LGBT+ community; Councillor Karen Rowland says it is vital to convert the dormant building
Hamill, who is 'pleased be a part of this', said, "I attended the Oscar Wilde Awards when my dear friend Carrie Fisher was a recipient."
Mark Hamill to be honoured at Oscar Wilde Awards
"We're anticipating that the Oscar Wilde concept will be wildly successful at 45W27 because the atmosphere that ownership is aiming to create will resonate with people in the area."
Oscar Wilde's to open on West 27th
In second place in the top 10 of immortal insults is Lady Bracknell's line, from Oscar Wilde's e Importance Of Being Earnest, where she says: "To lose one parent, Mr Worthing, may be regarded as a misfortune; to lose both looks like carelessness."
Damn fine put-downs from Rhett to Darcy!
e Trials of Oscar Wilde is a play written by his grandson, Merlin Holland, the sole executor of his estate and author of e Real trials of Oscar Wilde.
Chronicling the downfall of a flawed genius
In previous entries in this series Oscar Wilde acted as the detective and Arthur Conan Doyle the role of Dr.
Oscar Wilde and the Murders at Reading Gaol
Oscar Wilde's classic comedy of manners is one of the best-loved plays ever written and the wonderfully witty lines are just as funny today as when the play was first performed in 1895.
SPEKE Classic Wilde play in the open air
Constance: The Tragic and Scandalous Life of Mrs Oscar Wilde. Franny Moyle.
MRS OSCAR WILDE--THE CONSTANT WIFE
This work chronicles seven generations of the Wilde family's scandals as well as its triumphs, in order to offer new insight on writer Oscar Wilde. There is much material on Oscar Wilde's parents, the revolutionary Irish poet Lady Jane Wilde, and the surgeon and archaeologist Sir William Wilde, who fathered three illegitimate children.
More lives than one; the remarkable Wilde family through the generations
Members of the Doha Players will this week take to the stage in the group's interpretation of Oscar Wilde's famous work The Importance of Being Earnest.
Players take a walk on Wilde side
Legal browser ?
Full browser ?
CITE
Site: Follow: Share:
Open / Close