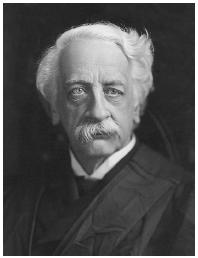 Rufus Wheeler Peckham served as an associate justice of the U.S. Supreme Court from 1895 to 1909. A prominent New York attorney and judge, Peckham was a conservative judge who believed that state and federal government had limited authority to regulate business activity. He expressed this belief most clearly in Lochner v. New York, 198 U.S. 45, 25 S. Ct. 539, 49 L. Ed. 937 (1905), a case that is best remembered for the dissent of Justice oliver wendell holmes jr.

Peckham was born in Albany, New York, on November 8, 1838, into a family of prominent lawyers and judges. He attended private schools and studied abroad as a young man. He read the law in his father's Albany law office and was admitted to the New York bar in 1859, following the lead of his older brother, Wheeler Hazard Peckham. After almost ten years in private practice, he began his career in New York government in 1868 when he became district attorney of Albany County. He served until 1872.

An active participant in New York State Democratic Party politics, Peckham and his brother Wheeler were aligned with the upstate wing of the party, which was often in conflict with the New York City faction that was dominated by the corrupt Tammany Hall regime. Wheeler Peckham was instrumental in the 1873 prosecution of the Tweed Ring, the Tammany machine run by William M. ("Boss") Tweed. His efforts would later hurt his legal career.

From 1880 to 1881, Rufus Peckham served as corporation counsel for the city of Albany. In 1883 he was elected to the New York Supreme Court (the state's trial court), and in 1886 he was appointed to the New York Court of Appeals (the state's highest court). In 1895 President grover cleveland nominated Peckham to the U.S. Supreme Court. This followed Cleveland's unsuccessful attempt to appoint Wheeler Peckham to the High Court in 1894. The appointment of Wheeler Peckham failed when New York Senators Edward Murphy Jr. and David Bennett Hill, both aligned with the New York City Democratic machine, blocked the nomination.

Rufus Peckham had little trouble winning confirmation. He joined a Supreme Court that was generally hostile to attempts by state and federal government to regulate business and the economy. Peckham fit right in. In Allgeyer v. Louisiana, 165 U.S. 578, 17 S. Ct. 427, 41 L. Ed. 832 (1897), he wrote the majority opinion that struck down a Louisiana insurance law as being a violation of the federal due process clause. He enunciated the doctrine of "liberty of contract" as a limit on state regulation of business. Government could not limit a person from entering "into all contracts which may be proper, necessary, and essential" to the conduct of a person's life.

Peckham reaffirmed liberty of contract in Lochner. In his majority opinion, Peckham held that a New York State law that limited bakers to no more than ten hours of work a day violated the "liberty of contract" guaranteed by the Fourteenth Amendment, which provided that no state was to "deprive any person of life, liberty or property without due process of law." The state's power to regulate was restricted to matters of health, safety, and welfare. In Peckham's view the restriction of hours did not fit into any of these three areas and therefore the law unconstitutionally interfered with the right of bakers and bakery companies to negotiate work hours and work conditions. Justice Holmes, in his dissent, castigated Peckham and the majority for reading into the Constitution their particular economic theory and for not practicing judicial restraint.