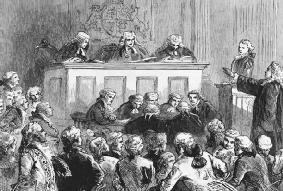 A trial that addresses political questions, involves political officials, or serves political agendas. In certain circumstances the term is used in a pejorative sense to criticize a particular trial or proceeding as unfair or unjust.

In many countries partisan trials are easy to identify because the prosecutors, judges, and defense attorneys are chosen by the government based on their allegiance to the regime's political philosophy. In other countries the government may exert subtle pressure upon judges and attorneys to influence the outcome of a case. In either situation such proceedings rarely produce a result that is fair or impartial. Some of the most notorious partisan trials took place in Adolf Hitler's Germany and Joseph Stalin's Soviet Union where many of the judges, prosecutors, and defense attorneys served as instruments of terror and propaganda for their totalitarian leaders.

A second familiar type of political trial involves the prosecution of religious and political dissenters. Since time immemorial, governments have been confronted by persons who disobey the law for reasons of conscience. Such disobedience, which can take the form of active or passive resistance, presents a dilemma for most governments.

On the one hand, governments must prosecute persons who disobey the law to maintain the integrity of the legal system. Yet if the prosecution takes place in a public forum, a political or religious dissenter is likely to question the propriety of a particular law or policy and challenge the legitimacy or competency of the existing government. On the other hand, if the government covertly silences a dissenter in private, the legal system exposes itself to charges of persecution, which compromises the public's respect for the law.

By prosecuting dissenters in open court before an impartial judge and an unbiased jury, the U.S. legal system attempts to strike a balance between the competing interests of the government and dissenters. Historically, many regimes have been unable to achieve this delicate balance. In ancient Greece 500 Athenian jurors made a martyr out of Socrates when they sentenced him to death for corrupting the youth and criticizing government officials. The Roman governor Pontius Pilate sparked concerted religious opposition to his government by condemning Jesus of Nazareth for blasphemously claiming to be the Son of God and King of the Jews. In 1735 British authorities planted the seeds of rebellion in the American colonies when they unsuccessfully prosecuted journalist John Peter Zenger for seditious libel.

A third common type of political trial involves nationalists who challenge a government's authority to represent them. Nationalists speak for an identifiable group of people who share a common characteristic, such as race, religion, or ethnicity. Trials of nationalists call into question both the unity of society and the capacity of a regime to speak for the people. Governments prosecute nationalists in part to publicly affirm their ability and resolve to govern the populace. Faced with certain defeat in the short run, many nationalists still present a vigorous defense to raise political awareness and record their battle for posterity.

The 1922 trial of mohandas k. gandhi, for example, served as a lightning rod of nationalism in India by uniting opposition against the oppressive imperial government of Great Britain. The Treason trials of Nelson Mandela in Pretoria, which took place in the late 1950s and early 1960s, similarly raised the consciousness of blacks in South Africa and focused the world's attention on the apartheid system of government. In both cases, though the nationalists were temporarily silenced by the regimes they opposed, their causes ultimately prevailed as their people were given an equal voice in the affairs of government.

These trials can serve at least two purposes. First, they can highlight the malignant qualities of the demised regime. Second, they can underscore the virtue of the new regime by tempering the vengeful calls for summary executions that regularly follow the cessation of hostilities in a revolution, civil war, or other type of military conflict. The Nuremberg War Crimes trials, in which twenty-four of the top Nazis were tried by the Allied powers following World War II, provides a modern example in which members of a vilified regime were afforded a full assortment of legal protections despite demands for summary execution.

In a limited sense all trials have a political element. As one of the three branches of government, the judiciary is an inherent part of the political system. Additionally, all trials carry with them tangible political ramifications by delineating the rights and responsibilities of civil and criminal litigants. Because many judicial decisions are considered precedent, the legal principles established in one case may be applied to other members of society in a subsequent analogous case.

However, in the United States the term political trial has acquired a broader meaning. A trial is generally characterized as political when it presents a question that transcends the narrow issue of guilt or innocence by implicating larger societal, cultural, or international considerations. The Watergate trials of the mid-1970s, for example, focused on the legal issues of breaking and entering, conspiracy, and Obstruction of Justice. However, these trials also dramatized the fall of a president and the consequences of abusing power.

Political trials often present basic dilemmas that engage the public in a common dialogue. These trials may prompt society to examine and even reconsider its fundamental values. Certain political trials, such as the Nuremberg and Watergate trials, have helped define an era or a nation.

Carville, James. 1998. And the Horse He Rode in On: The People vs. Kenneth Starr. New York: Simon & Schuster.

Levine, Mark, George C. McNamee, and Daniel Greenberg. 1970. Tales of Hoffman (From the Trial of the Chicago 7). New York: Bantam.

Feedback
Flashcards & Bookmarks ?
Please log in or register to use Flashcards and Bookmarks. You can also log in with
Flashcards ?
My bookmarks ?
+ Add current page to bookmarks
Mentioned in ?
References in periodicals archive ?
The international criminal trial (195) is a special type of political trial. The "defendant" is now a soldier or former leader of a (usually) defeated state; the prosecuting "government" is now a foreign power, or a coalition of foreign powers, which vanquished the other state.
Political trials in domestic and international law
THE political trial of rebel MP George Galloway became bogged down last night.
Rebel MP is defiant at Labour crunch
Fujimori argues on his recently launched Web site that the Peruvian military committed the killings without his knowledge, and said the moves to indict him are tantamount to a political trial without proof.
Peru Congress accuses Fujimori over mass killings
Following a political trial, he left for Austria, but eventually returned to Poland, first to Lvov and then Warsaw, where he started working in a bookstore, opening a lifelong career in the publishing and bookselling business.
Memorbuch. (Polish)
In February 1973 Israel was rocked by the political trial of Daud Turki, Udi Adiv and Dan Vered, together with their comrades in the Red Front.
Citizenship legislation in the Syrian Arab Republic
The military council Government tried to clarify its position by a lame excuse asserting that it was not a political trial, but it was criminal, because they were guilty of inciting murder.
Ken Saro Wiwa - murder of an intellectual
presidential candidate Senator Bernie Sanders, who said she was being put on a political trial not a legal one.
Brazil Senate Meets To Indict Suspended President Rousseff
"Instead, he was subjected to a political trial that was simply designed to confirm the demonisation of him and the Bosnian Serb people."
Former Bosnian Serb leader Karadzic appeals genocide conviction
Lawmakers decided last November to subject the four CSJ judges and the president of the TSJE to a political trial that was widely expected to result in their dismissal.
Paraguay's push to "clean up" corrupt judiciary slow to advance
He said in a political trial that "defied plausibility, 528 political men were convicted in just two court hearings and sound like an order for judicial murder to take political revenge, that is very strongly condemnable act.
Ansar Burney condemns Death Sentence to 528 Political workers in Egypt
Meanwhile, the main opposition group, al-Wefaq movement, issued a statement condemning "the continuing arrests, political trial and discrimination" against the country's Shiite majority.
Bahraini Protesters Rally against Regime Crackdown
"This is first and foremost a political trial and an important one.
Egypt's Morsi in court over protester deaths