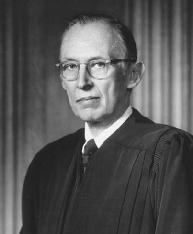 Lewis Franklin Powell Jr. served as an associate justice of the U.S. Supreme Court from 1972 to 1987. Powell, who came to the Court as one of the most distinguished lawyers in the United States, was a moderate conservative who became a key "swing" vote on a Court that became divided between conservatives and liberals.

Powell was born on November 19, 1907, in Suffolk, Virginia. A descendant of Virginia families who reached back to the settlement of Jamestown in 1607, Powell attended Washington and Lee University in Lexington, Virginia. He graduated with a bachelor's degree in 1929 and a law degree in 1931. He earned a master's degree from Harvard Law School in 1932.

"The guarantee of equal protection cannot mean one thing when applied to one individual and something else when applied to a person of another color. If both are not accorded the same protection, then it is not equal."
—Lewis F. Powell Jr.

Powell first entered law practice in Richmond, where he remained until he was appointed to the U.S. Supreme Court in 1971. His legal career was interrupted by World War II, during which he served as a U.S. Army Corps intelligence officer. Powell's reputation grew nationally during the 1950s and 1960s. He was elected president of the American Bar Association in 1964 and president of the American College of Trial Lawyers in 1968.

Unlike many U.S. Supreme Court appointees, Powell did not enter politics. He did, however, distinguish himself as a member and president of the Richmond Public School Board from 1952 to 1961, and later he was a member of the Virginia Board of Education. In the wake of brown v. board of education, 347 U.S. 483, 74 S. Ct. 686, 98 L. Ed. 873 (1954), which prohibited state-imposed racial Segregation in public schools, many southern communities pledged to defy or evade the Court decision. Some school boards closed the schools and encouraged attendance at white-only private schools, and others refused to integrate. Powell, as president of the Richmond Public School Board, peacefully integrated the school system and publicly called for cooperation rather than resistance to the Integration of society.

President richard m. nixon nominated Powell to the high court in October 1971. Nixon had offered him earlier appointments, but Powell had refused. He was easily confirmed and took his seat in January 1972. He joined a Court that was moving from a liberal majority to a more conservative makeup. Powell was a conservative on crime and law enforcement and a strong defender of integration and Civil Rights. In the 1980s, as the Court grew more conservative, Powell moved to the center and often provided the vote that broke a 4–4 deadlock.

Powell played a key role in regents of university of california v. bakke, 438 U.S. 265, 98 S. Ct. 2733, 57 L. Ed. 2d 750 (1978), which concerned the legality of Affirmative Action plans to remedy past racial discrimination. Powell wrote the opinion of the Court, holding that a university may consider the race of an applicant as part of its admission procedures. Powell also found, however, that the particular admissions program at issue in the case had unlawfully discriminated against Allen Bakke, a white applicant, by denying him admission to medical school solely on the basis of his race.

Powell also wrote the majority opinion in Batson v. Kentucky, 476 U.S. 79, 106 S. Ct. 1712, 90 L. Ed. 2d 69 (1986), which prohibited prosecutors from excluding prospective jurors on the basis of race. Under the Batson test, a defendant may object to a prosecutor's Peremptory Challenge (a removal of a prospective juror without offering a reason). The prosecutor then must "come forward with a neutral explanation for challenging black jurors." If a neutral explanation cannot be made, the juror will not be excused.