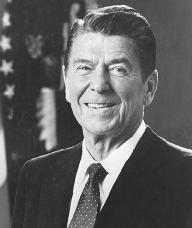 Ronald Wilson Reagan served as president of the United States from 1981 to 1989. A former radio announcer, screen actor, and governor of California, Reagan's conservative political philosophy challenged the role that the federal government played in U.S. society. An avowed opponent of big government, Reagan proposed to return power to the states and to strip the federal government of many of its regulatory functions. Although he was not successful on all fronts, Reagan changed the political landscape that had remained virtually untouched since the presidency of franklin d. roosevelt. Reagan was born on February 6, 1911, in Tampico, Illinois. When he was nine years old, his family moved to Dixon, Illinois. He attended nearby Eureka College and graduated in 1932. He worked as a radio and sports announcer at several stations in Iowa before he was discovered by a Hollywood talent scout. He signed an acting contract with the Warner Brothers motion picture studio in 1937.

Reagan appeared in more than 50 movies between 1937 and the early 1950s. His most famous role was that of Notre Dame University football player George Gipp in Knute Rockne—All American. (From that film comes the famous quote "Win one for the Gipper.") From 1942 to 1945, he served in the U.S. Army, making training films for World War II soldiers. It was after the war that Reagan became interested in politics, initially from his work with the Screen Actors Guild, a union that represents Hollywood film actors. Elected president of the union in 1947, Reagan was a vigorous supporter of the labor movement as well as an able negotiator with the major movie studios.

Originally a Democrat and an admirer of President Franklin D. Roosevelt, Reagan became concerned about communist influence in the Hollywood labor unions. During the late 1940s and early 1950s, Hollywood was embroiled in a Red Scare. The House Un-American Activities Committee (HUAC) held hearings where screen actors, screenwriters, producers, and directors were interrogated about their participation in communist organizations. Reagan initially defended his Hollywood brethren but soon backed away.

Reagan's Divorce from actress Jane Wyman in 1949 and his remarriage to actress Nancy Davis also had an effect on his politics. His new wife's father was a political conservative, who helped steer him toward the Republican Party. As his movie career declined, his interest in politics increased. He was hired by the General Electric Company to be its traveling spokesperson and the host of the General Electric Theater on television. From 1954 to 1962, Reagan maintained this relationship with General Electric. His conservative ideology deepened as he gave speeches around the country, supporting U.S. business, criticizing government regulation, and attacking Communism. Reagan became a national political figure during the 1964 presidential campaign. An ardent supporter of Arizona Senator barry m. goldwater, who espoused the same conservative philosophy, Reagan gave a televised speech that tried to revitalize Goldwater's sagging campaign against President lyndon b. johnson. Goldwater lost the election, but Reagan gained the attention of Republican political leaders.

At the urging of a group of prominent California businessmen, Reagan ran as the Republican candidate for governor of California in 1966. Democratic Governor Edmund ("Pat") Brown, who had defeated richard m. nixon in 1962, dismissed Reagan as a television actor and did not take him seriously. Reagan proved, however, to be a formidable opponent. A polished and effective public speaker, he spoke out against Welfare cheaters and antiwar radicals on college campuses. He won the election by nearly one million votes, the most convincing victory ever achieved against an incumbent governor in U.S. history.

Reagan's two terms as governor (he was reelected in 1970) were marked by conflict with a Democratic-controlled legislature. He raised state income taxes, contrary to his political platform, but he justified the increase as the means of paying for a reduction in local property taxes. He implemented some reforms in welfare programs and improved the state's higher-education system.

In 1974, Reagan decided not to run for a third term as governor, setting his sights instead on the White House. In 1976, he challenged President gerald r. ford for the Republican party nomination. Ford, who had become president in 1974 when Richard M. Nixon resigned, was a moderate Republican whose public favor had been severely damaged by his pardon of Nixon. Reagan fell only sixty votes short of defeating Ford for the nomination.

From 1976 to 1980, Reagan prepared himself for another presidential race. He remained in the public eye through a newspaper column and radio show, in which he commented on public affairs. In 1980, he defeated his Republican rivals and was nominated for president, with george h. w. bush as his running mate.

Reagan easily defeated President jimmy carter, whose popularity had plummeted when the national economy had suffered from high inflation and unemployment. Carter also was damaged by the Iranian hostage crisis, in which 52 Americans had been held hostage by Iran. His inability to resolve the hostage crisis, which included a failed military-rescue mission, contributed to his overwhelming defeat in November 1980. In 1984, Reagan won the largest victory in U.S. presidential history when he defeated former vice president Walter F. Mondale.

On January 21, 1981, as Reagan was being inaugurated president, Iran released the 52 hostages. With that crisis resolved, Reagan set out to cut income taxes, to reduce the Federal Budget, to increase defense spending, and to deregulate U.S. business. On March 31, 1981, his efforts were temporarily sidetracked when John W. Hinckley Jr. shot and wounded Reagan and his press secretary, James S. Brady. Reagan made a quick and complete recovery. In the aftermath of the shooting, his popularity rose even higher.

Reagan's economic plans were built on a theory called supply-side economics. This theory asserts that when taxes are cut, the money that is put back into the economy stimulates the production of more goods and services, thereby increasing jobs, with the result that more taxes are generated than were cut at the beginning of the process. In 1981, Reagan persuaded Congress to reduce taxes over a three-year period and to impose severe budget cuts on nondefense spending.

The results of "Reaganomics" proved mixed. The economy entered a recession in 1982, before rebounding in 1983. Inflation dropped, but government spending was not reduced sufficiently to make up for the revenue that had been forgone through tax cuts. The problem was exacerbated when Congress passed Reagan's tax-reform package in 1986. Tax rates were reduced, and millions of low-income persons were removed from the tax rolls. Consequently, the federal government borrowed money to pay for the tax cuts. The national debt doubled in size between 1981 and 1986. By the time Reagan left office, the United States had gone from a creditor nation to the world's largest debtor nation, owing half a trillion dollars to foreign investors.

"I believe that government is the problem, not the answer."
—Ronald Reagan

Pressure on the federal budget also came from Reagan's determination to begin the largest peacetime military build-up in U.S. history. Many new weapons systems were proposed, but the cornerstone of Reagan's defense system proposal was the Strategic Defense Initiative (SDI). Dubbed "Star Wars" by the media and his critics, Reagan proposed to build an antiballistic missile-defense system that would shoot down Soviet missiles from space. Billions of dollars were committed to research, but actual systems proved hard to devise.

In foreign affairs, Reagan came into office maintaining his strong anti-communist position, calling the Soviet Union an "evil empire." Reagan sought to negotiate arms control with the Soviet Union. In 1987, he negotiated the Intermediate-Range Nuclear Forces Treaty (INF Treaty). The INF Treaty was the first agreement by which both sides destroyed existing weapons. Relations between the superpowers improved during Reagan's second term, mainly because the new Soviet premier, Mikhail Gorbachev, had sought to change the Cold War climate.

Reagan made a dramatic change in the federal courts through his appointment power. During his two terms, he filled 372 of the 736 judgeships in the federal courts. Attorneys General William French Smith and edwin meese iii established a screening process that tried to assure Reagan that he would be appointing judges who were in agreement with his conservative philosophy. In 1982, Reagan appointed Sandra Day O'Connor to the U.S. Supreme Court. O'Connor was the first woman to sit on the Court. He elevated Justice william h. rehnquist to chief justice of the Court in 1986 and appointed Judge Antonin Scalia to the seat that Rehnquist had vacated.

Reagan encountered problems with two of his other nominees. When he nominated Judge robert h. bork in 1987 to succeed Justice lewis f. powell jr., the nomination met a firestorm of criticism. Bork was an outspoken jurist and one of the best-known conservative judges in the country. When the Senate defeated Bork's nomination, Reagan appointed Judge douglas h. ginsburg. Ginsburg withdrew his nomination after he disclosed that he had smoked marijuana. On his third attempt, Reagan successfully appointed Judge anthony m. kennedy to the Court.

The last two years of the Reagan administration were consumed with the political damage caused by the Iran-Contra Affair. Members of the National Security Council staff had secretly sold weapons to Iran, a terrorist state that was forbidden to purchase armaments under U.S. law. One goal of the weapons sales was to facilitate the release of U.S. hostages held in Lebanon, but another goal was to use some of the proceeds to support the Nicaraguan anti-communist Contra rebels against the Marxist Sandinista government. Because Congress had forbidden U.S. support of the rebels, the actions of Reagan's staff were illegal.

In late 1986, the details of these actions began to emerge. Reagan denied any knowledge of the actions that his advisers had taken, but Senate hearings on the matter in 1987 cast doubt on the president's statements. The hearings damaged Reagan's administration because they revealed that the president apparently had been out of touch with the conduct of national affairs.

Despite Iran-Contra, Reagan left office a popular president. In 1989, he retired to California.

In 1994, Reagan made public that he had been diagnosed as suffering from Alzheimer's Disease, an incurable, degenerative neurological disease marked by gradual memory loss, aphasia, and degradation of motor functions. By revealing his disease to the public, Reagan said that he hoped to foster greater public awareness of the disease and to spur research for treatment and a cure.

Wallison, Peter J. 2003. Ronald Reagan: The Power of Conviction and the Success of His Presidency. Boulder, Colo.: Westview Press.