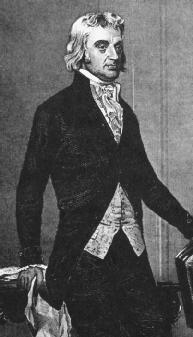 Robert R. Livingston served the United States in many ways, from participating in the Continental Congress, to administering the oath of office to George Washington and negotiating the Louisiana Purchase.

Livingston was born November 27, 1746, in New York City. His great-grandfather came to America in the 1670s with little, but through hard work and a fortuitous marriage soon began building a vast empire. Livingston's father, Judge Robert R. Livingston, was called the richest landowner in New York, and real estate holdings of the influential and politically active Livingston clan eventually totaled nearly 1 million acres.

After graduating from King's College (now Columbia University), Livingston studied law, and was admitted to the bar in 1770. He practiced law for a time with his college classmate and friend John Jay. In 1773 he received a political appointment as recorder for New York City, wherein he presided over certain criminal trials. He held the position until 1775, when his Revolutionary sympathies made him unacceptable to the Crown.

"On the whole I think it would be more dignified and more safe to act upon our ground and if we must enter into the war [against Napoleon], secure to ourselves all the advantages that may result from [doing so]."
—Robert Livingston

Livingston was elected to the Continental Congress in 1775. He was soon appointed to the committee charged with drafting a declaration of independence, with Roger Sherman, Benjamin Franklin, John Adams, and Thomas Jefferson. However, Livingston was apparently not involved in the actual drafting of the document; his appointment was seemingly a political maneuver designed to encourage the equivocating province of New York into a firm commitment to independence. Livingston himself was ambivalent. He believed that autonomy from Britain was necessary and inevitable, but inexpedient at that time; in debate he advocated postponement of the issue. When the Continental Congress voted on the declaration on July 2, 1776, New York abstained, preventing a unanimous ballot. The New York delegation was forced to abstain because the New York convention had not authorized it to vote affirmatively. Within weeks a newly elected New York convention ratified the declaration, and the ratification was retroactively ruled unanimous. When the signing of the Declaration of Independence commenced in Philadelphia on August 2, Livingston was elsewhere organizing a committee to coordinate New York's defense and conferring with General Washington on military matters.

Livingston, Jay, and Gouverneur Morris were the principal writers of New York's constitution, which was submitted for approval in 1777. Livingston's main contribution to the document was a council of revision, which could Veto legislation. The council of revision was composed of the governor, chancellor, and state supreme court justices.

In 1777 Livingston was appointed chancellor of New York, the state's highest legal officer, second in precedence only to the governor. In this position, which he held until 1801, he presided over the court of Equity. His legal abilities were highly regarded by his colleagues.

Livingston was again a delegate to the Continental Congress in 1779–80. A tireless worker, he was active on committees on financial affairs, military issues, legal organization, and foreign affairs, among others. He helped formulate a court of appeals. In 1780 he was nominated for an appellate judgeship, but declined the position.

In 1781 Livingston was appointed secretary of foreign affairs, a position he held for three years. He organized the newly established department. His most important contribution during this period was his diplomatic correspondence regarding peace with Great Britain. The Revolutionary War was over, but negotiating the peace was a lengthy endeavor. Finally, on April 19, 1783, the Treaty of Paris made it official, and Livingston had the honor of conveying the news to General Washington.

Livingston served in the Continental Congress again in 1784–85. In 1788 he was a leader in Poughkeepsie, New York, at the convention to ratify the U.S. Constitution. A staunch Federalist, he was one of the most frequent pro-Constitution speakers at the ratifying convention. Livingston, along with Alexander Hamilton, played a major role in the success of Federalism in New York at that time.

By virtue of his position as chancellor, Livingston administered the oath of office to President Washington in the national capital, then New York City, on April 30, 1789. His friend Jay was appointed chief justice of the U.S. Supreme Court, and Hamilton was named secretary of the treasury. Despite Livingston's activism the new government did not reward him with an office. Possibly for this reason, and because he disagreed with Hamilton's policy of federal assumption of state debts, Livingston turned anti-Federalist and entered into a political alliance with members of the Jeffersonian opposition—then called Republicans—in about 1791. Jefferson offered Livingston the secretaryship of the Navy in 1800, but he declined. In 1801 Jefferson named him minister to France. Once in Paris Livingston set about investigating rumors that Spain was about to cede its province Louisiana back to France, which had owned it until 1762. Livingston was charged with preventing this. If unable to do so, he was to procure parts of the province, including West Florida and New Orleans, for the United States.

Livingston soon discovered that the retrocession had already occurred. However, because of impending war with Great Britain, a French failure in Santo Domingo, and financial concerns, Napoléon suddenly offered to sell the entire Louisiana Territory to the United States. No one really knew how vast the region was, but it was generally agreed that the Mississippi River formed the eastern boundary and the Rocky Mountains the western edge. Livingston and James Monroe, who had recently joined him in Paris, negotiated the final deal for $15 million—purchasing approximately 828,000 square miles for only pennies an acre. Overnight, the size of the United States doubled. The Louisiana Purchase Treaty, closing the purchase from France, signed May 2, 1803, but antedated April 30, 1803, was the triumph of Livingston's career.

Livingston resigned his diplomatic post in 1804. After touring Europe he returned to his home in Clermont, New York, and retired from politics.

Livingston had long been interested in steam navigation. While in Paris he had met Robert Fulton, and the two men had entered into a partnership to develop a commercially successful steamboat. An early venture sank on the Seine, but in 1807 a new boat sailed on the Hudson River from New York City to Albany. The running speed of the Clermont approached five miles an hour, and cut sailing time to a small fraction of that required by the tall-masted Hudson River sloops then in use. Livingston had used his political clout to obtain a steam navigation Monopoly in New York in 1798, and he and Fulton set about attempting to exploit and extend the monopoly. Protracted litigation concerning the monopoly kept Livingston occupied in his final years.

Livingston was very active in his home state as well as nationally. In addition to working on New York's constitution, he was a leader in Revolutionary organizations replacing the Crown government, and was a member of the commission that governed the state after the Revolutionary War. In 1811 he was on the first canal commission, which eventually resulted in the Erie Canal.

Livingston also had a keen interest in farming, and maintained an active correspondence with Jefferson, Washington, and others regarding the latest scientific agricultural methods. He was a leader in importing merino sheep from Spain and using gypsum as fertilizer.

Feedback
Flashcards & Bookmarks ?
Please log in or register to use Flashcards and Bookmarks. You can also log in with
Flashcards ?
My bookmarks ?
+ Add current page to bookmarks
References in periodicals archive ?
"Robert Livingston," http://www.aoc.gov/cc/art/nsh/livingston.cfm
Reconstructing the Declaration of Independence and the committee of five for digital natives
The books, both published in 1999, are up to date, with full coverage through the autumn 1998 election results, the post-election fall from congressional leadership of Newt Gingrich and Robert Livingston, and the impeachment trial of President Clinton, including his acquittal in February 1999.
UNDERSTANDING AMERICAN GOVERNMENT
No sooner had impeachment been pronounced dead than Republicans proceeded to impeach Clinton, in the midst of which the new speaker-elect, Robert Livingston, preemptively fell on his sword because of his own sexual infidelities.
The Storm Amid the Calm
Besides the president, those exposed for past indiscretions, youthful or otherwise, included four conservative Republican representatives: Dan Burton of Indiana, Helen Chenoweth of Idaho, House Judiciary Committee chairman Henry Hyde of Illinois, and, in a bombshell delivered by Hustler publisher Larry Flynt (with promises of more to come), House speaker-elect Robert Livingston of Louisiana, who stunned his colleagues by revealing past affairs and then announcing his departure from Congress.
Sexual McCarthyism
Now that Newt himself has been ousted as Speaker, and the reportedly more collegial Robert Livingston of Louisiana elevated to the post, compromise could be in the air.
Easy Riders
However, responding to intense lobbying by the rule's opponents, including then-House Appropriations Committee Chair Robert Livingston (R-La.), Congress imposed a year-long moratorium on the rule as part of the FY 1999 Omnibus Appropriations Act.
Crisis in U.S. organ transplant system intensifies
Robert Livingston, a physician and a scientific director at the National Institutes for Health when Kennedy was shot, claims that he tried unsuccessfully to advise the autopsy physicians based on his expertise in gunshot wounds and neurology.
Assassination Science: Experts Speak Out on the Death of JFK
Indeed House Speaker Newt Gingrich (R-Ga.) termed the President's budget as "a budget only a liberal could love." House Appropriations Committee Chairman Robert Livingston (R-La.) said the White House Budget "violated the spirit" of last year's balanced budget act And Texas Sen.
Congressional leaders note challenges, contradictions
Josiah Bartlett), Brent Spiner (John Adams), Tom Aldredge (Stephen Hopkins), John Herrera (Roger Sherman), Tom Riis Farrell (Lewis Morris), Daniel Marcus (Robert Livingston), Jerry Lanning (Rev.
1776
House Appropriations Chairman Robert Livingston, Louisiana, and his Senate counterpart, Mark Hatfield, Oregon, fought last year against riders and repeated their efforts this year.
Washington report
Robert Livingston (R -La.), who has consistently opposed arts funding bills, will probably head the Appropriations Committee; Sen.
Mood swings
Kierner uses Robert Livingston's career to trace his personal rise to prominence and wealth.
Traders and Gentlefolk: The Livingstons of New York, 1675-1790
Legal browser ?
Full browser ?
CITE
Site: Follow: Share:
Open / Close