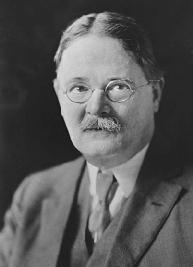 Roscoe Pound was one of the leading figures in twentieth-century legal thought. As a scholar, teacher, reformer, and dean of Harvard Law School, Pound strove to link law and society through his "sociological jurisprudence" and to improve the administration of the judicial system. In the early decades of the century, Pound was viewed as a radical thinker for arguing that the law is not static and must adapt to the needs of society. By the 1930s, however, he was seen as a more conservative figure, fighting the growth of federal government.

Pound was born on October 27, 1870, in Lincoln, Nebraska. The son of a judge, Pound attended the University of Nebraska, earning a bachelor of arts degree in botany in 1888. His father convinced him to attend Harvard Law School, but he stayed only one year. The death of his father led Pound to return to Lincoln, where he passed the Nebraska bar examination and was admitted to the bar in 1890.

From 1890 to 1903, Pound practiced law, taught at the University of Nebraska, earned a doctorate in botany from the university, and served as the director of the state botanical survey. In addition, he helped organize the Nebraska Bar Association in 1900.

A gifted scholar, Pound could have had a distinguished career in the sciences, but his appointment in 1901 as a commissioner of appeals for the Nebraska Supreme Court permanently shifted his career to the law. As a commissioner he acted as a temporary appellate judge, helping to reduce a backlog of cases. His opinions emphasized substance over procedure and reflected a concern with the practical effect of the law.

In 1903 he was appointed dean of the Nebraska College of Law. His academic interests merged with his experience as a court commissioner in 1906 when he addressed the annual convention of the American Bar Association in St. Paul. His speech, titled "The Causes of Popular Dissatisfaction with the Administration of Justice," was a call to improve court administration and a preview of his theory of law, called sociological Jurisprudence. The speech, which has remained a classic statement on Judicial Administration, attracted the attention of John Henry Wigmore, the dean of Northwestern University School of Law. He asked Pound to join his faculty in 1907. Pound's two-year association with the school was marked by his organization of the First National Conference on Criminal Law and Criminology, which gathered participants from many professions to discuss ways to reform the criminal law. The conference was one of the first of Pound's efforts to give practical application to sociological jurisprudence.

"The law must be stable, but it must not stand still."
—Roscoe Pound

In 1910, after having spent a year at the University of Chicago, Pound joined the faculty at Harvard Law School. He was appointed dean in 1916 and served until 1936. It was during this period that Pound's views and influence were at their zenith. Pound's contribution to U.S. jurisprudence was to further the work that oliver wendell holmes jr. had begun in debunking the legal theories that had dominated during the nineteenth century. Pound fought the notion that an unchanging and inflexible Natural Law formed the basis for the Common Law. He did believe that some constant principles existed in the common law, particularly ones dealing with methods, to which he gave the name "taught legal tradition." Pound firmly believed that the implementation of the principles of the taught legal tradition by wise common-law judges resulted in substantive change, which reflected changes in society. As the interpreters of the common law, judges had a special duty to consider the practical effects of their decisions and to strive to ensure that judging facilitated rather than hindered societal growth.

Pound placed his sociological jurisprudence in opposition to what he termed "mechanical jurisprudence," which he characterized as a common but odious practice whereby judges woodenly applied precedent to the facts of cases without regard to the consequences. For Pound, the logic of previous precedent alone would not solve jurisprudential problems.

Despite his desire to see the law adapt to the needs of society, Pound believed that the common law should develop slowly and that it should only follow changes in society. Certainty in the law, especially in areas such as commercial and Property Law, was often more beneficial than attempts at practical alteration. He revealed a more conservative cast of mind in his distrust of legislative statutes, arguing that the slow development of judge-made law was preferable to the radical changes often brought by legislation. His study of biology led him to believe that the law, like nature, was a seamless web and that changes in one part might produce totally unexpected and undesirable results in a distant part.

Pound's sociological jurisprudence fell out of favor in the 1930s, when the Legal Realism movement attacked his philosophy. Though the legal realists and Pound had much in common, the realists, especially jerome n. frank, differed over the nature of judicial decision making. Where Pound believed that judges, with the objective application of his principles of sociological jurisprudence, could logically produce the result in a given case, Frank, in his book Law and the Modern Mind (1933), thought otherwise. Frank maintained that not logic but the unique psychological makeup of judges was the most important factor in the resolution of a lawsuit. The realists pointed out, after analyzing many court decisions, that often a judge could support a decision for either side on a given legal issue. Therefore, they argued, judges were forced to decide cases on the basis of their subjective feelings of what was "fair" and then turn to the applicable part of the case law to furnish legal fig leaves to hide what they had actually done.

Pound reacted angrily to this analysis in a series of law review articles. He believed that the rules of law, especially rules of commercial law and property, could be determined with certainty and even attain the logical coherence of propositions of Euclid. Pound conceded that it was important to study the psychology of judging, but only to prevent the aberrations the realists claimed were common. Pound thought that the realists emphasized the oddities, and not the central factors, in their analysis of the judicial system. He disliked the realists for discounting the importance of the common law and for their willingness to advocate that the law be used to change society. For Pound, the legal system worked best when the law followed society. Any attempt to make society follow the law was futile.

Pound resigned as dean of the Harvard Law School in 1936. He was appointed the first university professor of Harvard in 1937, an appointment that permitted him to teach in any of the academic units of Harvard. An opponent of much of President franklin d. roosevelt's New Deal legislation, Pound was actively involved in attempts to stop the great expansion of federal administrative agencies. He continued writing during his later years, publishing his monumental five-volume Jurisprudence in 1959. He died on July 1, 1964, in Cambridge, Massachusetts, at the age of ninety-three.

Feedback
Flashcards & Bookmarks ?
Please log in or register to use Flashcards and Bookmarks. You can also log in with
Flashcards ?
My bookmarks ?
+ Add current page to bookmarks
Mentioned in ?
References in periodicals archive ?
When Attorney Sorg mentions "the so-called 'judicial modernization"' in New Hampshire, he is referring to our state's experience with a national court reform movement led before World War II by Dean Roscoe Pound of Harvard, President and Chief Justice William Howard Taft and American Bar Association President Arthur Vanderbilt.
Impeachment a tale of eroding checks, balances
Posner has long been identified with the Legal Realist or pragmatic school of thought, one dating to the 1920s and 1930s, represented by jurists such as Benjamin Cardoza, Roscoe Pound, and Felix Cohen.
Posner, Richard A. The Federal Judiciary: Strengths and Weaknesses
The eminent legal scholar Roscoe Pound famously said in a 1906 speech to the American Bar Association that "[d]issatisfaction with the administration of justice is as old as law." (5) "[A]s long as there have been laws and lawyers," Pound said, "conscientious and well-meaning men have believed that laws were mere arbitrary technicalities, and that the attempt to regulate the relations of mankind in accordance with them resulted largely in injustice." (6) Pound went on in his seminal--and at the time controversial--speech to detail the reasons for this persistent and insidious misperception of the law and to offer his recommendations for countering it.
The Ohio Modern Courts Amendment: 45 years of progress
It was Drinan's belief in what Dean Roscoe Pound had earlier called the "harmonization" of interests that in Schroth's view led Drinan "to tolerate legalized abortion, as an action that many Catholics deplore but that the society at large demands."
The bold acts of a priest in Congress
It stopped happening at the end of the nineteenth century because Roscoe Pound and the Left noticed that judges, who by nature are conservative, used the approach to keep things as they were, and attacked it.
Being honest about being honest agents
Harvard Law School dean Roscoe Pound vacationed in Germany throughout the 1930s.
The Third Reich in the Ivory Tower: Complicity and Conflict on American Campuses
of Nebraska, Lincoln law and psychology program; the habeas corpus hearing of Ponca Chief Standing Bear; Wounded Knee; and the life and work of Nathan Roscoe Pound.
The history of Nebraska law
While at Harvard, he was the winner of the Scott Club Prize, the Roscoe Pound Prize, and the Sheldon Prize, and was selected 1953 Graduate School Commencement Orator.
James S. Gratton, 83
Some, like Catherine Crystal Eastman and Roscoe Pound, were true cosmopolitans and intellectuals--although she was a radical and he a moderate reformer turned conservative.
Patriots and Cosmopolitans: Hidden Histories of American Law
He has also served as chair of ATLA PAC, cochair of the ATLA Endowment Campaign Committee, cochair of the ATLA's List Committee, president of the Roscoe Pound Institute (1999-2001), and cochair of the Public Affairs Committee.
A fund to protect the civil justice system
Two richly drawn narratives that illuminate our legal, political, and social legacy are: a brilliant short treatise on The Development of Constitutional Guarantees of Liberty, by Roscoe Pound (Yale University Press, 1957); and Habits of the Heart: Individualism and Commitment in American Life by Robert N.
Books to the Rescue: Understanding the Goals and Weapons of Terrorism
Roscoe Pound and Sociological Jurisprudence in Canada D.
Canada's "newer constitutional law" and the idea of constitutional rights