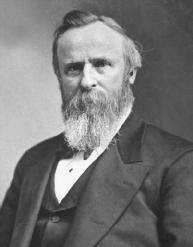 Rutherford Birchard Hayes was a respected and successful lawyer in his home state of Ohio. He achieved further success while serving in the Union Army during the U.S. Civil War, and he went on to gain prominence as a politician from Ohio. His service as governor of Ohio and as a member of the U.S. House of Representatives led to his election as the nineteenth president of the United States.

Hayes was born October 4, 1822, in Delaware, Ohio. His father, Rutherford Hayes, died before Hayes was born and Hayes was raised by his mother, Sophia Birchard Hayes, with the help of his uncle, Sardis Birchard, a bachelor. Hayes was enrolled at Norwalk Academy, a Methodist school in Ohio, in the spring of 1836. The next year he joined Isaac Webb's Preparatory School, in Middletown, Connecticut, where Sardis aided with his tuition. In 1838 Hayes enrolled at Kenyon College, in Gambier, Ohio. He graduated first in his class in August 1842 and delivered the valedictory address. After graduating he studied French and German on his own.

He went on to Harvard Law School in 1843 and was later admitted to the Ohio bar. He began practicing law in Lower Sandusky (now Fremont), Ohio, as a partner of Ralph P. Buckland, a leading legal figure in the town. He assumed an active role in politics in 1848 when he worked to elect Zachary Taylor, the Whig candidate for president. In 1849 he established a law office in Cincinnati, and eventually he became a prominent attorney in the city. In 1852 he was chosen to examine candidates for admission to the Ohio bar. Later that year he married Lucy Webb, whom he had known for nearly eight years.

Hayes developed into a leading and somewhat radical figure in Ohio politics. Like many Republicans he opposed Slavery but saw no need to punish the South. He chose other avenues in the fight to end slavery, offering his services to the Underground Railroad, which helped Southern slaves escape to freedom in the North. In 1853 he defended a number of escaped slaves in court. He went on to form a well-known Cincinnati law firm, Corwine, Hayes, and Rogers.

In the 1860 presidential campaign, he worked for the election of Abraham Lincoln, but with no great enthusiasm. After Lincoln's election at the beginning of the Civil War, Hayes wrote in his diary, "Six states have 'seceded.' Let them go." Nevertheless, when the war broke out, Hayes became active in the Union's military effort to unify the nation. In 1862 he was promoted to full colonel and given command of the Twenty-third Ohio Regiment. Hayes was wounded four times, once seriously, during the war. His composure in battle gained him the respect of those who served under him.

Hayes's popularity helped his political career. On October 19, 1864, he was elected to the U.S. House of Representatives for the Second Congressional District of Ohio. He was reelected in 1866. In 1867 the Ohio Republican Party nominated Hayes as its candidate for governor. He gained considerable support from Radical Republicans who, like Hayes, opposed President Andrew Johnson's vetoes of legislation calling for Military Government in the South. On January 13, 1868, Hayes was inaugurated as governor of Ohio. He was reelected governor in 1870 and again in 1875.

Hayes favored a sound fiscal policy with regard to the use of public money, and he opposed public funds for Catholic schools. These issues struck a chord with Republicans throughout the United States, who sought to extend his fiscal policies to the federal level. He received the Republican nomination for president in 1876, to run against samuel j. tilden of New York.

Even before election results were in, Hayes wrote in his diary that he feared a contested election and perhaps even an armed conflict because of it. He apparently anticipated the most complicated election in the nation's history. On November 7, 1880, election results showed that Tilden had won 4.300 million popular votes to Hayes's 4.036 million, giving Tilden 184 electoral votes (one short of the needed majority) and Hayes 166.

A congressional election committee was designated to determine the winner of the election. After months of deliberation, Republicans managed to sway the committee by filling it with Republican loyalists. On March 2, 1877, Congress declared Hayes and his vice presidential candidate, William Almon Wheeler, of New York, the winners of the 1876 election.

In his inaugural address, Hayes stressed the importance of settling the problems left by Union occupation of Southern states. In April 1877 he ordered federal troops out of South Carolina and New Orleans. The era of the Reconstruction of the South initiated by former president ulysses s. grant was over.

During Hayes's administration he renewed the economic policy of satisfying the public debt with government currency, and he opposed measures passed by Congress to freely coin silver. Hayes reformed the process for appointing civil servants. He also signed legislation permitting women to practice law before the Supreme Court.

Hayes refused to run for reelection in 1880, and retired from politics. However, he continued to contribute to the landscape of American life. In 1882 he became the first president of the Slater Fund, founded to aid African American education programs in the South. He later gave a scholarship to a promising young man, w. e. b. du bois, who went on to attend Fisk and Harvard Universities and ultimately became a leading figure in the National Association for the Advancement of Colored People (NAACP). In 1883 Hayes became the first president of the National Prison Reform Association, a post he held for nearly ten years. Hayes was also a trustee of Ohio Wesleyan and Ohio State Universities.

"Politics and law are merely results, merely the expression of what the people wish."
—Rutherford B. Hayes

On January 14, 1893, Hayes suffered severe chest pain while in Cleveland on business for Western Reserve and Ohio State Universities. His son Webb C. Hayes accompanied him to Speigel Grove, in Fremont, Ohio, where his wife had been buried three years earlier. On January 17 Hayes died, at the age of seventy.

Barnard, Harry. 1954. Rutherford B. Hayes and His America. Indianapolis: Bobbs-Merrill.

Morris, Roy. 2003. Fraud of the Century: Rutherford B. Hayes, Samuel Tilden, and the Stolen Election of 1876. New York: Simon & Schuster.

Feedback
Flashcards & Bookmarks ?
Please log in or register to use Flashcards and Bookmarks. You can also log in with
Flashcards ?
My bookmarks ?
+ Add current page to bookmarks
References in periodicals archive ?
To help students understand that the election uproar has a parallel in history, In 1876, a similarly close election--also involving disputed ballots from Florida--gave victory to Republican Rutherford B. Hayes, even though he trailed Democrat Samuel J.
The Battle of the Ballots
When George Curtis, the editor of Harper's Weekly and a friend of the president, proposed a resolution stating that "the lawful title of Rutherford B. Hayes to the presidency is as clear and perfect as that of George Washington," the group voted by a resounding majority to reject it.
Congressional relations and "public relations": in the administration of Rutherford B. Hayes
Rutherford B. Hayes was inaugurated president of the United States.
1877: Exploration and settlement; wars; government; civil rights; statistics
This article examines the question of the presidency of Rutherford B. Hayes of Ohio, who won office in 1876 in much the same fashion as did Bush in 2000, that is, with fewer popular votes than his Democratic opponent.
Rutherford B. Hayes and the politics of discord
FRAUD OF THE CENTURY: Rutherford B. Hayes, Samuel Tilden, and the Stolen Election of 1876 by Roy Morris Jr.
Hayes's ride: in 1876, a Democratic candidate won the presidency, but, through a lack of nerve lost the recount. Sound familiar?
When that effort failed and the Republicans nominated Ohio governor Rutherford B. Hayes, Blaine seemed to lose interest in the amendment.
The Blaine game: supporters of government aid to religious schools are trying to eliminate state constitutional provisions that stand in their way
Tilden (D) 50.97%, 184 electoral votes Winner: Rutherford B. Hayes (R) 47.95%, 185 electoral votes
INTO OVERTIME
Election returns showed Tilden ahead of his Republican rival, Rutherford B. Hayes, by more than 194,000 popular votes.
The Electoral College
Tilden and Republican Rutherford B. Hayes occurred at a precarious time.
Documents Related to the Disputed General Election of 1876
Harry Barnard has written Rutherford B. Hayes and His America (1954).
Hayes, Rutherford B(irchard) (1822-1893)
In Washington, officials began to see that many of the church and missionary agents were no improvement over government agents prior to Grant's administration, so officials in the administration of Rutherford B. Hayes killed the policy, without addressing the constitutional issue.
`Faith-Based' Social Services: For Native Americans, It Was A Trail Of Tears
Another fascinating tidbit was her determination to acquire the Rutherford B. Hayes desk, that her husband used during his tenure in the Oval Office.
AMERICA'S QUEEN: A Life of Jaqueline Kennedy Onassis
Legal browser ?
Full browser ?
CITE
Site: Follow: Share:
Open / Close