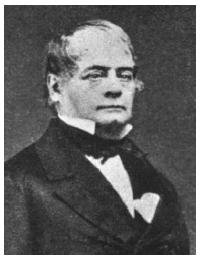 Samuel Ames was born September 6, 1806. He graduated from Brown University in 1823 and was admitted to the Rhode Island bar in 1826.

From 1841 to 1851 Ames represented Providence in the Rhode Island general assembly. During his tenure, he was a prominent supporter of state authority in the "Dorr Rebellion." This insurrection occurred in 1842 as a protest against the limited voting rights that existed in Rhode Island. The protest resulted in a more liberal interpretation of the right to suffrage. "It is difficult to draw and apply the precise line separating the different powers of government."
—Samuel Ames

Beginning in 1856 Ames served as chief justice of the Rhode Island Supreme Court. In 1861, he was the representative from Rhode Island during a series of unsuccessful negotiations to effect a peace between the North and South during the Civil War. Ames died December 20, 1865, in Providence, Rhode Island.

Feedback
Flashcards & Bookmarks ?
Please log in or register to use Flashcards and Bookmarks. You can also log in with
Flashcards ?
My bookmarks ?
+ Add current page to bookmarks
References in periodicals archive ?
"It also helps that the unit makes sure that we are fully prepared for whatever the mission requires," added Samuel Ames, another of the 599th's civilian traffic-management specialists.
PACOM's movement masters
The leading American treatise on corporation law before Cook was that of Joseph Angell and Samuel Ames, which had gone through eleven editions from 1832 to 1882.(19) Its plan of organization was very similar to that of a 1793 treatise published in London by Stewart Kyd.(20) Although Kyd purported to include joint stock companies, most of his text and citations related to nonprofit corporations that had neither stock nor stockholders.
ANGELL & SAMUEL AMES, TREATISE ON THE LAW OF PRIVATE CORPORATIONS AGGREGATE (1st 1832, 6th ed.
A Treatise on the Law of Stock and Stockholders, as Applicable to Railroad, Banking, Insurance, Manufacturing, Commercial, Business, Turnpike, Bridge, Canal, and Other Private Corporations
Legal browser ?
Full browser ?
CITE
Site: Follow: Share:
Open / Close