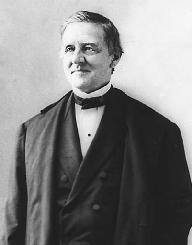 Samuel Jones Tilden was a New York lawyer, political reformer, governor, and Democratic candidate for president in the famous disputed election of 1876. Tilden's acceptance of his defeat in the election may have prevented civil unrest.

Tilden was born on February 9, 1814, in New Lebanon, New York. He attended Yale University and studied law at New York University before being admitted to the New York bar in 1841. Although Tilden suffered frequent illnesses during his life, he soon became a successful corporate attorney, representing powerful railroad and business entities.

In the 1840s Tilden became active in New York Democratic Party politics. He served in the New York Assembly in 1846 and was a member of the state constitutional conventions in 1846 and 1847. Opposed to Slavery, he actively supported the Union during the U.S. Civil War.

In 1868 Tilden began his rise to political prominence. He presided over the New York State Democratic Committee and led a reform movement that collected evidence and prosecuted the notorious Tweed Ring, the corrupt Democratic political machine that controlled and defrauded New York City. Tilden's reforms led to his election as governor of New York in 1874. He continued to enhance his reputation as reformer when he exposed the Canal Ring, a conspiracy of politicians and contractors who had defrauded the state of money intended to pay for the construction of canals.

"New York [cannot] remain the center of commerce and capital for this continent, unless it has an independent bar and an honest judiciary."
—Samuel J. Tilden

In 1876, as a result of his accomplishments in New York, Tilden won the Democratic nomination for president and ran against the Republican candidate rutherford b. hayes. The campaign was close and heated. Tilden won a majority of the popular votes, and preliminary returns showed that he had 184 of the 185 electoral votes needed to win. Hayes had 165 electoral votes. The electoral votes for Florida, Louisiana, and South Carolina, however, were in dispute, and the status of one of Oregon's three electors also was in question. Republicans quickly calculated that if Hayes received every one of the disputed votes, he would win the presidency by a vote of 185 to 184.

Congress was charged under the Constitution with resolving the electoral claims. It created an electoral commission, composed of five members from the House of Representatives, four from the Senate, and five justices from the Supreme Court. The legislative membership was evenly divided between Democratic and Republican members. The commission voted to award all the disputed votes to Hayes. Tilden, who had shown no leadership during this crisis and had made no effort to marshal support, acquiesced, fearing that any further efforts to fight the result would lead to violence. Southern Democrats also went along with the commission's result in exchange for the withdrawal of federal troops from the South and the end of Reconstruction. Hayes removed the troops by the end of April 1877.

After his defeat, Tilden retained influence in the Democratic party. He was considered for the party's presidential nomination in 1880 and 1884, but he declined the opportunity on both occasions.

Tilden died on August 4, 1886, in Yonkers, New York. A wealthy man, Tilden left the bulk of his estate in trust for the establishment of a free public library for New York City. This bequest eventually was used to help build the New York City Library in Manhattan.