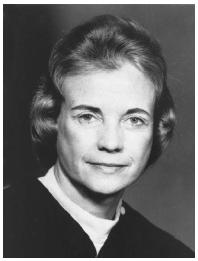 Feedback
Flashcards & Bookmarks ?
Please log in or register to use Flashcards and Bookmarks. You can also log in with
Flashcards ?
My bookmarks ?
+ Add current page to bookmarks
Mentioned in ?
References in periodicals archive ?
Though she never engaged in "fights she deemed unnecessary," Sandra Day O'Connor was competitive, methodical, and fierce when it came to the important ones.
First: Sandra Day O'Connor
Sandra Day O'Connors words reflect a severe loss to our country of compassion and equal treatment to all, which was the law of our land before abortion was foisted upon us by the Supreme Court.
Abortion's collision course with science
Sandra Day was the first ever female judge to serve on the Supreme Court, with Ruth Bader Ginsberg appointed to the post on 10 August, 1993, by former President Bill Clinton.
New series on first ever female US Supreme Court justices under development
This combination photo shows retired Supreme Court Justice Sandra Day O'Connor accepting the Minerva Award during the Women's Conference in Long Beach, Calif.
TV drama about high court's Ginsburg, O'Connor in the works
The celebration included an early evening reception complete with tours of the recently opened Beus Center for Law and Society, home to the Sandra Day O'Connor College of Law and the Nussbaum Gillis & Dinner Interview Room.
Nussbaum Gillis & Dinner Funds Financial Needs Scholarship Sandra Day O'Connor College of Law, Arizona State University
Humetewa received her Juris Doctor degree in 1993 from ASU's Sandra Day O'Connor College of Law and her bachelor's degree from ASU in 1987.
Diane Humetewa named first American Indian woman federal judge
Caption: FLORIDA SUPREME COURT Justice Fred Lewis, left, and Annette Boyd Pitts, executive director of the Florida Law Related Education Association, have won the National Center for State Court's Sandra Day O'Connor Award for the Advancement of Civics Education for their joint work on Florida's Justice Teaching program and several other civics education initiatives in which they have been involved.
Florida Supreme Court
The following is an adaptation of her remarks at the DirectWomen Sandra Day O'Connor Board Excellence Award program held on June 13, 2013, in New York.
'The work of DirectWomen is more important than ever'
Bollinger," Justice Sandra Day O'Connor opined, "That 25 years from now, the use of racial preferences will no longer be necessary to further the interest approved today" (2003, p.
Affirmative Action on the Docket. Commentary
Terry Dodge is to share a stage in October with former Supreme Court Justice Sandra Day O'Conner, media mogul Oprah Winfrey, and two other women as they receive Minerva Awards.
Terry Dodge
Stella is survived by her husband Arthur "Bud" Aldrich; three sons: John Podkowka and his wife Barbara Lou, Gerald Podkowka and his wife Sandra, and Jack Podkowka and his wife Gail all of Ware; her four stepchildren: Gail Walker and her husband Robert of Westborough, Richard Aldrich of Brimfield, Sandra Day and her husband Dennis of Millbury, and Bruce Aldrich and Tina Senecal of Ware; her sister, Margaret Milanese of Brimfield.
Stella L. Aldrich 1927 - 2010
Other counsellors chosen to join the Executive Council were former judge of the US Supreme Court Sandra Day O'Connor and German judge at the International Court of Justice at The Hague Bruno Simma.
Cypriot appointed to US law council