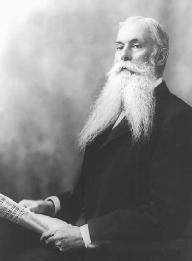 Sanford Ballard Dole was a prominent figure in the creation of Hawaii as a republic and its annexation to the United States. Dole was born in 1844. His parents were American missionaries assigned to Hawaii, and Dole was raised and educated there. After attending Williams College and his admission to the Massachusetts bar in 1868, he settled in Hawaii and began his law practice.

In 1884 and 1886, he served in the Hawaiian legislature. His first act of dissension against the existing monarchy was as a leader of the Bayonet Revolution in 1887. As a result, the power of the monarchy was reduced and a more equitable constitution was adopted.

Also in 1887, Dole sat on the bench of the Hawaii Supreme Court as an associate justice.

In 1893, Queen Liliuokalani refused to recognize the limitations imposed upon her by the 1887 constitution. An insurrection occurred and the queen was overthrown. Dole left his post as justice to become the leader of the revolutionary provisional government that replaced the monarchy.

The republic of Hawaii was created in 1894, and Dole acted as its president. He began his efforts for the U.S. annexation of Hawaii, but his first attempts were thwarted by President grover cleveland, who opposed the deposition of the monarchy. Dole wrote a treatise defending the revolution and its results but to no avail. He was finally able to achieve annexation under the administration of President William McKinley in 1898. Dole continued to serve as president throughout these years.

With the annexation of Hawaii completed, Dole became the first governor of the newly formed Territory of Hawaii. He performed these duties from 1900 to 1903.