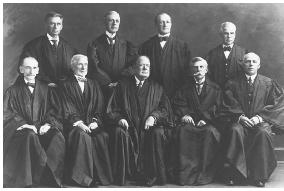 Feedback
Flashcards & Bookmarks ?
Please log in or register to use Flashcards and Bookmarks. You can also log in with
Flashcards ?
My bookmarks ?
+ Add current page to bookmarks
TheFreeDictionary presents:
Write what you mean clearly and correctly.
References in periodicals archive ?
(20) That test allowed courts to assess whether speech posed "a clear and present danger that [it] will bring about the substantive evils that Congress has a right to prevent." (21) First announced in Schenck v. United States, the Court used it for decades to assess whether seditious advocacy or other "dangerous" speech was subject to criminal punishment, or protected expression under the First Amendment.
Eternally Vigilant: Free Speech in the Modern Era
In Schenck v. United States (1919), the Supreme Court ruled that a group of socialists could be imprisoned, First Amendment notwithstanding, for dispensing antiwar circulars to men heading for military service.
Free Speech in its Forgotten Years
Legal browser ?
Full browser ?
CITE
Site: Follow: Share:
Open / Close