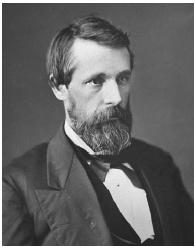 Stanford was born on March 9, 1824, in Watervliet, New York. He was one of eight children born to Josiah Stanford and Elizabeth Phillips Stanford. His father was a prominent farmer and a prosperous merchant, who supplied building materials for the town's public works projects. Growing up, Stanford worked on the family farm and helped his father with local road and bridge construction. His boyhood work on the local transportation infrastructure sparked an interest that would fuel his life's work.

"A man will never construct anything he cannot imagine."
—Lelandm Stanford

Stanford's early education included attendance at the local public school and some home schooling. At eighteen, he enrolled at the Clinton Liberal Institute, in Clinton, New York. He completed his education at New York's Cazenovia Seminary. At twenty-one, he began clerking with the law firm of Wheaton, Doolittle, and Hadley, in Albany, New York. Three years later, in 1845, Stanford was admitted to the bar. Like many young men of his era, Stanford saw tremendous opportunity for those who moved west. In 1848 he settled in Port Washington, Wisconsin, to establish a law practice. While Stanford was establishing his professional career in Wisconsin, several of his brothers headed to California, eager to apply their skills as merchants in its mining camps and growing towns.

In the spring of 1852, Stanford sent his wife, Jane Elizabeth Lathrop Stanford, to stay with her family in Albany, and he followed his brothers to the Pacific Coast. By all accounts, Stanford arrived in California with little or no money. His brothers provided him with a stock of miners' supplies and set him up as a merchant in a mining town. His business there was very successful. Popular with the miners and trained in the law, Stanford was often called upon to mediate claim disputes and other problems.

Convinced that his future was in California, Stanford persuaded his wife to join him there. In 1856 they established a home in Sacramento. Stanford continued to be involved with his brothers and their business interests, but he devoted most of his time—unsuccessfully—to politics.

He ran as a Republican candidate for state treasurer in 1857 and for governor in 1859. He was defeated in both races, but the campaigns made him a well-known political figure throughout the state. Finally, in 1861, when the outbreak of the U.S. Civil War split the state Democratic Party, Stanford was successful in a bid for the governor's seat.

As the state's first Republican governor, he faced two immediate challenges: the possibility that California would split from the Union, and a serious flooding of the Sacramento River (which was so extensive that Stanford had to crawl out the window of his home and row himself to his inauguration). Stanford held California safely in the Union, and he coped with the damage caused by the flood. After providing for flood victims, and promoting minor administrative and legislative reforms, Stanford spent much of his time as governor pursuing his interest in railroads as a growing industry.

Just before the Civil War, President Abraham Lincoln signed the Pacific Railroad Act, authorizing the construction of a transcontinental railroad from Omaha to Sacramento. Despite the coming war, investors and entrepreneurs across the United States looked for ways to participate in, and profit from, the new venture.

Prior to his election as governor, Stanford and three other Sacramento merchants—Crocker, Hopkins, and Huntington—had financed railroad feasibility surveys and had organized the Central Pacific Rail Road Company on June 28, 1861. Stanford was named president.

During his two-year term as governor, Stanford committed a substantial amount of public money to the construction of the Central Pacific Rail Road. Any apprehensions Stanford may have had about mingling his official actions with his private interests were overshadowed by his conviction that a rail connection with the East would benefit all citizens of California.

When his term as governor expired, Stanford left government to construct his railroad. On January 8, 1863, workers from the Central Pacific Rail Road Company began laying track at Front and K Streets in Sacramento—one year before the Union Pacific started work in the East. Six years later, on May 10, 1869, Stanford drove a gold spike in the final section of track at Promontory Point, Utah. The Central Pacific Rail Road united the West with the rest of the country, and secured Stanford's place in railroad history.

Though no public accounting has ever been made of the profits Stanford and his partners drew from the construction of the Central Pacific and Southern Pacific Rail Roads, it is known that the enterprise made them all enormously wealthy. Stanford lived in grand style in Sacramento, and later in San Francisco. He also owned Palo Alto, a ranch in Tehama County, where he cultivated vineyards and bred racing stock. Stanford's horse-training methods were widely adopted, and his interest in how horses moved at high speeds prompted him to sponsor early experiments in motion picture photography.

Today, the Palo Alto ranch is the site of Stanford University, a memorial to Stanford's only child. Leland Stanford Jr. died in 1884, at the age of fifteen, while touring in Italy. He had been his father's pride and joy. Stanford had placed him on an elaborate silver tray and presented him to guests at a party shortly after his birth in 1869. The tray can still be seen at the Leland Stanford House in Sacramento.

Devastated by the death of his son and looking for a new challenge, Stanford allowed himself to be drafted by the Republican Party as a candidate for the U.S. Senate. He was elected in 1885. It is generally conceded that Stanford was not suited to life as a senator. He was often absent and showed little enthusiasm for the work. His election also caused friction with his long-time business partners, who had supported another candidate. In spite of his poor performance—and poor health—he was reelected in 1891, and served until his death two years later.

The five-foot eleven-inch, 268-pound railroad giant succumbed to heart problems at his Palo Alto ranch on June 21, 1893. Upon his death, the bulk of his estate passed to his wife, who used it to support the university founded by Stanford and named for their son. Stanford is interred with his son and his wife in the family mausoleum on the Stanford University campus.

Lewis, Oscar. 1938. The Big Four: The Story of Huntington, Stanford, Hopkins, and Crocker, and of the Building of the Central Pacific. Reprint, 1981, New York: Arno Press.