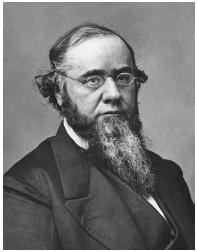 Edwin McMasters Stanton served as U.S. attorney general from December 1860 to March 1861, at a time when the southern states were moving toward secession from the Union. He later served as secretary of war during the U.S. Civil War under President Abraham Lincoln and was a key figure in the events that led to the Impeachment of President Andrew Johnson.

Stanton was born on December 19, 1814, in Steubenville, Ohio. He attended Kenyon College and studied law. He was admitted to the Ohio bar in 1836 and began his law practice in Cadiz, Ohio. From 1837 to 1839, Stanton was a county prosecutor. In 1842 he was elected reporter of the decisions of the Ohio Supreme Court. In 1847 Stanton moved to Pittsburgh, Pennsylvania, where he established a successful law practice.

A skilled trial and appellate advocate, Stanton soon established a specialty in litigating federal law issues. In 1856 he relocated to Washington, D.C., where he argued several important cases before the U.S. Supreme Court. In 1858 he successfully defended the state of California in land Fraud cases involving Mexican land acquired by the United States.

President James Buchanan asked Stanton to serve as attorney general in late 1860, as Buchanan's term drew to a close. Southern politicians, worried that the next president, Abraham Lincoln, would implement antislavery measures, discussed secession from the Union. Stanton was a Democrat but he opposed Slavery. He counseled Buchanan not to abandon Fort Sumter, a fortification in the harbor of Charleston, South Carolina, that was held by Union forces. Stanton also secretly advised Republican leaders of cabinet discussions involving secession.

In 1862 President Lincoln appointed Stanton secretary of war. During the remainder of the Civil War, Stanton proved to be an effective administrator, minimizing corruption and increasing the efficiency of the military by ensuring that the necessary supplies and troops were available. He continually argued for a more aggressive prosecution of the war, a position that provoked violent quarrels with military commanders.

After the assassination of Lincoln in April 1865, Stanton played a leading role in the investigation and prosecution of the conspirators. Lincoln's successor, Andrew Johnson, retained Stanton as secretary of war, but they soon clashed over Johnson's Reconstruction program for the South. Stanton sought stricter policies against the South and worked with the Radical Republicans in Congress, who were Johnson's bitterest enemies, to achieve his aims.

In 1867 Johnson asked Stanton to resign because of this betrayal, but Stanton refused. He defended his actions under the Tenure of Office Act (14 Stat. 430), which prohibited the removal of any federal official without senatorial consent when the official's appointment had originally been approved by the Senate. The Radical Republicans had passed this act in 1867 over Johnson's Veto as a way of preventing the president from removing officials opposed to his Reconstruction policies.

Johnson ignored the Tenure of Office Act and appointed Lorenzo Thomas secretary of war. Johnson's action led to his impeachment by the House of Representatives, but the Senate acquitted him by one vote in 1868. After the acquittal Stanton finally resigned his cabinet post.

Stanton returned to private practice but his health was failing. In 1869 President ulysses s. grant appointed Stanton to the U.S. Supreme Court, but he died on December 24, 1869, in Washington, D.C., before he could assume the position.