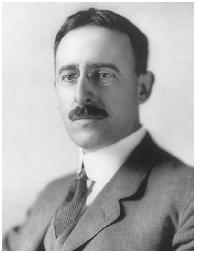 Henry Lewis Stimson was a lawyer and a distinguished public servant, occupying key posts in the administrations of five presidents between 1911 and 1945. As Secretary of State, he sought disarmament, while as secretary of war he advocated the use of the atomic bomb against Japan in World War II.

In 1906 President Theodore Roosevelt appointed Stimson U.S. attorney for the Southern District of New York. He left the post in 1909 to run as the Republican nominee for governor of New York. Although he lost the 1910 election, his stock continued to rise. President William Howard Taft named Stimson secretary of war in 1911, a position he held until the end of the Taft administration in 1913. He then returned to his New York law practice.

"The bombs dropped on Hiroshima and Nagasaki ended the war. They also made it wholly clear that we must never have another war."
—Henry L. Stimson

Stimson did not reenter public service until 1927, when President Calvin Coolidge named him governor of the Philippine Islands. In 1929 President herbert hoover elevated Stimson to secretary of state, a position that put him on the world stage. As secretary, Stimson sought to continue the policy of military disarmament, participating in the London Naval Conference of 1930. Following the Japanese invasion of Manchuria in 1931, Stimson wrote a diplomatic note to both China and Japan, informing them that the United States would not recognize territorial or other changes made in violation of U.S. treaty rights. The "Stimson Doctrine" was invoked as the rationale for successive economic embargoes against Japan during the 1930s.

With the election of President franklin d. roosevelt, a Democrat, in 1932, Stimson returned to his law practice and private life. By the end of the 1930s, however, with the growing belligerence of Germany and Japan, Stimson emerged as an opponent of U.S. isolationist policies. When World War II began in 1939, Stimson became a leading member of the Committee to Defend America by Aiding the Allies, urging the U.S. government to provide aid to Great Britain and France.

President Roosevelt, who also sought to help the Allies, appointed Stimson secretary of war in 1940. By appointing a Republican to this key post, Roosevelt strengthened bipartisan support for his foreign policy. Stimson remained secretary of war during World War II and received praise for his quiet but firm administration of the war effort.

In 1945, acting as chief presidential adviser on atomic programs, Stimson directed the Manhattan Project, which resulted in the creation of the atomic bomb. He recommended to President Harry S. Truman that atomic bombs be dropped on Japanese cities of military importance. Truman followed his advice, ordering the bombing of Hiroshima and Nagasaki that brought a swift end to World War II. Stimson defended his recommendation, arguing that the bombings ended the war quickly and therefore saved more lives than were lost.

Stimson left office in September 1945. He published his autobiography, On Active Service in Peace and War, in 1948. He died on October 20, 1950, in Huntington, New York.