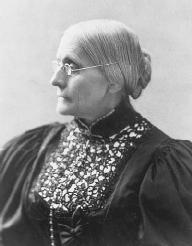 People no longer are surprised when an American woman works outside the home, keeps her own bank account, maintains custody of her children after a Divorce, or votes in a presidential election. Yet, not too long ago, these practices were uncommon, if not illegal, in the United States. Due in large part to the efforts of the remarkable Susan Brownell Anthony and other pioneers of feminism, women in the United States enjoy rights and opportunities that are simply taken for granted today.

Anthony was born in 1820, during an era when most women got married, produced children, and deferred completely to their husbands. Daniel Anthony, her father, belonged to the Society of Friends (better known as Quakers), a religious group that recognized the equality of men and women. Daniel encouraged his daughter to think independently and to speak her mind. He supported her educational pursuits and emphasized self-sufficiency.

Although Anthony's father was an admirable man and progressive for his time, her mother, Lucy Anthony, found little pleasure in her restricted, duty-bound life. She appeared overwhelmed by eight pregnancies and exhausted from running the household while keeping boarders and raising six surviving children. Historians believe that the withdrawn, careworn Lucy became a symbol to Anthony of the unfair burdens of marriage. The institution seemed weighted against women, even those with kind and liberal-minded husbands. Anthony concluded that marriage was necessary only when a strong emotional bond existed between two people. This view put her at odds with most women of her generation, who considered matrimony a requirement for social and economic security. True to her principles, Anthony—who once referred to marriage as Slavery and "a blot on civilization"—rejected several suitors' offers and remained single throughout her long life.

Anthony was an intelligent young girl who received the best education available at the time. Although she attended a well-regarded boarding school in Philadelphia, she did not enroll in college. In the 1830s, only one college in the United States, Ohio's Oberlin College, accepted women. Even with a college education, Anthony would have faced a limited number of employment opportunities. As a woman, her only options were to become a seamstress, a domestic, or a teacher. Anthony chose teaching and, in 1938, began the first of several teaching jobs. In 1846, she became headmistress at Canajoharie Academy in New York. There, she discovered that male teachers were paid $10.00 a week, whereas she received $2.50. Frustrated with the low pay and a lack of respect for her work, Anthony decided to devote her energies to social reform.

Although Anthony is best known for her fight for women's suffrage, she also crusaded for other causes. In 1852, Anthony became active in the Temperance Movement, a national campaign to ban the sale and consumption of alcohol. When it became clear that women were not allowed full leadership in the existing temperance organizations, Anthony helped form the Woman's State Temperance Society of New York.

Like her father, Anthony also was a fervent abolitionist. She became friends with Frederick Douglass and attended her father's anti-slavery meetings in the family home. Before and during the U.S. Civil War, Anthony devoted her organizational skills to the cause. As head of the Anti-Slavery Society of New York, she planned lecture schedules and spoke publicly against the evils of the Southern system and of the discriminatory practices in the North. During this time, she joined forces with another abolitionist, Elizabeth Cady Stanton, who was the acknowledged leader of the fledgling women's rights movement.

After the war, Anthony and Stanton continued to work together for social reform. They were bitterly disappointed when their fellow abolitionists refused to support their strategy for constitutionally mandating voting rights for women. A golden opportunity for female suffrage had arisen with the drafting of the Fifteenth Amendment to the U.S. Constitution. This amendment was necessary to grant voting rights to the former slaves who were liberated by President Abraham Lincoln's Emancipation Proclamation. However, the abolitionists supported the Fifteenth Amendment only to the extent that it gave African American males the right to vote. They were not concerned about the amendment's exclusion of women. With that defeat, Anthony focused her sights on a separate constitutional amendment to grant women the franchise.

In 1868, Anthony began publishing The Revolution, a weekly newsletter advocating suffrage and equal rights for women. In 1869, Anthony and Stanton formed the National Woman's Suffrage Association. An indefatigable worker, Anthony became a fixture on the lecture circuit and headed national petition drives to establish support for female voting rights.

In 1872, Anthony decided to test the legality of voting laws that allowed only white and African American males to go to the polls. She registered and voted in the 1872 presidential election in Rochester, New York. Anthony was prosecuted for the offense and fined $100, but she refused to pay. Her defiance rallied supporters of women's rights across the nation. In time, Anthony merged her suffrage organization with another one, to form the National American Woman Suffrage Association. She served as president of this association from 1892 to 1900.

Not surprisingly, Anthony fought hard for the liberalization of laws for married women. During most of the nineteenth century, a wife had very little protection under the law. Any income she produced automatically belonged to her husband, as did any inheritance she received. Her husband could apprentice their children without her permission and was designated sole guardian of their children, no matter how unfit he might be. A husband even had the right to pass on his guardianship of the children by will. In Anthony's home state of New York, her petition drives and lectures were instrumental in convincing the legislature to pass laws giving married women power over their incomes and guardianship of their children. Anthony was not afraid to flout social conventions to achieve her goals. For a time, she wore bloomers, a controversial garment named after Amelia Jenks Bloomer, the woman who popularized it. Bloomers were loose-fitting trousers gathered at the ankle and worn underneath a knee-length skirt. The costume was intended as a protest against the tight-fitting corsets and unwieldy petticoats popularly worn by women at the time. Although she withstood ridicule to make her point, Anthony stopped wearing bloomers when she concluded that they were diverting attention from the more serious issues facing women.

Anthony's message of equality often met resistance, and not just from men. Many women in the nineteenth century were frightened by or skeptical of change. In 1870, Anthony lamented their wariness when she wrote, "The fact is, women are in chains, and their servitude is all the more debasing because they do not realize it." She urged women to recognize the inequities they faced and to speak and act for their own freedom.

When Anthony died in 1906, women did not yet have the right to vote in presidential elections. When the Nineteenth Amendment to the U.S. Constitution finally became law in 1920, it was called the Anthony amendment in recognition of her valiant efforts to gain suffrage.

Anthony was also honored in 1979 and 1980, when the U.S. Mint issued one dollar coins bearing her likeness. She became the first woman to be pictured on a U.S. coin in general circulation.