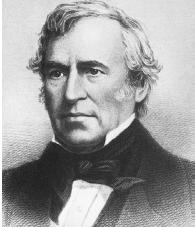 Zachary Taylor served as the twelfth president of the United States from 1849 until his death in 1850. A famous military general, Taylor was an apolitical leader who accomplished little during his sixteen months in office.

"Let us invoke a continuance of the same protecting care which has led us from small beginnings to the eminence we this day occupy … which shall acknowledge no limits but those of our own wide-spread Republic."
—Zachary Taylor

Taylor was born on November 24, 1784, in Orange County, Virginia, but moved as a child to Kentucky. He enlisted in the U.S. Army in 1808 and was commissioned as a first lieutenant in the infantry that same year. Taylor quickly emerged as a military hero during the War of 1812 while serving under General William Henry Harrison. He distinguished himself during the Black Hawk War in 1832 and the Second Seminole War in Florida between 1835 and 1842. He was promoted to brigadier general in 1837 after his victory at the Battle of Lake Okeechobee. In 1845, soon after the annexation of Texas, President james k. polk ordered Taylor and an army of four thousand men to the Rio Grande. Border hostilities with Mexico over the boundary between the two countries escalated into full battles in May of 1845. Taylor's troops defeated an invading Mexican army at the Battles of Palo Alto and Resaca de la Palma. That same month the United States declared war on Mexico.

Taylor and his army invaded Mexico and advanced to Monterrey, capturing the city in late September. His military career was put in doubt, however, when a letter became public in which Taylor criticized President Polk and his secretary of war, William L. Marcy. An angry Polk could not relieve the popular war hero of his command, but he stripped Taylor of his best troops and ordered him to adopt a defensive posture. Taylor, who was nicknamed "Old Rough and Ready," disobeyed Polk's orders and defeated a Mexican army that outnumbered his troops by four to one at the Battle of Buena Vista in February 1847. This stunning victory guaranteed Taylor the status of national hero.

The Whig Party nominated Taylor as its presidential candidate in 1848, even though Taylor had no interest in politics (he had never voted in an election) and was a slave owner. Taylor defeated the Democratic candidate, Lewis Cass, in the November general election.

Taylor's brief service as president was unremarkable. Having no political background, Taylor was unprepared for the give-and-take of Washington politics. The biggest issue facing him was statehood for California and New Mexico, which had been acquired from Mexico as a result of the war. Although he owned slaves, Taylor was opposed to the expansion of Slavery into the new territories, a position that alienated Southern Whigs and Democrats in Congress. When California voted to prohibit slavery, the South opposed its admission to the Union. Attempts by Senator Henry Clay of Kentucky to negotiate a compromise were rebuffed by Taylor.

As this political conflict unfolded in the summer of 1850, Taylor contracted cholera. He died on July 9, 1850, in Washington, D.C.

Taylor was succeeded by Vice President Millard Fillmore, who quickly agreed to resolve the Mexican territories issue with the Compromise of 1850. This act admitted California into the Union as a free state, gave the territories of Utah and New Mexico the right to determine the slavery issue for themselves at the time of their admission to the Union, outlawed the slave trade in the District of Columbia, and gave the federal government the right to return fugitive slaves in the fugitive slave act (9 Stat. 462).

Feedback
Flashcards & Bookmarks ?
Please log in or register to use Flashcards and Bookmarks. You can also log in with
Flashcards ?
My bookmarks ?
+ Add current page to bookmarks
Mentioned in ?
References in periodicals archive ?
It will become apparent, we say, that he and she shared and encouraged each other in a venomous hatred for William Taylor.
Farmer's wife 'encouraged lover to murder husband'
Tampere added that they're hopeful of a fight with Taylor this year.
Tampere: Bring it on, Katie; WOMENS BOXING
Greg Taylor said in an email to Arkansas Business on Wednesday that the suspension "was an oversight on payment of annual dues which is now corrected." But as of Thursday morning, his law license remained suspended, according to Stark Ligon, executive director of the Supreme Court Office of Professional Conduct.
Taylor & Taylor Sues a Rival: Taylor & Taylor
Taylor Swift has become one of the highest earning artists ever.
A lot can be said about Taylor Swift
Taylor was found dead on the afternoon of March 9 and Hayley is still coming to terms with the death of her "brown-eyed boy".
'Some days I still can't get out of bed' devastated mum speaks of heartache on son's 18th birthday; Taylor Cusack was found dead at home in Bensham, Gateshead, and now the family face his birthday without him
Taylor said in the first half of 2015 a big driver for his business was the oil and gas boom, which fell off about mid-year.
Building on values: 'our wagon is not tied to one star,' says CEO of Louisville's versatile Taylor Group
Smith's audience is not other philosophers but rather practitioners, that is, "those of us living in this cultural moment, who feel the cross-pressures and malaise and 'fragilization' that he [Taylor] identifies." Though a very competent philosopher himself, Smith enhances his summary of Taylor's analysis with many examples of situations that ordinary practitioners experience.
Smith, James K. A.: How (Not) to Be Secular: Reading Charles Taylor
Moreover, if Taylor Swift tries to get friendly with the two current best friends, they will reportedly "walk in the opposite direction, ruining any plans Taylor might have to make it look like its all fine."
Katy Perry And Rihanna VS Taylor Swift: Best Friends To Even Scores With '1989' Singer At MTV EMAs; Revenge Plot Revealed
Now, Breckenridge is a key prosecution witness in Taylor's robbery and murder trial.
Girlfriend says Taylor issued threat
Taylor Made Marketing wants to help out the victims in a variety of different ways.
Taylor Made Marketing Aids in Hurricane Sandy Relief
BANKING AND CREDIT NEWS-June 20, 2012--Cole Taylor Bank doubles retail mortgage offices, adds 60 bankers(C)2012 M2 COMMUNICATIONS http://www.m2.com
-Cole Taylor Bank doubles retail mortgage offices, adds 60 bankers