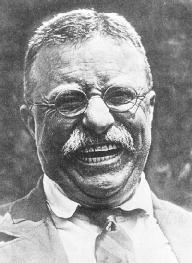 Feedback
Flashcards & Bookmarks ?
Please log in or register to use Flashcards and Bookmarks. You can also log in with
Flashcards ?
My bookmarks ?
+ Add current page to bookmarks
Mentioned in ?
References in periodicals archive ?
Could we see another Teddy Roosevelt in our lifetimes?
Crusading Teddy would be aghast at today's GOP
What makes Teddy Roosevelt especially relevant is that he began his storied career in the New York State Assembly.
For the record: Doris Kearns Goodwin
He will host dinners where Teddy Roosevelt in 1901 entertained the first African-American as a guest; command a military that was not officially integrated until 1948.
Conflicting challenges of first years in office
"I bought a very rare Teddy Roosevelt button, six inches across, for $30." Gottlieb has been collecting Roosevelt items since a fourth-grade field trip in 1976 to Oyster Bay, the 26th president's "summer White House" in New York.
A Calvin Coolidge potholder ... going once ... twice: now here's an auction for political junkies
The ad features Democratic candidate Terry Fowler and his catchphrase: "There's no way I'm carrying a stick." The catchphrase is a play on the Teddy Roosevelt quote "Speak softly and carry a big stick," Steve Spencer, Paschall's creative director, said.
Laugh it up
(There have been 43, so far.) These projects, such as making a nature sketchbook like Teddy Roosevelt's or a stovepipe hat like Abraham Lincoln's, will keep you nearly as busy as the men who have held this very demanding job, but you'll learn a lot and have fun, too.
Classy Presidents
It was also the time of Teddy Roosevelt's trust-busting activities.
A historical gem
3 The Roosevelt Corollary: "In 1904 Teddy Roosevelt declared that the U.S.
Political BS
The inaugural March 1907 issue included congratulatory letters written by such notables as Helen Keller, Mark Twain, Grover Cleveland, and Teddy Roosevelt. The March 2007 issue of the magazine includes reprints of some of these letters, as well as a selection of the newspaper articles that heralded the magazine's publication.
Magazine celebrates 100 years
The Democrats in 1998 captured control of the state senate for the first time since 1912, the year Republicans throughout the nation were divided by Teddy Roosevelt's Bull Moose rebellion.
Oh, blue Hampshire! New Hampshire will be, as usual, the site of the first presidential primary in 2008. Is it significant that in the elections of this past November, Democrats ruled in this Republican stronghold?
About as dull as a film could be with Attila the Hun, Teddy Roosevelt and lots of exotic wildlife rounding out the cast, this rambunctious, "Jumanji"-style extravaganza is a gallery of special effects in search of a story; rarely has so much production value yielded so little in terms of audience engagement.
An artless 'Museum'
As chaos engulfs the museum, a nefarious plot is revealed and Larry turns to President Teddy Roosevelt to help restore peace.
Also showing