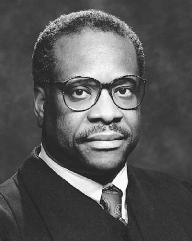 Thomas was born June 23, 1948, in Pin Point, Georgia, a small town near Savannah. He attended Savannah's Saint Benedict the Moor, Saint Pius X High School, and Saint John Vianney Minor Seminary. When he graduated from Saint John in 1967, he was the only African American in his class. After just one year as a seminarian at Missouri's Immaculate Conception Seminary, Thomas abandoned his plans to become a priest. Instead, he enrolled in Massachusetts's Holy Cross College. After graduating in 1971, he attended Connecticut's Yale University Law School, and earned a doctor of Jurisprudence degree in 1974.

Thomas married Kathy Grace Ambush in 1971. The couple had a son, Jamal Thomas, in 1973, and divorced in 1984. In 1986, he married Virginia Lamp, a political activist and a lawyer for the U.S. Labor Department.

Thomas's first job out of law school was as assistant to Missouri's Republican attorney general John C. Danforth. Thomas specialized in tax and environmental issues. In 1977, he accepted a position in the law department of Monsanto Chemical Corporation. Thomas returned to public service in 1979, when Danforth was elected to the U.S. Senate. Danforth invited Thomas to work for him as a legislative aide in Washington, D.C.

Thomas's star rose quickly during the Republican administration of President ronald reagan. In 1981, he was appointed assistant secretary in the civil rights division of the U.S. Education Department. It was here that his path crossed that of anita hill, a recent Yale University Law School graduate. In 1982, when Thomas became chair of the Equal Employment Opportunity Commission (EEOC), Hill also moved to the federal agency.

"We do not start from the premise that [statutory] language is imprecise. Instead, we assume that in drafting … legislation, Congress said what it meant."
—Clarence Thomas

In 1990, Thomas became a federal judge for the Court of Appeals for the District of Columbia. In 1991, President george h. w. bush nominated Thomas to the U.S. Supreme Court. During the confirmation process, Hill accused Thomas of sexually harassing her while she worked for him at the EEOC. After tense hearings before the U.S. Senate, Thomas was confirmed by a vote of 52–48. On October 18, 1991, he was sworn in as the 106th justice of the U.S. Supreme Court.

Thomas is known as a conservative justice, voting to uphold States' Rights and limit the powers of the federal government. He has frequently voted with Justice Antonin Scalia and Chief Justice william rehnquist. Legal commentators have noted that Thomas rarely asks questions during the Court's oral arguments. Thomas has not been the author of any ground-breaking decisions, but has written many dissenting opinions.

Several books have been published about the Supreme Court's only African American justice including two unauthorized biographies published in 2001. Numerous publishers sought the rights to Thomas's memoirs, and in January 2003, HarperCollins announced that it would publish Thomas's account of his life. Thomas received an advance of more than $1 million for the book, which is expected to be published in 2005.