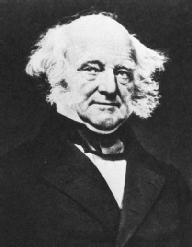 Prominent political leader, U.S. senator, Secretary of State, vice president, and eighth president of the United States, Martin Van Buren led the nation during its first major economic crisis. The New York native built a career based on machine politics—the control of local political power by a well-disciplined organization. Van Buren held top positions in his home state before entering national politics, where his instinct for party building helped create the Democratic Party in the 1820s. Elected vice president in 1832 and president in 1836, he sought to protect federal monetary reserves during the depression that began shortly after he took office.

Born in Kinderhook, New York, on December 5, 1782, Van Buren was the third of five children born to Dutch working-class parents. He began to study law at the early age of fourteen and gained admission to the New York bar four years later in 1803. He was elected to the New York legislature in 1812 and continued to be reelected until 1820. From 1816 until 1819, he also served as the state attorney general.

Van Buren's political views came directly from Jeffersonian Republicanism. Like Thomas Jefferson, he believed in States' Rights and opposed a strong federal government. During the early years of his career in New York, Van Buren controlled the so-called Albany Regency, a political machine that was very influential in state politics. Later, in the 1820s, he joined forces with Andrew Jackson and helped to forge the political alliances that would lead to the formation of the Democratic Party.

"Let them worry and fret and intrigue at Washington. Six weeks hence they will find themselves as wise as they were when they began."
—Martin Van Buren

As in state politics, Van Buren enjoyed steady success at the national level. He won election to the U.S. Senate in 1821 and retained his senatorial seat until 1828 when he became governor of New York. He resigned the office a mere twelve weeks later, however, to become secretary of state under President Jackson. His support of Jackson through the president's turbulent first administration paid off: in 1832 Jackson chose Van Buren as his vice presidential running mate over the incumbent john c. calhoun, and the two were elected.

Van Buren's own election as president in 1836 was precipitated by crisis. Under the Jackson administration, land speculation had run rampant nationwide. When Congress failed to intervene, banks issued great numbers of loans without backing them up with security. The speculation continued until Jackson ordered the government to accept only gold or silver as payment on land. The result was the so-called Panic of 1837, a devastating financial crash that led to the first large-scale economic depression in U.S. history. By 1840 Van Buren had convinced Congress to pass the Independent Treasury Bill. It provided for federally controlled vaults to store all federal monies; transactions were to be conducted in hard currency. The independent treasury protected federal deposits until 1841, when it was abolished. President james k. polk brought it back in 1846.

Van Buren sought reelection in 1840, running as the only presidential candidate without a vice presidential candidate in history. Defeated by William Henry Harrison, he attempted to gain the Democratic nomination again in 1844 but was unsuccessful. His popularity had deteriorated both because of the depression and because of his positions on other domestic issues. He opposed the annexation of Texas, which he feared would precipitate a war with Mexico, and an expensive war against Seminole Indians in Florida. He tried once more to win the Democratic presidential nomination in 1848 but was defeated again. He died on July 24, 1862, in Kinderhook, New York.

Feedback
Flashcards & Bookmarks ?
Please log in or register to use Flashcards and Bookmarks. You can also log in with
Flashcards ?
My bookmarks ?
+ Add current page to bookmarks
Mentioned in ?
References in periodicals archive ?
How could a man of humble origins, such as Van Buren, possibly hope to topple the dominant aristocrat of the state?
"The Duty of a Wise Governments": How Patronage Served the Republic in the Second Party System
Van Buren shows what a slipshod process it was, despite (or mostly likely in part because of) the many billions of dollars poured into the effort.
We Meant Well: How I Helped Lose the Battle for the Hearts and Minds of the Iraqi People
Of the many boondoggles witnessed by Van Buren is the Vatican-city-sized American Embassy in Baghdad and its staff ("male, pale, and Yale ...
We Meant Well
For $63 billion, by Van Buren's count (give or take a giant stack of bills or two), the "reconstruction" of Iraq in which he "served" amounted to a giant exercise in reckless, insincere waste and futility.
We Meant Well: How I Helped Lose the Battle for the Hearts and Minds of the Iraqi People
VAN BUREN: My friends were Ron Nagle and a guy named Joe White who still paints and lives in Washington, D.C.
In conversation: Richard Van Buren with John Yau
Prior to joining CBRE, Van Buren worked at General Electric and GlaxoSmithKline before building and managing sales organizations for Wolters Kuwer and Thomson Reuters.
CBRE picks Van Buren to head New York Tri-State division
"Now with the $13.5 million dollar expansion of the company's plant in Van Buren, AR, it is expected that we will grow our total sweet potato capacity even more than ever.
US Vegetable Producer Allens Inc. Expands in the Southwest and Northeast
The initial brainstorming session between Ruth Van Buren and Alfred Luckerbauer began during the ANMP convention in Las Vega, NV last October, 2009 and has since led to this exciting partnership.
Ruth Van Buren Teams with Action Marketing for European Expansion
Pressman said the Van Buren poster, which was carried in a July 4, 1840, political parade in Barre by townspeople from Templeton supporting William Henry Harrison, is the finest one-of-a-kind example of political folk art discovered for the exhibition.
Political art gets historical society some recognition; N.Y. museum will display unique poster
A number of years ago Allen Walker Read, a noted "naming scholar," spent more than three full years researching newspapers in Boston, New York, and Philadelphia to prove the origin of the expression "OK." He found that after its earlier uses, OK surfaced in connection with President Martin Van Buren's reelection campaign.
America - Naming the Country and its People. (Books)
Twin sisters Ann Landers and Abigail Van Buren, 83, were inducted into the 15-member hall at this month's American Association of Sunday and Feature Editors convention here.
TWIN INDUCTION FOR TWINS ANN AND ABBY
To answer this question, Kincade provides detailed studies of Martin Van Buren and George Bush, the only two men to have succeeded to the presidency following their terms as vice president.
Heirs Apparent: Solving the Vice Presidential Dilemma