(redirected from Wars of Independence)
Also found in: Encyclopedia. 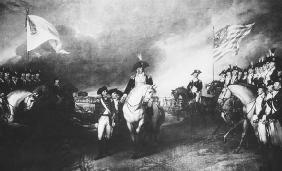 Following the defeat of British forces at Yorktown, Virginia, on October 10, 1781, General Charles Cornwallis surrenders to General George Washington, marking the end of major military actions in the War of Independence.

The War of Independence, also known as the American Revolution and the Revolutionary War, was fought from 1775 to 1783 between Great Britain and the 13 British colonies in North America. The 1783 Treaty of Paris, which ended the war, gave the 13 colonies political independence and led to the formation of the United States of America.

The war had its roots in the growing economic power of the colonies and the limited political freedom granted by Great Britain to the colonists for managing their affairs. Acts of British Parliament in the 1760s that imposed taxes and import duties on the colonies increased these tensions.

The British victory in the French and Indian War, also known as the Seven Years' War (1756–63), removed France as a power in North America, yet the costs of the war were staggering for Great Britain. Faced with a large national debt, Parliament passed the Molasses Act and the Sugar Act in 1764, which imposed a duty on molasses and sugar imported by the colonies. The Stamp Act of 1765 taxed papers such as legal documents, newspapers, and almanacs. The Quartering Act indirectly taxed the colonists by requiring them to house, feed, and supply British troops.

American colonists reacted angrily to these tax measures, believing that it was unfair of Great Britain to subject them to taxation when the colonies had no representation in Parliament. British leaders repealed the Stamp Act in 1766, but the following year Parliament passed the townshend act, which imposed a series of new taxes on goods arriving at American ports. The new taxes were designed to pay the salaries of royal governors and other colonial appointees of Britain's King George III. The Townshend Act also restructured the customs service in the colonies, placing its headquarters in Boston.

The Townshend Act evoked more protests from the colonists. Groups such as the Sons of Liberty and the Daughters of Liberty organized protests against customs officials and boycotts of taxed goods. Merchants agreed not to sell imported goods.

British customs agents in Boston extorted money and seized American ships with little justification, leading to a riot in March 1770. The British troops, popularly known as redcoats because of their red uniforms, fired on the crowd, killing five people. The episode became known as the boston massacre.

Great Britain again reacted to economic pressure by removing most of the Townshend Act taxes. A notable exception was the tax on tea, which remained a symbol of Parliament's authority to tax colonists. In 1773 Britain tried to save the financially troubled British East India Company by passing the Tea Act, which lowered the tax on tea shipped by the company to the colonies, giving the company an edge over tea smugglers. The colonists responded by refusing to buy English tea and refusing to allow it to be unloaded from British ships. In Boston protesters dressed as American Indians dumped crates of tea into the water, and the event came to be known as the Boston Tea Party.

Parliament retaliated in 1774 by passing the Coercive Acts, which were labeled the "Intolerable Acts" by the colonists. These laws closed the port of Boston until the East India Company was repaid for the dumped tea, restricted the powers of the Massachusetts colonial legislature, and permitted British soldiers and officials accused of capital crimes to be tried in England rather than in the hostile colony. In addition, Parliament appointed General Thomas Gage, commander of the British Army in North America, as the governor of Massachusetts. Gage was to enforce the Coercive Acts.

Representatives of 12 colonies and Canada met in September 1774 to consider what action to take against Parliament. The delegates to the First Continental Congress agreed that the colonies, and not Parliament, had the right to tax and make laws for the colonies. They called for a complete trade boycott against Britain until the Coercive Acts were repealed, but they acknowledged Parliament's right to regulate trade. The Congress did not call for independence from Great Britain.

The war began in 1775 when General Gage tried to break up a Massachusetts militia group and seize its ammunition and supplies. On the evening of April 18, 1775, Gage ordered his troops to seize munitions at Concord. Militia messengers, including silversmith Paul Revere, rode on horseback the 18 miles from Boston to Concord to warn the militia. Militia forces met the redcoats in Lexington, and they exchanged fire. The British killed eight men and proceeded to Concord, where they again encountered militia companies. The British retreated to Boston after 273 redcoats were killed in the battle. The militia followed, laying siege to the city for almost one year.

In early May 1775 colonial delegates met in Philadelphia for the Second Continental Congress. The New England militia was renamed the Continental Army, and George Washington, a Virginia plantation owner who had served in the French and Indian War, was named commander. The delegates also made the Congress the central government for "The United Colonies of America."

King George III replaced Gage with General William Howe. The king had become concerned over mounting British casualties that accompanied battles in Massachusetts, including the Battle of Bunker Hill. On August 23, 1775, the king declared the colonies to be in rebellion and subjected colonial ships to seizure.

American troops invaded Canada in August 1775, capturing Montreal in November. However, their efforts to take the city of Quebec failed, and the troops were forced to withdraw. During the winter of 1775–76, Washington positioned artillery around Boston. In March 1776 a massive artillery attack on the city led British troops and more than one thousand Loyalists (colonists who supported the British) to flee on ships to Nova Scotia, Canada.

In June 1776, as the British assembled reinforcements for an invasion, the Continental Congress debated a declaration of the colonies' independence from Britain. Thomas Jefferson borrowed from the recently completed Virginia Declaration of Rights in drafting the Declaration of Independence. The Virginia declaration, written by George Mason, stated that government derived from the people, that individuals were created equally free and independent, and that they had inalienable rights that the government could not legitimately deny them. On July 4, 1776, the Congress declared that the colonies were free and independent states, and it adopted the Declaration of Independence.

On June 29, 1776, Howe led an invasion force of 32,000 troops, including 18,000 German mercenaries (Hessian troops), that landed off Sandy Hook, New Jersey. The British attacked Washington's forces in New York on August 22, and by the end of the year Washington had abandoned New York City and had moved his troops into Pennsylvania. He made a successful surprise attack on Trenton, New Jersey, on December 25, 1776. On January 3, 1777, Washington's troops defeated the British at Princeton, New Jersey. The two victories were critical to maintaining colonial morale, and by the spring of 1777 more than 8000 new soldiers had joined the Continental Army.

The British implemented a plan in 1777 that sought to end the war that year by separating New England from the colonies in the south. General John Burgoyne led British forces from Montreal toward Albany, New York. After securing a victory at Fort Ticonderoga on July 5, Burgoyne became overconfident. The Continental Army and local militia counterattacked, forcing Burgoyne to surrender his army after a battle at Saratoga, New York, on October 17.

To the south, Washington vainly tried to stop the British from taking Philadelphia, the home of the Continental Congress. His troops lost at the battle of Brandywine Creek, and Philadelphia fell to the British on September 26. The Congress moved to Baltimore, Maryland.

Despite the loss of Philadelphia and some discontent with Washington's leadership during the winter of 1777–78, American fortunes brightened in 1778. In February France signed a formal treaty of commerce and alliance with the American states. France sent a naval fleet along with military advisers and financial aid.

In June 1778 Washington attacked the British at Monmouth, New Jersey, but again was defeated. He then shifted his military strategy, keeping his troops encamped around British forces in Connecticut, New York, and New Jersey. Although American forces led by George Rogers Clark regained control of the Ohio River Valley, British troops had success in South Carolina in 1779. However, in 1780 American troops prevailed in the Battle of Kings Mountain and again in the Battle of Cowpens in 1781. The British attempt to control the southern colonies ended in a stalemate.

In 1781 Washington's troops, with the assistance of the French Navy, cut off British forces led by General Charles Cornwallis at Yorktown, Virginia. The Battle of Yorktown, in which British troops were outnumbered two to one, ended in a British surrender on October 19, 1781. This marked the end of major military actions in the War of Independence.

The defeat at Yorktown led to the resignation of the British prime minister and a desire by the new cabinet to begin peace negotiations, which commenced in Paris, France, in April 1782. The U.S. delegation included Benjamin Franklin, John Adams, and John Jay. The negotiators concluded a preliminary treaty on November 30, 1782, and a final agreement was signed in September 1783 and ratified by the Continental Congress on January 14, 1784.

During the War of Independence, the Continental Congress struggled to formulate a constitution for the entity known as the United States of America. However, colonists were not interested in establishing a central government with broad powers because they feared replacing undemocratic British authority with a local version. Therefore, the Articles of Confederation that were drafted in 1777, but not ratified until 1781 by all the states, created only a national congress of limited authority. By the end of the war, Congress found itself receiving less cooperation from the individual states. The failure of the Articles of Confederation became apparent after the Treaty of Paris was ratified, leading to the Constitutional Convention in Philadelphia in 1787 where the Founding Fathers would write the U.S. Constitution.

York, Neil. 2003. Turning the World Upside Down: The War of American Independence and the Problem of Empire. New York: Praeger.

Feedback
Flashcards & Bookmarks ?
Please log in or register to use Flashcards and Bookmarks. You can also log in with
Flashcards ?
My bookmarks ?
+ Add current page to bookmarks
Mentioned in ?
References in periodicals archive ?
The report issued by Archaeology Reports Online points out the friar's skeleton was radiocarbon dated to AD1271-1320, adding: 'It is possible that this friar was a witness to some of the most significant events of the Scottish Wars of Independence during the late 13th and early 14th centuries, not least the battles of Stirling Bridge and Bannockburn.' The dig at the site also uncovered substantial medieval stone walls and finely carved archaeological fragments.
"The star of the show though was the burial of a friar, a man who lived during the Wars of Independence who could have seen Wallace, Bruce, Edward I and Edward II.
Remains dating back to wars of independence; Skelton discovered thought be from 13th century