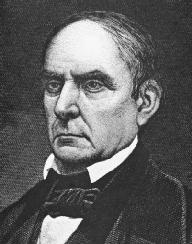 Daniel Webster was a nineteenth-century lawyer, representative, senator, Secretary of State, and one of the great orators in U.S. history. A man of prodigious talent and great political ambition, Webster reversed himself on issues involving the economy and Slavery in hopes of becoming president. As the greatest constitutional lawyer of his day, he helped shape the nationalist Jurisprudence favored by Chief Justice John Marshall.

Webster was born on January 18, 1782, in Salisbury, New Hampshire. He entered Dartmouth College when he was fifteen and graduated in 1801. He then studied law with an attorney in Boston before becoming a member of the New Hampshire bar in 1805. Webster moved to Portsmouth, New Hampshire in 1807 and quickly developed a legal association with the shipowners and merchants of the city. Webster became the spokesperson for the Portsmouth business community, who opposed the Jefferson administration's trade restrictions with Great Britain and France. His vehement denunciations of the trade embargo and the War of 1812 against Great Britain led to his election to the U.S. House of Representatives in 1812. He aligned himself with the pro-British Federalist Party and endorsed a strong national government.

"God grant liberty only to those who love it, and are always ready to guard and defend it."
—Daniel Webster

Webster left Congress in 1817 and relocated to Boston where he emerged as an eminent attorney, specializing in Constitutional Law. His reputation increased when he became involved in three landmark cases. In the first, trustees of dartmouth college v. woodward, 17 U.S. (4 Wheat.) 518, 4 L. Ed. 629 (1819), Webster successfully defended his former college against the state of New Hampshire's attempt to disregard the corporate charter of the school and make it a public institution. The Court, with Chief Justice Marshall writing the opinion, ruled that a corporate charter was a contract that could not be impaired. In that same year, Webster argued for the validity of the Bank of the United States and against the right of a state to tax a federal institution in mcculloch v. maryland, 17 U.S. (4 Wheat.) 316, 4 L. Ed. 579. Again, Chief Justice Marshall agreed with Webster's nationalist philosophy, finding that the Necessary and Proper Clause provided the basis for Congress's creation of a national bank and that "the government of the Union, though limited in its power, is supreme within its sphere of action."

Five years later, in gibbons v. ogden, 22 U.S. (9 Wheat.) 1, 6 L. Ed. 23 (1824), Webster argued against navigation monopolies granted by the state of New York to private individuals. Chief Justice Marshall and the Court sided with Webster, holding that the Constitution's Commerce Clause empowered Congress to regulate interstate commerce, establishing a precedent that had far-reaching effects in the economic expansion of the nineteenth century.

With these accomplishments to his credit, Webster returned to the U.S. House of Representatives in 1822, where he represented Massachusetts for the next five years. In the House he chaired the Judiciary Committee and opposed the 1824 tariff, believing that it would injure the merchant class. Following his election to the U.S. Senate in 1826, however, Webster made one of his famous reversals and embraced the need for a tariff. He endorsed the tariff of 1828.

Webster's skills as an orator were renowned. Oral arguments before the Supreme Court could last several days, requiring attorneys to have both mental and physical stamina. Webster excelled in oral argument but he was also famous for his public addresses. In 1826 he delivered addresses on the deaths of John Adams and Thomas Jefferson. In 1830 he debated Senator Robert Y. Hayne of South Carolina, who favored a coalition between Western and Southern states to benefit both areas in tariffs and land prices. Webster opposed this sectionalism and denounced the doctrine of nullification, which upheld the right of a state to declare a federal law invalid within its boundaries. Webster's phrase "Liberty and Union, now and forever, one and inseparable!" came from the Hayne debate and helped cement his popularity in the North.

In 1836 Webster abandoned the Federalist Party and helped form the Whig Party, made up of groups opposed to President Andrew Jackson and the Democrats. He was considered for the Whig presidential nomination in 1836 but was defeated. In 1841 President William Henry Harrison appointed Webster secretary of state. When Harrison died shortly after taking office, President John Tyler asked Webster to remain at his post.

The Tyler administration was a troubled one, largely because Tyler was a Democrat with a cabinet of Whigs. His decision to reject a Whig measure establishing a new national bank caused a revolt in his cabinet, with most members resigning in protest. Webster alone remained to aid Tyler, motivated by the possibility of becoming his vice-presidential running mate in 1844. However, Tyler was not renominated. As secretary of state, Webster did negotiate the Webster-Ashburton Treaty, which established the boundary line for Maine.

Webster returned to the Senate in 1845, with his salary supplemented by a fund raised by Boston and New York businessmen. Critics charged that he had surrendered his political independence to manufacturing interests. As a senator he opposed the Mexican War and the acquisition of Texas. He opposed slavery but feared civil war. Because of this fear Webster supported the Compromise of 1850. This act admitted California into the Union as a free state, gave the Utah and New Mexico territories the right to determine the slavery issue for themselves at the time of their admission to the Union, outlawed the slave trade in the District of Columbia, and gave the federal government the right to return fugitive slaves under the fugitive slave act (9 Stat. 462).

In 1850 President Millard Fillmore appointed Webster secretary of state. He used his influence to enforce the Compromise of 1850, especially the Fugitive Slave Act. Though the act was unpopular in the North, Webster sought to demonstrate to Southern politicians his determination to uphold the law. Aside from promoting national unity, Webster dreamed of a "Union" party that would help make him president in 1852. However, Webster died on October 24, 1852, at his farm in Marshfield, Massachusetts.