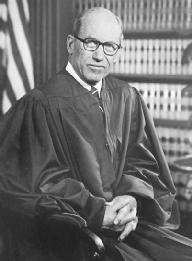 Byron Raymond White sat on the U.S. Supreme Court as an associate justice from 1962 to 1993. White had an eclectic career. He was a college and pro football star during the 1930s and 1940s and an assistant attorney general under robert f. kennedy from 1960 until 1962, the year his friend President john f. kennedy appointed him to the Supreme Court. As a justice, White charted a pragmatic and low-key course on the bench: he enunciated no single judicial philosophy, although judicial restraint sometimes appeared as a feature of his reasoning. For part of his career, he was seen as a moderate. Toward the end, however, he voted conservatively on social issues such as abortion, affirmative action, and Gay and Lesbian Rights.

Born on June 8, 1917, in Fort Collins, Colorado, White was the son of working class parents. As a youth, he picked beets in the poor community, but he excelled in athletics and scholastics. He attended the University of Colorado on an academic scholarship and, in 1937, became the premier running back in college football. So accomplished was "Whizzer" White on the gridiron that when he threatened not to play in the Cotton Bowl—because it would interfere with his studying—the state's governor intervened in order to convince him to play. He graduated in 1938 as class valedictorian.

White's journey to the bench was not direct. In 1939, he accepted a Rhodes Scholarship to study at Oxford University in England, where he became a lifelong friend of John F. Kennedy. He subsequently played in the National Football League and led the league in rushing while also studying law at Yale University, where he graduated with high honors in 1946. During World War II White joined the U.S. Navy and served in the Pacific. After the war, he clerked for Chief Justice fred m. vinson from 1946 to 1947.

For the next 13 years, White practiced law in Denver, Colorado. His organizational support for the presidential candidacy of John F. Kennedy led to his being appointed second in charge of the Justice Department in 1960. After two years of selecting judges and helping steer the department's support of the Civil Rights Movement, White was nominated to the Supreme Court to fill the vacancy created by the resignation of Justice charles whittaker.

White's tenure on the Court was marked by judicial pragmatism and unpredictability. Defying expectations that he would be a centrist, White swayed between liberal and conservative positions. He consistently supported the constitutionality of Civil Rights reforms during the mid-1960s in cases dealing with voting rights. Thirty years later, he continued to take a firm stance on the issue of School Desegregation: in 1992 he wrote the majority opinion in U.S. v. Fordice, 505 U.S. 717, 112 S. Ct. 2727, 120 L. Ed. 2d 575 (1992), which ordered Mississippi to take additional steps to desegregate its state colleges.

White's tendency to vote conservatively also became apparent early in his tenure on the Court. In 1966, he dissented from the Court's decision in Miranda v. Arizona, 384 U.S. 436, 86 S. Ct. 1602, 16 L. Ed. 2d 694 (1966), which established the so-called Miranda Rule requiring police officers to read arrested persons their constitutional rights. Believing that it would only weaken the ability of the police to do their job, White called the decision "a deliberate calculus to prevent interrogations, to reduce the incidence of confessions and pleas of guilty and to increase the number of trials."

This conservatism was grounded in pragmatism. In 1972, White was one of two justices dissenting from the majority decision that established a woman's right to abortion (Roe v. Wade, 410 U.S. 113, 93 S. Ct. 705, 35 L. Ed. 2d 147 [1973]). His four-page dissent avoided the moral issues involved and attacked the majority's reading of the Constitution: they had exceeded the Court's power. He could find no constitutional basis for "valu[ing] the convenience of the pregnant mother more than the continued existence and development of the life or potential life that she carries." Similarly, his 1986 majority opinion in Bowers v. Hardwick, 478 U.S. 186, 106 S. Ct. 2841, 92 L. Ed. 2d 140 (1986) dispassionately held that a Georgia statute criminalizing sodomy—oral and anal sex—did not violate the constitutional rights of homosexuals. He simply found no "fundamental right to engage in homosexual sodomy" and refused to find a new right in the constitution's due process clause. Doing so, he wrote, would make the Court vulnerable to criticisms of judicial activism.

In the 1980s and 1990s, White's liberal tendencies were all but exhausted. He frequently sided with the conservative voting bloc on the Court. In case after case, he joined the conservative majority in opposing abortion rights, curtailing affirmative action programs, restricting federal civil rights laws, and allowing the use of illegally-acquired police evidence in court. As was his wont, he uniquely refused to read his opinions from the bench and, instead, merely indicated whether the Court upheld or reversed the decisions of lower courts.

"The Court is most vulnerable and comes nearest to illegitimacy when it deals with judge-made constitutional law having little or no cognizable roots in the language or design of the Constitution."
—Byron R. White

After retiring from the Supreme Court in 1993, White continued working in the legal arena. He occasionally served as an appellate court judge and he was chairman of the Commission on Structural Alternatives for the Federal Court of Appeals from 1997 to 1999. White died on April 15, 2002, in Denver, Colorado, at the age of 84.